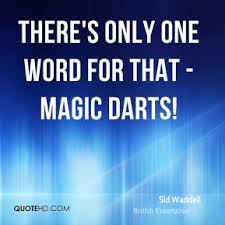 Despite being a fan of the sport in my teens and early 20’s, I’ve not watched darts for years. Watching the report, I struck me how the ‘go to’ liquid refreshment of contemporary chucker’s has evolved. Their preferential drink between throws now water, rather than something an alcoholic nature.

In the late 70’s/early 80’s, during games the likes of Jocky Wilson, Eric Bristow, Bobby George or Mick ‘Magic Shoes’ Templeman would down pints of beer like it was going out of fashion……… It wasn’t going out of fashion, of course, unlike Jocky’s crinoline slacks which diminished the Scot’s certain sartorial elegance at the oche. 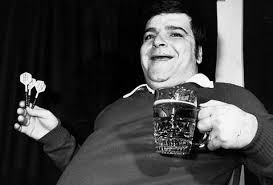 By the way, if you’re wondering who Mick ‘Magic Shoes’ Templeman was don’t bother googling it as I made up the name. A consequence of me struggling to recall player names from that era, apart from Wilson, Bristow and George obviously.

You can google Mick ‘Magic Shoes’ Templeman if you want, but I suspect it won’t return that it was the name of a 1980’s darts player. If it does I’ll show my arse in John Lewis’ window! ….. Actually I best google that myself, as I don’t want to risk a charge of indecent exposure, if I lose.

There was a bike racer of that name and a bloke who fits combi boilers. In addition to that it referenced a bloke of that name who was arrested for showing his arse in John Lewis’ window.

One of the above was a lie by the way! I suspect you won’t need Poirot to work out which one! …….. As an aside, if you require a new boiler, Mick ‘Reasonable Boiler Prices’ Templeman seems quite competitively priced.

In the halcyon days of 1980’s, I used to admire the skill of the guys who played the game at the top level under the influence of so much alcohol.

To reign victorious one of the participants has to finish with a ‘double’. Incidentally, that’s a number on the dartboard not two shots of whisky. The amount of booze some of them downed they must have been seeing two ‘doubles’, requiring additional levels of skill.

At that point in my life, not only did I have an interest in darts, I was similarly enthusiastic about snooker. In fact, I was a member of a snooker club for a while.

I once got to the final of a works knockout snooker tournament. It took place through the course of an evening somewhere in Sunderland; I suspect it was the Sunderland Snooker Centre but I’m guessing.

The only thing I am certain of was that it wasn’t Tesco’s in Sunderland, or any other supermarkets….. I hope that helps you when attempting to build a picture of this fascinating anecdote.

Anyway, I got to the final but due to a combination of over indulging on beer, in association with not wearing my contact lens, my last performance left a lot to be desired. Consequently, much to my chagrin, I was defeated by a bloke from the accounts department.

A close mate didn’t seem as upset as I was about my defeat. At the beginning of the final, I overheard him tell someone “He’ll be unbearable if he wins!” I think it was him anyway I couldn’t actually make him out visually at that point!

Professional snooker players in those days also liked a drink when they played; unlike now when the rewards on offer generally ensure sobriety during frames.

In the 1970’s,I recall one Canadian player Bill Werbeniuk was reputed to require six pints of beer before a game just to calm his nerves. He would follow this up by downing a pint every frame……….. At the time I knew plenty of lads with similar thirsts; only without the desire to play snooker during the evening.

Werbeniuk’s boozing antics were legendary at the time. Allegedly, his most famous feats of drinking include: –

76 cans of lager during a game with John Spencer in Australia in the 1970s; and 43 pints of lager in a snooker match/drinking contest against Scotsman Eddie Sinclair. After Sinclair had passed out following his 42nd pint, Werbeniuk was reported to say “I’m away to the bar now for a proper drink” 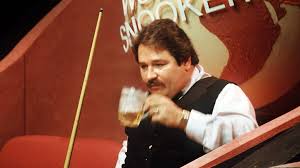 Things got so bad at one point, he was so drunk he lost a game to fictional darts player Mick ‘Magic Shoes’ Templeman. Although, he got revenge when he beat Templeman at darts!

The Winnipeg born player sadly, but perhaps not surprisingly, died of heart failure at the age of 56 in 2003.

He was instantly recognisable by his portly physique, moustache and beer at his side. He was known as ‘Big Bill’ which was accurate, but whose lack of creativity left it gongless at the ‘1975 Best Nicknames Of Portly Chap Awards’!

Talking of nicknames takes me back to the first paragraph and Brian Dawson’s darts victory over fellow Yorkshireman John Walton.

It’ll come as no surprise that Walton has the nickname ‘John Boy’, after the favourite son of the fictional, Blue Ridge Mountain dwelling, Walton family………… Unless you’ve never heard of the 1970’s US drama The Waltons, then you won’t have a chuffing clue how he got that nickname.

To close, I just wanted to say “Goodnight John Boy!” and “Congratulations Brian lad!”. To quote the legendary late darts commentator Sid Waddell “There’s only one word for that: magic darts!”