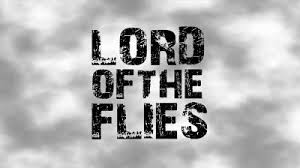 I’ve just finished a very simple, but satisfying, breakfast of marmite on toast. It’s was by no stretch of the imagination a culinary masterpiece, of which would grace the recipe books of Jamie Oliver, James Martin or Oasis lead singer Liam Gallagher. However, those two toasted pieces of bread smothered with vegemite meant my day started contentedly with warming comfort food.

Liam Gallagher – He’s not as accomplished at songwriting as brother Noel, but try his recipe for walnut cake; it’s exceptional!……. Unless you have a nut allergy, of course! 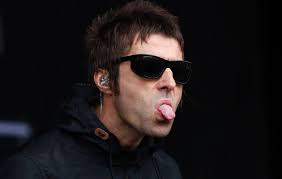 Now, even if I get trampled by a marauding herd of wildebeest on Garforth Main Street later this afternoon, at least I can say I that today provided me with a fulfilling breakfast!

I’d be able to lie in my hospital bed, heavily bandaged from head to foot, content that although covered in hoof marks and the owner of several broken bones, I’d not missed out on my marmite on toast earlier!

Even if I overheard the hospital porter telling an attending nurse “That must be good watch he’s wearing. It survived a wildebeest stampede! …. I’m having that when he falls asleep!” my spirits won’t be dampened!

I am a big advocate of the theory the first meal of the day is key to sustaining energy and concentration levels throughout your day. There is another part to this theory, but I’m too tired and listless to remember what that is!

My siblings and I had the importance of breakfast drummed into us by our parents. At least that’s the impression we got when very morning, as kids, our mother would tell us “Breakfast is important!”

When one of us asked why, she was never sure and would quickly feign a sneezing attack or change the subject by telling our father “Malcolm, your flies are open!” Regardless of this, we trusted her advice and have generally adhered to it ever since.

One morning during breakfast in the late 1970’s, my dad inadvertently invented a way of giving a kitchen wall a decorative makeover.

At the time our Ian and Helen were sat opposite him at the kitchen table eating cereals, prior to heading off for school. Dad was similarly consuming his breakfast, as was I whilst sat adjacent to him on the bench.

Without warning our pater, who had a mouthful of All Bran cereal at the time, violently sneezed. This was done with such velocity that the contents of his mouth rendered the wall behind my siblings with a sort of woodchip effect! 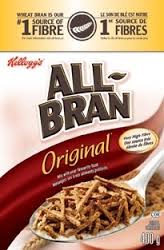 Luckily for Ian and Helen they took evasive action, otherwise their faces would have possibly required sandpapering prior to going to school! As my dad recomposed himself, mum shook her head in despair and promptly named Mally’s mishap as an act of “All Branning it!”

She then assisted in the clear up, during which she reminded dad that his flies were open as usual.

Mally ‘All Branning it!’ 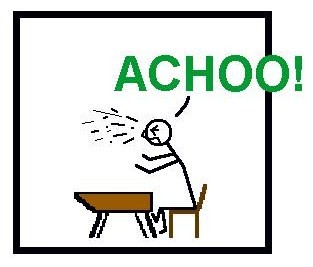 After the incident our Ian said he might not be able to make school, due to the stress of nearly having his face sandblasted! Mum was having none of it mind you and promptly told him “Get your coat on, your going!”

It didn’t take long for him to get over it, as within minutes our Ian was running down the street with a haversack on his back and a neighbour’s cat under his arm!

When he got home Ian explained he wanted the cat for the school play, in which he playing Hamlet. Mum pointed out she didn’t think there was a cat in Hamlet, to which he responded “I know, but at least I stopped it crapping in our front garden!”

My brother did have a stage when he skipped breakfast, but that was in his single adult days when he substituted brekkie for extra few minutes in bed; in addition to growing tired of having cold kebabs before work!

As I look down, during a break in penning this monologue, I notice my burgundy woollen sweater is covered in breadcrumbs from my recently eaten toast. I’ve made such a mess I resemble a giant fish finger!

A giant claret coloured fish finger that needs a gym session or two, a cup of tea and to stop writing so it can get its arse in gear ready to venture into Garforth.

Wildebeest stampede – I’m hoping to avoid this in Garforth later! 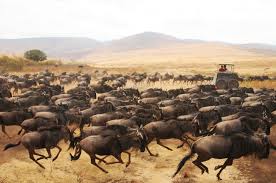