Despite having an interest in history, I don’t recollect a great deal about the Napoleonic Wars from my schooldays. In fact I don’t remember much about my schooldays if truth be told, although in my defence it was over 30 years ago!

What immediately springs to mind when I hear the name of Napoleon isn’t his distinguished military achievements in numerous battles. Moreover, I tend to think of his abject failure at Waterloo!

He may have had a list as long as your arm victories in battle. However, I’ll always recall the Corsican born leader as the man who absolutely ruined that ABBA song, at the French army karaoke night!

Additionally, I recall much was made of the fact Napoleon was depicted as employing a stance where he hid his hand in his waist coat. Although there are many theories on the cause of this, I’ve never read a definitive reason why he adopted this stance. 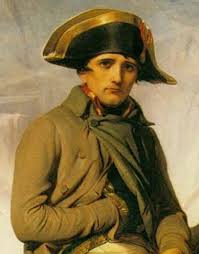 Whilst researching online for this narrative, I’ve read various explanations as to why he hid his hand in his waistcoast. They include:-

Napoleon had a stomach ulcer,

he was winding his watch,

he had an itchy skin disease,

that in his era it was impolite to put your hands in your pockets,

he had a deformed hand,

It has to be said, I’m not convinced about some of those assumptions. For instance, constantly hiding his hand as it was deformed seems a tad sensitive, in particular for such an decorated leader of men (he was apparently emulsioned green before every battle)!

A similar deformity never held back the late entertainer Jeremy Beadle from making a living! He embraced his withered hand; feeling hiding it would draw more attention to his “difference”!

Beadle felt there was nothing to be ashamed about and refused to hide his deformed metacarpus …… Well, apart from a sketch in which he played Napoleon!

Further theories quote historians arguing that there was nothing physically untoward with the commander. They go on to counter that this pose was a common stance for men of breeding in that era.

Another school of thought advocates that the “hand-in-waistcoat” posture signifies Napoleons “manly boldness tempered with modesty.”

The only thing that can be ruled out is a French historian’s theory, which claims Napoleon adopted that stance as he didn’t want to shake Chelsea footballer John Terry’s hand because he’d slept with his wife!

In his 1975 movie Love & Death, Woody Allen plays a character (Boris Grushenko) unwillingly conscripted to the Russian army to fight against Napoleon’s French troops, who early in the 19th century invaded Austria. 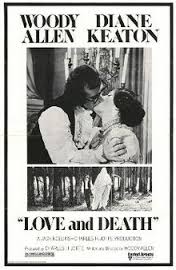 In this satirical movie of Napoleonic times in Russia, the cowardly Grushenko falls in love with Sonja, played by Diane Keaton. However, much to his chagrin, she is smitten by his brother Ivan, who spurns her and marries Anna.

When Ivan is killed fighting Napoleon’s troops, Anna, aware of Sonja’s love of her late husband, shows there is no animosity by bequeathing her some of his possessions.

In a touching conciliatory gesture, Anna (who kept her late husband’s sword and gold watch) gives her jilted rival Ivan’s moustache and string. They also agree to share his letters, with Anna getting the vowels and Sonja taking the consonants!

Her husbands gold watch must have been a more accomplished keeper of time than Napoleon’s, as Ivan didn’t constantly have his hand in his waistcoat winding it up, as rumoured to be done by the French commander!

I’m a big admirer of Woody Allen’s movies, particular from that era. I found the quick gags, visual comedy, along with the angst and insecurity portrayed by Allen’s characters incredibly funny.

Although, nowhere near as high brow or “clever” as his later work, if given the choice of which films of his to watch, I’d probably start with Love and Death, Bananas, Take the Money and Run, Play it Again Sam and Sleeper before moving on to his highly acclaimed later movies.

I recollect watching Take the Money and Run in the mid 1970’s with my brother Ian. We watched it in the room we shared in our modest three bedroom semi.

We viewed the movie on an old black and white TV, which took a few minutes to warm up, not to mention a couple of thumps to stop the picture scrolling!

In fact, it was so old it probably was around during the Napoleonic wars! Although saying that TV hadn’t been invented by John Yogi Bear by then, so that’s unlikely!

Mind you, the wait for the TV to warm up turned out to be worth it that evening. Ian and I spent the next hour and a half with aching ribs, laughing uncontrollably at the bespectacled comic actor’s wacky movie.

We were guffawing so much that our mum came upstairs to see what we found so funny. She also requested we quieten down a bit, so that we didn’t wake our younger sister Helen up. 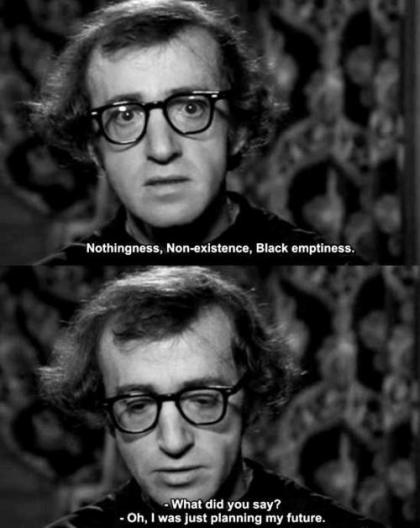 To close I wanted to share an example of the mock philosophical jousting in the film Love and War between Keaton and Allen. This type of banter is a recurring theme throughout the movie. As a fan of such pretentious dialogue, I was particularly fond of these interactions. An example of which is below:-

Sonja (Diane Keaton): “Judgment of any system, or a prior relationship or phenomenon exists in an irrational, or metaphysical, or at least epistemological contradiction to an abstract empirical concept such as being, or to be, or to occur in the thing itself, or of the thing itself.”