It’s Monday 19th March 2018. The snow has melted and the oft suffering shrubs are enjoying respite from the ferocity of the now departed easterly gusts. Consequently, a rare serenity engulfs the back garden as the spring daffs, tulips and tete-a-tete’s tentatively peer above soil as if to ask “Is it safe to come out yet, Gaz?….. And did you see Countryfile last night on TV? John Craven’s falsies were on whistling overdrive!”

The inaugural blooms of the year reticent to show their hand in the seemingly constant frozen early spring temperatures. My wife is currently googling*** ‘Overcoats for spring bulbs’ in a bid to coax colour dans notre jardin.

*** – Other search engines are available. However, I suspect they will prove as inept at find clothing for spring flowers as google.

As I was in the north east of England attending a funeral today, I picked my wife up from her parents house in Birtley, where she’d been in situ since Thursday. Due to artistic differences (we can’t agree whether Chopin was a painter), it was the first time I’d seen her mutha and fatha for about five years.

How I’d missed their warm welcomes, lack of teeth and inability to say the word hearse (which they pronounce as hearst). Now less confrontational, they’ve finally accepted my argument that Chopin was indeed a composer, not the bloke who painted the Christine Chapel…… I think they meant Sistine!

Sadly, it was a brief chat to my betrothed’s mater and pater as I wanted to get back to Leeds to warm my bulbs….. Incidentally, that’s not a euphemism……. If it was a euphemism, I wouldn’t have had to drive the 90 mile journey home to warm my bulbs – The mother-in-law’s got a blow torch, which I’m sure she’d have no qualms about using.

Seriously, though, I’m flattered that my wife Karen’s mum made the effort to wear her new hearing aids for my visit. The aforementioned sound enhancers ordinarily saved for best, making my arrival in Birtley feel like a royal visit.

The funeral I attended took place in Gateshead, paying respects for the life of a good friend’s mother. A sad occasion, but it was a good send off, proceeding as well as these sombre life events can do.

My mate (also named Gary) is the salt of the earth – So much so slugs and snails routinely give him a wide berth. My brother Ian and I have been friends with him since the spring of early 1970’s. A utopian era when we’d play football in my parent’s garden, jumpers for goalposts, where the unforgiving Wembley Trophy football would frequently damage my dad’s bulbs…… Incidentally that is a euphemism, resulting in the necessity of my pater wearing a cricket box when Gary visited. 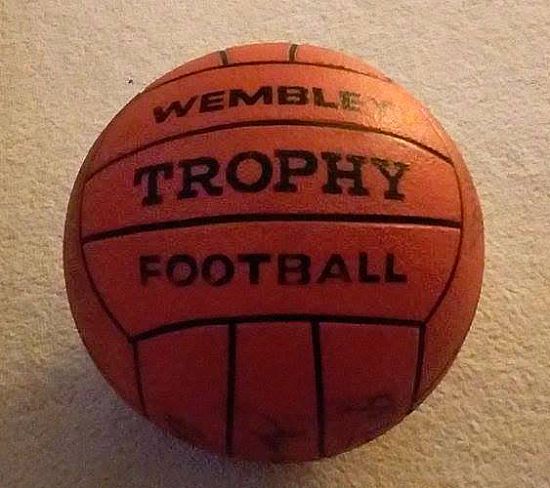 During our fledgling years, the iconic 1970’s Mettoy Wembley Trophy football, orange of colour and plastic of material, was the ‘go to’ choice of ball for my compatriots and I.

Utilising significantly more plastic than it’s competitors, the sports sphere used to sting like hell when striking the victim from short range…… In these contemporary times, I’d proffer the resultant discomfort akin to that of having a paintball strike you from close quarters……. It also left similar skin redness.

After I picked my spouse up from her parents and exchanged disparaging looks, donkey bites and Chinese burns with the in-laws, Karen and me headed homeward bound on the A1 south. During a relatively quiet journey traffic wise, I pondered what I’d pen in today’s narrative, or even if I’d have time to produce one.