During a recent discussion about journey distances, an old acquaintance asked me how far my east Leeds residence was from my mother’s Wakefield domicile. As I’ve never been inquisitive enough to record the exact mileage, it was a question I couldn’t answer with any real accuracy.

This being the case, I responded with the tongue-in-cheek quip “If you drive a steady 70mph on the M1 between junctions 46 and 41, it’s the duration of the first three songs on Matt Monro’s greatest hits album.”

Before proceeding with this narrative, I’d like to point out I’m aware this is a deeply flawed journey guidance strategy. One which is unlikely to be embraced anytime soon by GPS designers. For a multitude of reasons, SatNav’s being calibrated to give indicative travel data by song/album duration is quite clearly not fit for purpose.

Anyway, although my response of the longevity of Matt Monro’s songs was obviously a joke, my buddy responded “Not too far to your mum’s house then. Roughly 10.8 miles.”

How this acquaintance knew the initial trinity of songs on Monro’s album would conclude at that specific mileage (if driving at a steady 70mph between junction’s 46 and 41 of the M1) I’ve no idea. However, my lack of curiosity at his deduction process led me to let the conversation peter out.

This interaction, though, brought to mind existential odysseys of youth, in particular the longevity of accompanying albums we’d listen to during travel.

For instance, I concluded my regular childhood summer holiday journey from Gateshead to Reighton Gap, on the east Yorkshire coast, usually took two and a quarter plays of my dad’s Simon & Garfunkel greatest hits cassette.

Using the same format, though, gauging away trips to cricket grounds of my youth was significantly harder to deduce. The degree of difficulty exacerbated by a plethora of contributory parameters.

To clarify, the quantity of music played would have depend on who was driving and their musical tastes. For example, one of the faster drivers in the 2nd team often played Meatloaf albums en-route to our hosts domain.

His trip from Gateshead Fell’s Eastwood Gardens ground to South Shields cricket ground generally concluded during the American singer’s twelfth track on the ‘Bat Out Of Hell’ cassette……. Ironically, bat out of hell could also be used to describe his reckless exuberance with a cricket willow.

Elder cricketers in the 3rd XI tended to drive slower and have similarly more pedestrian paced musical preferences. One grey Sunday afternoon around 1980, a couple of us younger players got a lift with a team-mate approaching his dotage, our destination Eppleton cricket club, in County Durham.

During this journey his slow driving meant we were subject to almost two full plays of his favourite album ‘The Wisconsin Male Voice Choir Sing Sinatra’……. His excessive caution at the wheel leading to fears he’d be arrested for kerb crawling on the Felling Bypass.

In my later cricket playing days for Colton cricket club in Leeds, there were many scenic away odysseys to some truly beautiful parts of West Yorkshire. In particular, grounds blessed with residence in the aesthetically majestic Dales.

The Aire/Wharfedale League can boast countless venues of scenic splendour. Although some, such as Upper Wharfedale’s home in Grassington, take over an hour to reach…….. Or one and a half plays of ‘Alvin & The Chipmunks – Live at Shea Stadium’ to be more specific…… For some reason my teammates weren’t that keen on travelling in my car to away games. 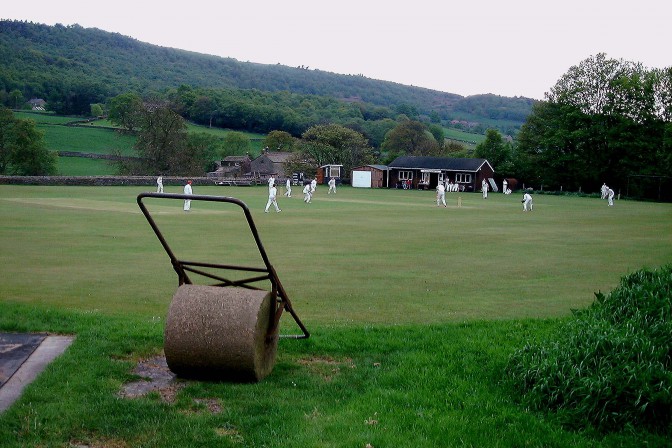 The West Yorkshire market town of Grassington is adjacent to Malham with it’s awe-inspiring limestone geology. Rocks which formerly resided in the Scottish Highlands, until their slow crawl south during the Ice Age. Glacial indolence taking thousands of years…… Or to be more precise four million and twelve plays of Don McLean’s extended version of  ‘American Pie’.

My favourite segment of this charming sojourn is the meander via the narrow dry-stone walled roads of Addingham and Bolton Abbey. The latter a 12th century Augustine Monastery whose adjacent settlements feature in the Domesday Book. This weighty manuscript an early version of the Wisden cricket tomes, only without the cricket references…… Actually, scratch that analogy, it’s chuff all like the Wisden volumes, it’s an early-day survey!

However, if you are within that demographic hopefully you’ll appreciate these my mid-Bowie-fest literary effort.