There are numerous metaphors used attempting to explain the challenges of living with depression. Descriptions of living in a void, experiencing hollowness, feelings of an explosion or fire in the head, as well as others surrounding self harm and increased awareness of ones own mortality.

As I’ve written before, I have a friend with depression, who I recently attempted to engage in a discussion of his darker times. A self delegated mission endeavouring to increase my understanding surrounding the subject of mental illness.

A topic that despite recent huge strides remains a poor second to physical ailments with regard investment – A mind behavioural affliction lots still perceive as merely a consequence of the sufferer’s over-sensitivity and weakness.

Initially he told me to mind my own business. However, after I gave him £2.53 in copper, told him of a great ‘3 for 2’ yoghurt offer at Tesco and promised not to mention the ‘horse incident’ again he relented.

When he did open up, my friend described his life as a double edged sword – Telling of a mind constantly making sorties down various avenues, returning with innovative epiphanies, as well as useful reminders like he needs to pay his gas bill, along with the importance of seeking out great ‘3 for 2’ yoghurt offers.

Unfortunately, that same prolifically creative mind also displays a propensity to wreak negative chaos, ultimately dragging him down – Filling him full of self loathing and doubt. Incidents of profound sadness; soul destroying episodes of loneliness, along with times of torturing agoraphobia.

Which of the many metaphors surrounding his neurological nemesis does he subscribe to I probed. My buddy responded the ‘black rod’ comparison utilised by a section of fellow sufferers was the most accurate metaphor he’d come across. 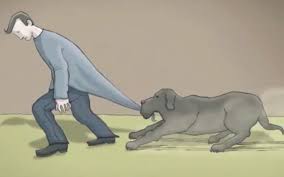 “Do you not mean ‘black dog’?!” I questioned. Adding “I think ‘black rod’ is the guy who robustly knocks on the door with a pole during the annual State Opening of Parliament.”

“No I mean ‘black rod.” he replied firmly. “It feels like my head is being relentlessly banged with a pole by a guy dressed in black!” he explained.

I conveyed to my friend, who wishes to remain anonymous, “That sounds a real pain in the ass, Frank Artichokes of 123 Horseguards Crescent, Thacklethwaite”

Admittedly, It wasn’t the most insightful thing I’d ever said, but what do you say to people with depression? I did ask him was there anything constructive I could do to help him, to which he responded “Yes, you could build me a patio.”

My limited understanding of the illness advocates you provide a listening ear, a caring demeanour, support and re-assure them they aren’t alone and ensure they take their medication – DON’T say “Snap out of it!”

I should also add DON’T say “That sounds a real pain in the ass, Frank Artichokes of 123 Horseguards Crescent, Thacklethwaite”, as it isn’t helpful and you’ll blow his anonymity……. Although, it appears I already have!

They are easily achievable actions for the carer that, I’m told, can make a huge difference in banishing ‘black rod’…… For the short term at least.

I found it an enlightening to engage my friend in the topic of depression. He spoke of the cathartic properties of a simple chat – Cheekily adding there is nothing more simple than my verbal meanderings. This backed by how our verbal interaction appeared to lift him.

I’ve learned and hopefully grown from our conversation. One thing for sure is I’ll never watch the State Opening of Parliament again without thinking about Frank Artichokes of 123 Horseguards Crescent, Thacklethwaite.

Actually coming to think of it, I never watch State Opening of Parliament anyway as it’s boring as hell……. Strike that from the record, clerk. 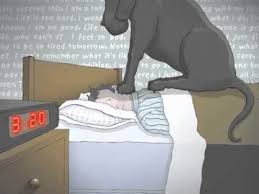 ** ‘Black rod’ was of course fictional. The ‘black dog’ depression awareness campaign, however, is very real. The text below giving a brief explanation of ‘black dog’ is taken from the website – http://www.blackdoginstitute.org.au :-

‘Black dog’ is a powerfully expressive metaphor that appears to require no explanation. The combination of ‘blackness’ with the negative connotations of ‘dog’, noun and verb, seems an eminently apt description depression an ever-present companion, lurking in the shadows just out of sight, growling, vaguely menacing, always on the alert; sinister and unpredictable, capable of overwhelming you at any moment, the ‘dark hound’ is an archetypal object of fear in folklore and myth.