We had an early reveille this morning, as consequence of my wife Karen’s appointment at a health centre in Leeds.

Despite the unforgiving chill of the Spring breeze, it was heartening to see the sun shine with an enthusiasm not seen of late.

Sitting in the waiting room, I looked out from a lofted view to observe clusters of daffodils in the distance. From my viewpoint they appeared to have been strategically planted to greet the visitors with a message.

Despite my admiration of whoever undertakes the artistic planting of bulbs at the centre, why a health centre’s garden in Yorkshire, England, would show the floral message of “Mitt Romney for President” baffled me.

As I scrutinised the view further I clapped eyes on busy chaffinches, blackbirds and snow eagles. They darted around displaying the work ethic of a Trojan as they scavenged seeking raw materials of moss and twigs for their nests.

I’m not sure if Trojans had a strong work ethic, nevertheless it sounds an impressive simile. Likewise the snow eagles were added for effect. I was always told “If your gonna lie about something make it a doozy!”……. Richard Nixon taught me that! ……. By the way, that’s not the ex-US president; it was the bloke who changed my car exhaust last month. Advice he later backed by charging me £2500 to replace my oscillators.

It was heartening to feel the warmth as I sat in the path of the suns glow through a large picture window. Supplementing the fluorescence of the yellow of the daffodils, an elderly woman adjacent Karen compared the extreme glare to radiance exhibited by a sunbed.

Thankfully no one in the waiting room took her metaphor too literally by donning protective goggles and taking off their clothes…… Especially the old lady!

With the effulgent sun, the sight of political propaganda from daffodil clusters and the industry displayed by nest building avians, there could be no doubt we were into spring at last……… That and a sign pinned to the centres notice board advertising ‘Spring time bullet-proof vest sale – Saturday 9th April.’ ……. Remember what I told you earlier about telling porkies! 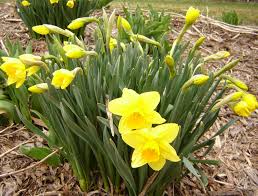 Spring sees the rebirth of perennial plants, leaves on deciduous trees, the servicing of the lawnmower (not by Richard Nixon the mechanic though, the lying get) and most importantly walk to the pub without getting p!ss wet through.

Talking of seasons, before she ventured into the treatment room Karen’s informed me that the clocks go back this weekend…… Either we’ve just experienced the quickest British Summer Time ever, or our grandfather clock collection is being repossessed again for missed HP payments.

Karen’s appointment lasted about 15 minutes. On the subsequent walk towards the exit, my beloved caught sight of the advertisement for tomorrow’s bullet-proof vest sale.

“Fancy coming down here tomorrow for that sale?” she questioned.

“Why the hell would we need a bullet-proof vest?” I questioned.

“Well I don’t. But if you don’t stop winding me up, I wouldn’t rule out your requirement for one!” she informed me. Leading to an uneasy smile and me making a note to revisit my security.

As we got to the door, the receptionist bode us farewell, prior to shouted over to Karen and me “Don’t forget, vote Mitt Romney for President!”

“He’s not running. Even if he was we can’t vote in the US elections!” I responded patronisingly.

“No not that Mitt Romney. I mean the grocer from down the road whose running for the presidency of the Ainsley Scragg Domino Club!” she explained.

Karen and I refrained from a verbal response, smiled back disingenuously at the receptionist before exiting towards the sun-drenched car park.

As we got to the car, as we opened the vehicle doors I confided in my wee spouse “There’s no way I’m voting for him. He’s another one who overcharged me last week. The thieving get!” 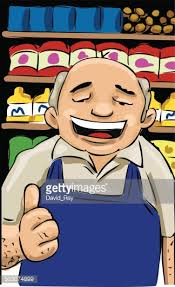 Mitt Romney the grocer  (above) – Don’t let that smile fool you into voting for him!