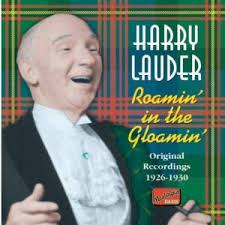 Referred to by Sir Winston Churchill as “Scotland’s greatest ever ambassador”, entertainer Sir Harry Lauder passed away on this day in 1950.

Born in Portobello, Edinburgh in 1870 he was the first Scottish entertainer to sell a million records and at his peak was the highest paid entertainer in the world.

He started singing in public at school in Arbroath, and raised his profile further by entering a number of competitions in Hamilton. His first professional engagement as an entertainer was at Larkhall in 1894, prior to joined a concert party which toured Scotland..

In 1907, Lauder undertook the first of his 22 tours to the USA, where his comedy and singing act was held in reverence. His vaudeville theatre act also proved popular in Canada, Australia, New Zealand and South Africa.

A robust patriot, Harry raised huge sums of money for war charities during the Great War (1914-1918) and entertained troops in the trenches in France, where he came under enemy fire.

During World War II (1939-1945), he again entertained troops and broadcast over the wireless with the BBC Scottish Symphony Orchestra, despite his advanced years. 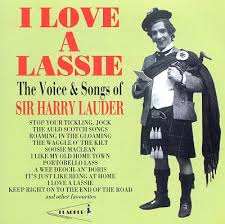 He was knighted in January 1919 by King George V for his services to entertainment and charitable work. Rumours that he received it for being the first Scotsman to reach 45 years of age were found to be mischief making and untrue!

Sir Harry wrote most of his own songs, apart from the ones he didn’t write, which were written by other people.

His more well known and best loved Caledonian ballads being Roamin in the Gloamin’, I Love a Lassie, A Wee Deoch-an-Doris, and Keep Right on to the End of the Road. He also starred in three British films: Huntingtower (1928), Auld Lang Syne (1929) and The End of the Road (1936).

I first became aware of Harry Lauder through an uncle in the early 1980’s. If he was in the north east of England (my mum’s brother not Sir Harry), he would turn up at our house after a night drinking with 8 lots of fish and chips (for just 5 of us).

While we did our level best to polish off the food a 11 pm, he would sing Harry Lauder songs with a whisky in hand. His particular favourite was ‘Roamin in the Gloamin’

He wasn’t Scottish but he would mimic Sir Harry’s dialect as he sang with gusto…… To clarify gusto wasn’t a family member he sang duet with; I meant he sung with enthusiasm.

Occasionally, he’d go over the road and grab Jimmy, our Scottish neighbour to form a duet. Our Kirkcaldy born family friend had no issue at being collared at that ungodly hour, especially when a whisky and a Sir Harry Lauder song was on offer! ……. Although, I’m not sure what his wife Moira thought of being woken at that time!

When it got to 2 am and his taxi had been waiting outside for 2 hours, my uncle finally left. He was topped up with whisky and even the fact his taxi would have cost him the same as Greece’s national debt failed to dent his high spirits.

“Do you need any more fish and chips, kid?!” he would ask everyone before he left. Luckily no one did, as there wouldn’t have been anywhere open at that time to buy them!

On one occasion, as my uncle climbed in the taxi, he asked Jimmy if he wanted the taxi to drop him off. Our neighbour politely declined as his home was only 20 yards away from where the taxi was parked! My uncle was like that, though, a man of great humanity, kindness and a mischievous piss taker! 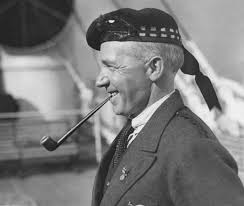 Sir Harry Lauder died of pneumonia in 1950 and was buried in Hamilton in a ceremony covered by Pathe News and his memory remains undimmed today.

When a new bypass of his town of birth, Portobello, was built in the 1980s it was named “Sir Harry Lauder Road”. I’m assuming that was after him and not a huge coincidence!

I don’t know if my uncle’s taxi driver ever drove him along ‘Sir Harry Lauder Road’, but I do know he’s the only cabbie on the Sunday Times Rich List!