Born in Hull in the East Riding of Yorkshire, the knight of the realm’s critically acclaimed first appearance on that day won him the following rave reviews:-.

“Who the bloody hell invited the theatre critics from the Reighton Gap Courier and the Flamborough Clarion to watch the birth of my baby?!!” – Tom Courtenay’s mum.

“Can you tell me the way to Ward 17 please?” – Lost man in the maternity wing.

After a spell at Kingston High School he went on to study drama at the Royal Academy of Dramatic Art, in London. His big career break coming in 1961 when he took the starring role on stage in Billy Liar, based on a novel by Keith Waterhouse. 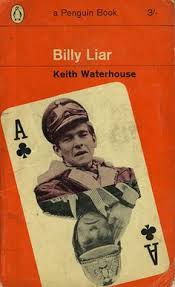 Coincidentally, a couple of days ago I watched director John Schlesinger’s 1963 film Billy Liar, in which Tom Courtenay reprised the eponymous role of Billy Fisher (aka Billy Liar), which he’d earlier portrayed on stage.

When I say coincidentally, it’s admittedly not much of one. It pales into insignificance with the coincidence of the twins in Woody Allen’s book ‘Without Feathers’, who lived 30 miles apart and when one bathed the other also got clean. …… However, I thought the word added to the narrative, so I decided to leave it in.

Young Fisher was a Walter Mitty type character with two fiancées, even though his true love was a third girl; the free spirited Liz (played by the beautiful Julie Christie).

He struggles to sustain a relationship with his two fiancées; the orange gorging virgin Barbara and hard faced café worker Rita who, unbeknown to them, share the same engagement ring. He manages to maintain the deception with incessant lying. However, the ruse is soon shot down in flames when they both attend the same dance as the feckless chancer.

To add to his unfulfilling lifestyle Billy works in a dead end job in a undertakers office (excuse the pun), not to mention having delusions that he is the leader of a fictional country called Ambrosia.

To compound things further he has been caught by the boss embezzling the stamp money for the hundreds of work calendars he didn’t send to customers the previous Christmas.

Billy’s dream is to leave behind his northern mill town and go to London to write gags for the dreadful comic Danny Boon, a second rate comedian with the catchphrase “It’s all happening”

Boon is certainly in need of new material, as his act comprises of a rubbish catchphrase accompanied by woeful put downs of the old ladies in the aged audience.

While opening a newly renovated Bradford supermarket, the elderly groupies hang on Boon’s every word. Despite his inane put downs they laugh heartily at the “funny” man with the disingenuous smile, inept catchphrase and freshly baked jumper.

Does Billy fulfil his dream of improving Boon’s material? Does he get to leave for London with the free spirited Liz? Are the streets of London really paved with gold? Why is my chair on fire? …… Aaarrrggghhh!!

I’m not going to spoil the end of this movie, other than to say that police chief Brody and Richard Dreyfus’ character survive, but the shark and Quint perish.

I don’t know about Danny Boon, but for Sir Tom Courtenay it was ‘all happening’ throughout his glittering career on stage and screen. Accolades include an Academy Award nomination for Best Actor (for The Dresser in 1982) and receiving a knighthood in 2001.

Happy birthday Sir Tom! You might have been a right lying sod in it but, thanks to your portrayal, Billy Liar holds a lofty place in my favourite movies list. 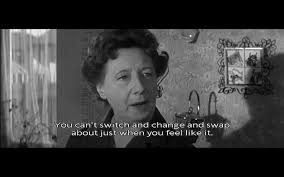