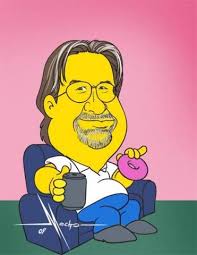 “Marge, don’t discourage the boy. Weaseling out of things is important to learn. It’s what separates us from the animals…… Except the weasels.”

The sage like words of Homer J Simpson, penned by Matt Groening and his team of writers for an episode of the inimitable comedy The Simpsons.

Why have I just quoted one of the many humourous comments attributed to the salad dodging head of the Simpson family? Is today’s blog going to consist of me plagiarising my favourite quotes from Groening’s globally popular animation?

The answer to that is unequivocal ‘No’. I merely brought it up as I wanted to pay tribute to the creator of one of my favourite shows on his 62nd birthday.

Why did I choose Matt Groening to eulogise about? Why didn’t I write about Japanese entertainer Tatekawa Shinosuke who is also 62nd birthday today?

Well, to be honest I know very little about Tatekawa (is it ok if I call you Tatekawa?!)…… No, not you! ……. You’re not called Tatekawa!

I wrote that on the off chance he does ever read this. I want to check he is comfortable with me being so familiar.

By the way, if you ever get the asked in a pub quiz how to write Tatekawa Shinosuke’s name in Japanese the answer is 立川 志の輔.

It’s unlikely that it’ll crop up, but make a note of that on your smart phone just in case. Unless you haven’t got a Japanese keyboard on it, then you’ll have to memorise it or write it down somewhere…… Anyway, back to Matt Groening.

Born in Portland, Oregan on this day in 1954, Groening was the middle of five children of Homer and Margaret Groening!

His immediate family heavily influenced his naming of characters in The Simpsons. As well as his real parents being Homer and Marge, two of his sisters were called Lisa and Maggie.

Another sister was called Patty, which was bequeathed to one of Marge Simpson’s sisters. Additionally, the maiden name of his mum (Wiggum) was given to the police chief in the show.

Despite the heavy use of his own family names, Groening is quoted as saying that growing up in his childhood home bore no resemblance to Springfield’s dysfunctional family.

His other animated hit Futurama mirrored his childhood more closely than The Simpson’s After he was cryogenically frozen for one thousand years at the age of 11.

Like the pizza boy in the show, Groening was defrosted in the 31st century. However, he quickly transported back to current times after getting a $1.3 billion fine when he tried to return his library book! Not to mention disliking the thought of being 1011 years old!

The unfortunate Groening was cryogenically frozen just as he asked his teacher if he could go to the toilet!

He first became interested in animation when he saw Disney’s One Hundred & One Dalmations. Animating wasn’t his only inspiration from the movie. It also influenced him to aspire to be like villain Cruella De Ville.

Although Groening’s parents were happy with the choice of animation as a positive lifestyle influence, parental pressure discouraged him from a life of dognapping.

Despite citing Disney as an influence, Groening’s animation style and script content in The Simpsons targeted at a different demographic audience.

After hitting the screens in 1989 his brain child became a worldwide phenomenon with, at times, its ‘near the knuckle’ content appealing to adults as much as kids.

Following the huge success of The Simpsons, other animation studios adopted a more diluted version of its script format; with I guess the driver being to widen its audience demographic to include an older audience.

Anyway, Happy Birthday Matt Groening! …… Thanks for the many laughs! …… Oh, I nearly forgot, can I borrow your Breaking Bad box set please?! 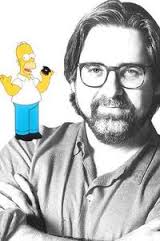