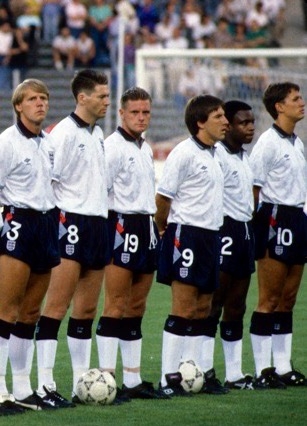 It was a warm Bedfordshire night on 4th July 1990. My first born child had just turned a month old and was being fed upstairs by my diminutive Mrs. I wasn’t convinced pizza was suitable for a one month old, but he’s got to the age of 25, so I’ll begrudgingly give kudos to my wife’s parenting skills……. That’s a joke by the way so don’t try that at home!

I recall at the time sitting with a stubby (25cl) bottle of Tescos branded French lager in my living room…… There was other stuff in the room as well, including pizza, chairs and ornaments but that’s all the scene setting I’m doing!

It was early evening and, perched in an armchair, I apprehensively  awaited the, soon to start, football World Cup semi-final match between England and West Germany.

As I sat in our two bedroom semi on the Luton/Dunstable borders, I prayed that for just once England would get one over on our teutonic cousins…… By the way my apprehension wasn’t the result of pre-match nerves, moreover the fact I lived in Luton!

I also prayed for a time when I could afford nicer beer than Tescos own brand, as well as a day when I didn’t have to play my Carpenters greatest hits cd in private solitude.

Looking over at the TV, I witnessed the two teams standing awaiting the pre-match international formalities. Rituals such as the national anthems and Terry Butcher wrapping his head in bandages.

The picture of the England team above was taken at the exact moment in time I’m referencing in this narrative.

It was the biggest game in English football since the World Cup triumph in 1966 and I had a front row seat. Admittedly, it was only in my living room with my Tescos beer, pizza, chairs, ornaments and hidden Carpenters cd, but the wife’s chanting of “The referees a b*****d!” upstairs helped provide a stadium atmosphere……. I think “Head, Shoulders, Knees and Toes” is a more suitable song for a baby, but that tale is for another time.

When I see teams lined up prior to international sports matches, I occasionally like to imagine what (if anything) is being said amongst the players at this time. A moment when flowing adrenaline, nerves, and, in the case of Darren Anderton, a note from your mother saying you can’t play without a vest if it drops below 15 C, come into play.

On this occasion during that Turin evening on 4th July 1990, I’d like to think the chatter amongst the England players at the time went something like this:-

Paul ‘Gazza’ Gascoigne (No 19), who has a short attention span and is bored, whispers to his fellow Geordie Chris Waddle, as the national anthems commence:-

Gazza (louder than he should be) – “Why is none of wor players singing along to the anthem, Chris?”

Waddle (whispering back) – “Cos it’s the West German anthem! …… Shush Gazza, show some respect, will ye!”

Gazza (Still loud) – “The kroots have got quite a canny anthem mind. It’s very sturring!”

(I just want to make clear at this point I can spell. My misspelling on Gascoigne’s dialogue is my attempt to write it in his north east accent.)

Gazza – “Is it not?! Nee wonder Bobby Robson bollocked us for singing the wrong wurds before the Belgian match then!”

Gazza – “Beardsley’s being a bit quiet mind! Although, he’s not the sharpest tool in the box, unlike us two…… F*** knows who cuts his hair. It’s the wurst footballers cut I’ve seen since that Leeds keeper David Harvey in the 1970’s”

Waddle again keeps his counsel, despite having an unerring urge to yell “Shut the f*** up, Gazza!”

Gazza (whose on a roll now) – “Do ye kna’ who am talking aboot, Chris? …… It’s the gadgey with the Lego on his heed. Him who looked like an extra in Planet of the Apes!”

There is a few seconds silence for England’s No 19 to regain his breathe, before:-

Gazza – “He was a canny keeper like. Much better than the other goalie Leeds had back then! …. Gary Strake, or Sprake or summink! ……. That daft bastard used to thra’ it in his own net! …… How he was a Welsh international I’ll never kna’!”

At that point, the West German anthem finishes, however, it doesn’t stop Gascoigne continuing his critique of 1970’s Leeds United goalkeepers.

Gazza – “Leeds had another Welsh gadgey as a keeper in them days, as well. He was called summink like Glan Letheran, although I divvant think he played much. Fancy being called Glan! Them Taffs have some shite names don’t they?!”

A nervous Waddle, knowing the biggest football game in his career is about to start, has now switched of from listening to his friend and team mate. He is highly conscious that, if he doesn’t blank Gazza out, he will be end up screaming “Stop f***ing yapping!” to his fellow northerner halfway through ‘God Save The Queen’.

Gazza (unperturbed by Waddle’s lack of response) – “By the way, have you noticed I’m wearing number 19, Chris? …… Coincidentally, me Aunt Maureen used to live in a hoose in Bensham that was number 19….. It’s a f***ing small world isn’t it?!”

At this point the band strikes up the familiar tune of “God Save The Queen”. Waddle, who just wants the anthems to finish to escape from the relentless chatter of his young team mate, starts singing heartily along with his colleagues.

Meanwhile, Gascoigne intertwines singing “God Save Gary Sprake” with whispering to Waddle that he had an uncle in Heckmondwike who once fixed ex-Leeds captain Billy Bremner’s gas boiler.

However, it falls on deaf ears as the lanky winger remains focused on the job ahead!

The anthem finishes and the England players applaud, before dispersing ready for kick off.

As Waddle stands on the half way line psyching himself up against our footballing nemesis, Gazza walks up to him and hands him a business card. He then tells his bemused team mate “By the way Chris. that’s the number of my uncle from Heckmondwike who fixed Billy Bremner’s boiler if you ever need him!” 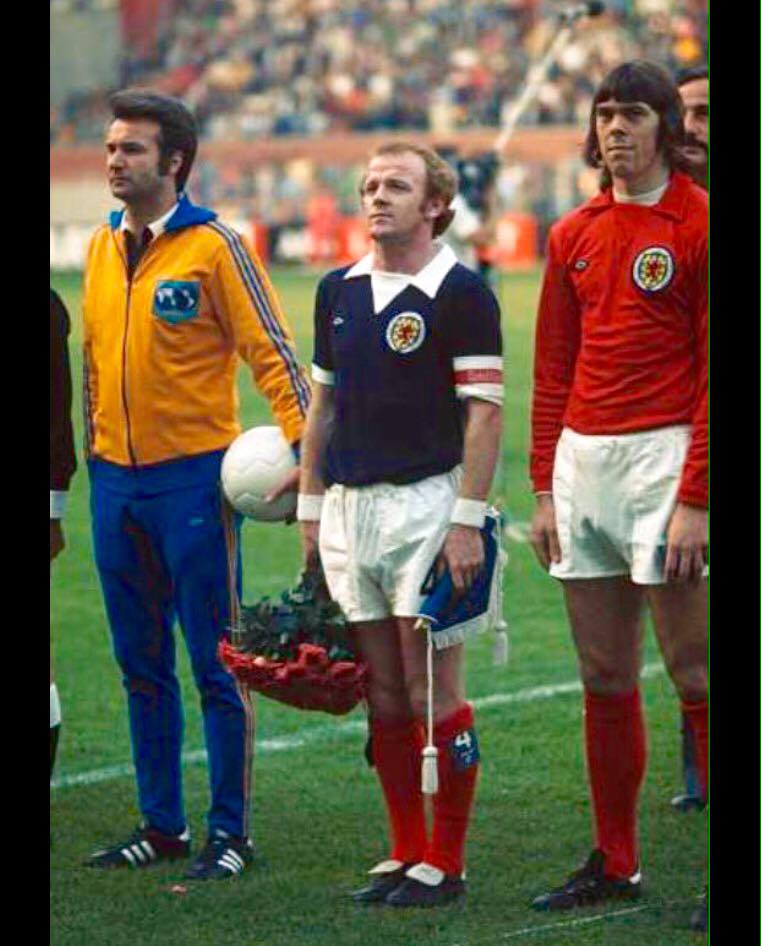 As with my fictional chatter above, I’d like to think around the time that photo was taken, the following conversation took place between the two Scots in hushed tones:-

Harvey (In red shirt) – “Billy, I’d hurry up and get those flowers in some water, if I were you. They’re starting to wilt.”

Bremner – “Never mind what I’m gonna do with the flowers, Dave!….. When you gonna get a decent bloody hair cut pal?!”

Harvey (Not rising to Bremner’s baiting) – “Talking of hair, Bill, I wonder when that bloke next to you in yellow is gonna give Paul Reaney his hair back?!”

Harvey – “Did you know Kojak’s sidekick in the show is Telly Savalas’ brother in real life, Bill?”

Harvey – “No, the tubby guy with black curly hair……. By the way Billy, have you had your gas boiler fixed yet?!”

Bremner – Yes, a guy from Heckmondwike fixed it the other week. He made a bloody good job of it as well.”

Bremner – “I tell you what, though, he had a little nephew tagging along who never f***ing shut up all the time he was there. He was telling me how he was going to be a footballer and all about his auntie Maureen who lived in Bensham!”

As the anthems conclude, Harvey laughs at his club and country captain’s anecdote about the nephew of the guy who fixed his gas appliance.

As the players disperse, Harvey heads towards the goal he will defend with his life. Even if it does spoil his resplendent ‘chewed by a goat’ hairstyle.

As he approaches the penalty area he feels a tap on his shoulder. It’s Billy Bremner, who hands him a business card and tells his stunned team mate “By the way David, that’s the number of the guy from Heckmondwike who fixed my boiler if you ever need him!”