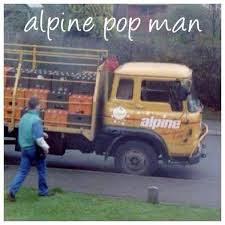 Brotherhood can mean different things to different individuals. It can be the bond between siblings, fellowship of kindred spirits or a fraternal/trade organisation, to name a few.

I wanted to talk about brotherhood of the sibling bond kind in this blog.

Helen inherited mum’s selflessness, resilience, strength and warmth. Like mum she hasn’t got a bad bone in her body. Her life presents her with great challenges, many of which would break some people. However, she greets them with stoicism, dignity and incredible spirit.

Not that she’ll be that bothered, but I don’t mention her as much as Ian in blogs. Probably, as the family childhood stuff I write about was before she was born, or as a babe in arms.

It goes without saying, though,  I love her equally as much as Ian and am very proud to be her brother. That being said, she better not get to mum and dad’s china tea set before me when we put them in a home next month!

Anyway, back to brotherhood.

Has there ever been two brothers whose thought provoking back catalogue of work has given so much entertainment, education, wonderment, tension and admiration?

No, not Jedwood or Ian and me, I’m referring to Sir David Attenborough and his late brother Lord (Richard) Attenborough!

Their legacy in the spheres of cinema, TV, science and charitable causes ensures a place of legend within their respective fields  (that’s the Attenborough brother’s still!).

I first recall watching Sir David Attenborough at my parents modest semi-detached home on Low Fell, Gateshead in the 1970’s. I can remember it as if it were yesterday……. Well 40 years ago anyway, if truth be told.

On that day in the mid 1970’s, when mum asked my brother and I “Do you want to watch David Attenborough’s nature programme on the telly?”, initially, there was a moment of silence. Followed by an exchange of glances between my brother and I, before shrugging our shoulders and responded unenthusiastically “I suppose so!”

Little did we know it would be a moment of spiritual and educational awakening at the glories of the natural world.

As we went to sit down on the settee our Ian whispered to me “Who the heck is David Attenborough, Gary?!” I shrugged again, before responding “I’ve no idea…… I thought you knew when you said yes to mum.”

“Is he that bloke who brings the bottles of Alpine pop on a Friday afternoon?” my younger brother asked.

“Why the heck would our pop man be presenting a nature programme on the telly?!” I quizzed my sibling, blonde of hair that according to mum needed a “Bleeding good cut!”

“He looks like him” our Ian countered on his inaugural sight of the chap in monochrome on our family TV.

“Well it’s not him…….. Our pop man would cack himself if confronted by a lion!” I advised with the knowing authority of an elder brother.

“How do you know Gaz? Have you ever asked him if he’s scared of lions?” Ian continued.

“Why would I?…….. I don’t randomly ask tradesman if they fear a lion attack! …… Anyway, it’s flipping unlikely to happen in Gateshead.” I retorted, as the surreal discussion proceeded apace.

“Bernie the butcher is scared of lions” our kid advised me knowingly. “I asked him only last week.”

“I would imagine anyone confronted with that question would say they are scared of lions! But the chances of coming face to face with them in the north east of England are pretty remote.” I countered with growing irritation.

At that point, the random discussion of a 10 year old boy and his 8 year old brother ended. Instead, they settled down with a glass of Alpine lemonade, watching in awe at the elephants and lions on the family’s 21 inch black and white television screen.

These groundbreaking wildlife pictures (at the time) were accompanied by the erudite commentary of a consummate broadcaster with a wealth of knowledge in his field (that’s still not one of the Jedwood boys!).

It had been a rare chance for two northern youngsters to see wildlife. The only other time we got to see animals was on Johnny Morris’ show Animal Magic. This was a documentary type programme set in a zoo where the animals gave you a running commentary into their lives in captivity.

To be clear, they weren’t really talking, it was Johnny Morris dubbing over animal mouth movement………. Bizarrely, when Johnny Morris was on camera his voice was dubbed by Frank the giraffe.

The next afternoon the doorbell rang. With the inquisitiveness of youth, Ian and me followed mum to the door. She opened it to reveal the David Attenborough doppelganger who stood bold as brass in an Alpine company uniform, a bottle of pop in each hand. 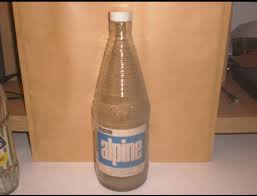 “Here you are Margaret! One bottle of Alpine lemonade and one of Dandelion & Burdock, as usual.” the Alpine man told our mum.

She paid him, wished him well and advised that we’d see him next week.

“No you won’t!” came the voice of the man in the Alpine uniform.

“Why, are you on holiday?!” mater enquired.

“No, they’ve just opened that lion park along the road at Lambton and I’m absolutely shit scared of lions……… I’m moving to Cleckheaton in West Yorkshire!” 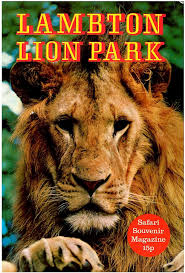