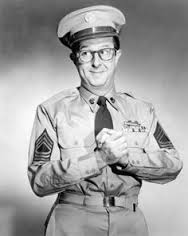 Recently it was the 30th anniversary of the death of American comedian Phil Silvers. The man who famously portrayed Sgt Bilko, in the iconic Phil Silvers Show in the late 1950’s, passed away following a heart attack at the age of 74.

Silvers was born on the exact same day as my paternal grandmother in May 1911. He achieved far more fame than my grandma, but she wasn’t bothered as she has the kudos of being born and raised in Yorkshire, unlike Silvers!

I’ve written before about my love of Saturday night TV in the 1970’s, which on occasion was wrapped up late at night by The Phil Silvers Show. I first got to watch it at the middle of that decade, around the time I started going through puberty.

To clarify, the reason I was allowed to stay up wasn’t owing to going through puberty. It was because I was now deemed, at around the age of 12-13, to be old enough to stay up later on a Saturday night.

Although coinciding time wise, the puberty reference is totally irrelevant to be perfectly honest! It’s only link to Sgt Bilko is that, as a pubescent boy, you knew you were on safe ground hormone wise watching a sitcom set in an army barracks…….. Or it may have just been the suppression qualities of the bromide my mum had started putting in tea! 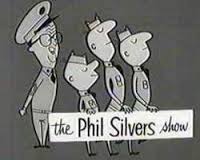 Silvers style of comedy earned him the title of The King of Chutzpah. He was dubbed this due to his audacious TV and stage performances, not the fact he was the sovereign head of little known nation named Chutzpah, by the way! Chutzpah is a Yiddish word that means cheeky comic character in a fictional army camp portrayed by a bald man with glasses. …………Or so I’m told!

Like fellow Jew Groucho Marx, who was easily identifiable with his trademark specs and grease paint tash, Silvers became instantly recognizable by his specs, bald pate and the ‘I’m Phil Silvers’ t-shirt he wore.

He donned his ‘I’m Phil Silvers’ t-shirt most days, except on the Sabbath when, for some strange reason, he wore an “I’m Jack Benny’ t-shirt. On those days Jack Benny wore a ‘Where the hell is my I’m Jack Benny t-shirt’!

I have fond memories of watching Sgt Bilko as a kid, as well as in adulthood. Phil Silvers made me laugh heartily and became my 3rd favourite bald bloke, after my dad and brother. He used to be 4th favourite behind ex British swimmer Duncan Goodhew,, but he went down in my estimations after he turned down my Facebook friend request.

The Phil Silvers Show was filmed live in front of an audience. As the shows creator Nat Hiken and his writers scripts were genuinely funny, in addition to Phil Silvers brilliant delivery,  the canned laughter used in lesser sitcoms wasn’t required.

Anecdotally, filming in front of a live crowd was nearly ceased after a gullible member of the audience was conned into buying an army jeep by Bilko and his platoon. However, I’m not certain about that as there is no recorded citation for this story. It was apparently sold by Doberman to pay for a liposuction operation. There is no citation for that story either, as was sold by Pepporelli for ……… yadder, yadder!

The Phil Silvers Show ran from 1955-1959, during which time 142 shows were recorded. Despite only running for those four years, 60 years ago, it is still humorous and much loved by many via cable channels and DVD’s.

After it’s conclusion in 1959, the Bilko persona was borrowed by the Hanna-Barbera animation studios for their TV cartoon Top Cat. The character Benny the Ball was even voiced by Maurice Gosfield, who played Private Duane Doberman in The Phil Silvers Show.

We had a neighbour called Jimmy in Gateshead who had the same look, build and laugh as Private Doberman. He was a Scottish guy with a similar nature to the woebegone soldier who was often on the receiving end of his sergeants mischievous scheming. 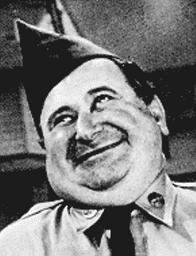 Jimmy was far brighter than Doberman mind you, apart from on the day my dad sold him back his own budgie!

Right, I’m going up to Sainsburys, the food shopping doesn’t do itself! 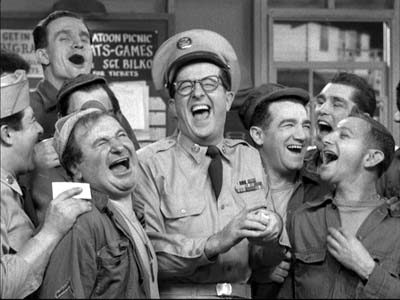