After a serene Saturday afternoon train ride north from Leeds, I spent the evening with a group of mates in a haunt of my youth, The Gold Medal pub on Low Fell, Gateshead.

This the Inn that witnessed the acquisition of my inaugural restraining order (that’s fictional incidentally); also an establishment where a mate was blacklisted for pool hustling in 1982…… When you bear in mind the pub didn’t possess a pool table, it was a remarkable achievement by my buddy from South Shields.

An amenable tavern halfway down the steep Team valley, the Gold Medal sits adjacent to the Chowdene estate, where I was raised after the family relocated from Leeds in my fledgling years. 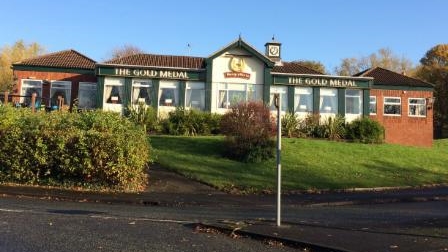 Built in the mid-1970’s, it became the second public house on the estate, joining The Jolly Miller in refreshing the Low Fell populace with it’s Tyneside/Wearside ales, Babycham and that new fangled wine the southern chattering classes were drinking.

The Gold Medal, or The Medal as locals dubbed it by cleverly dropping the world Gold, acquired it’s name as a tribute to the Gateshead-born British Olympic runner Brendan Foster. An athlete whose 1970’s sporting achievements included a 10,000 metres Olympic bronze medal (Montreal 1976), along with gold’s in European championships (5,000m) and the Commonwealth Games (10,000m).

If memory serves me correct, Foster, whose name is coincidentally an anagram of ‘Ran so fast’ (well, nearly), lived on the Chowdene Estate at some point; although I may have imagined that.

I do, though, retain unreliably vague recollections from my childhood of witnessing Brendan racing along Durham Road on Low Fell while training for the 1976 Olympics (Bren not me).

As I allude to, though, they’re very clouded memories. I maybe mistaken with my identification when claiming I spotted the Olympian haring along the Fell on that mid-70’s spring day. I certainly wouldn’t repeat the claim under oath in a court of law.

The fleet footed individual I witnessed that day may possibly have been a guy ‘legging it’ after burgling Cranston’s the jewellers at the top of Earls Drive. Or maybe one of Thow’s barbers racing away from an irate customer after a inadvertently removing one of his beloved mutton chop sideburns.

I’m pretty sure we can eliminate that the mystery runner was Bren hot footing it after burgling Cranston’s the jewellers. The affable Hebburn-born middle-distance athlete would never have lowered himself to such low-brow shenanigans…… Would he?!

Anyway, I can say with a degree of certainty The Gold Medal acquired it’s name as a tribute to Brendan Foster CBE…… If the drinking establishment had have been bequeathed the moniker ‘The Butchered Mutton Chop’ or ‘Cranston’s Pilfered Necklace’, I’d be less sure.

During my late teens and early 20’s, I spent many a happy hour in The Gold Medal. To clarify, when writing happy hour I’m referring to pleasant evenings under the tavern’s roof. Not, I was such a tight wad, my frugality led to only drinking in the establishment at ‘Happy Hour’ to save cash.

Not only did I live fairly close to The Medal, but I worked at the National Coal Board area HQ located only a few hundred yards walk from the ‘watering hole’. Consequently, it also had the dubious accolade of being my work local.

That being said, looking south west toward Lamesley and Kibblesworth from The Medal’s bar, the view is predominantly as I remember it. An easy on the eye horizon exhibiting shallow pale green grass fells, interspersed by the deeper emerald flora bestowed by field hedging and non-deciduous trees.

A sight I witnessed for two decades from the front windows of my childhood home. The residence perched amongst streets of 1960’s built houses on the Chowdene estate – Residences located slightly higher up the steep Team valley incline than The Gold Medal.

A cordial evening down memory lane (although it was called Chowdene Bank when I lived in the north east) ended controversially. A consequence of a fleet of foot grey haired man wearing a number 317 running vest snatching my brother’s watch outside the pub. Prior to scarpering south towards the Allerdene estate, accompanied by commentary from the ghost of David Coleman.

One of the races (below) that inspired the name of my Saturday evening drinking location.