As a fledgling cricketer learning the game at Gateshead Fell cricket club (GFCC), it soon became apparent that certain knowledge voids about the game had to be filled sooner rather than later.

Possibly the most key being awareness that two spherical objects who’d taken recent residence in my M&S undies needed protecting from the hard cork ball. A pair of body parts that had thus far reticent to make an appearance, but became more outgoing around the time my voice dropped an octave.

By protection, I’m not alluding to having them guarded by Low Fell mafioso as part of an unorthodox extortion strategy. I’m referring to the fact I needed a cricket box to protect my no longer agoraphobic bosker browns. 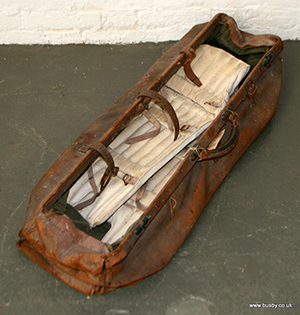 As a naïve kid, when I was told of this necessity of purchasing a box by a club coach (who coincidentally worked for the Cricket Box Marketing Board) I wasn’t sure what piece of equipment he was alluding to.

The overt nature of protective pads, gloves and bat made the need to acquire such items obvious. A cricket box, though, is covertly worn as protection. As such, in my youthful innocence, I wasn’t aware of what this essential piece of kit looked like. Being called a box, I had visions of it being a smaller version of the cardboard containers in which I stored my Subbuteo table football figures.

There was dressing room talk that one of the lads had made his own box. An unlikely protector created from a revamped cheese grater. I took this tale with a pinch of salt, though, especially after it was mooted the flakes of skin removed by the cheese grater were later sold on to a local Italian restaurant for use as parmesan cheese…… Although high unlikely to be true, I didn’t dine again at that eatery after hearing the tale.

To ascertain if my Subbuteo box theory held water, I tested it out in my bedroom the following day. It soon became clear that type of box wouldn’t be fit for purpose. For one thing, it was incredibly uncomfortable to wear….. Although, if I’d have removed the Subbuteo players first the comfort levels might have been higher.

Thinking about this further at the time, it dawned on me the cardboard Subbuteo box wouldn’t provide adequate testicle protection from cork and leather cricket ball. 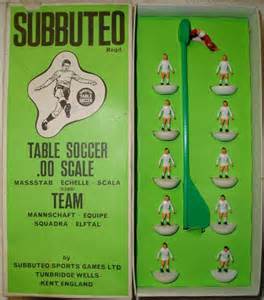 None the wiser as to the aesthetics of a gonad guard, I placed the box of plastic footballers back into my wardrobe adjacent to the other table top teams. Thinking it’d be more prudent to ask my dad than further attempting to solve the mystery myself,  I wandered downstairs to the living room of our 1960’s semi-detached house.

Here, my dad was sitting in an armchair reading that night’s Evening Chronicle newspaper. My mum was in the kitchen washing up, while singing an old music hall song (most likely Old Mr Porter) to my attentive 3 year-old sister Helen.

I’m not sure where my 11 year-old kid brother Ian was at the time. With me recently being in situ in the room, I did know, though, he couldn’t have been confined to the bedroom we shared as a punishment (as was normal).

With a smidgeon of boyhood embarrassment, borne from the area the item covered, I sheepishly inquired of my pater “Dad, what does a cricket box look like, and where would I get one?”

My old man stopped reading an article on Swan Hunter ship yard job losses to look me square in the face. On making eye contact he mischievously replied “Have you tried ‘Harry’s Cricket Box Emporium’ on Kells Lane?”

Despite my naivety, I wasn’t daft enough to believe there was a whole store that specialised in cricket boxes. A wondrous emporium on Low Fell, peddling bosker brown protectors; patronised by hoards of cricketers from as far as Kielder Forest northwards to Teesside in the south.

“I’m being serious, dad!….. The cricket coach at the Fell says I need to get one.” I pleaded.

“Why don’t you just use one of the boxes where you put your Subbuteo players?” he continued mischievously.

“Look dad. I need one before my next net session tomorrow. Please be serious!”  I re-iterated frustratingly.

He didn’t initially respond to me. Instead, inexplicably shouted towards my mum in the kitchen, “Marg, have you seen my pipe?”

“You don’t smoke a pipe, Malcolm!” came back the baffled Yorkshire lasses reply.

With that he stood up and told my mum “I’m going to take our Gary to Makro and get him some cricket equipment, and buy myself a pipe as I can’t find mine!”

As dad and I closed the front door, heading towards his Ford Cortina on the drive, the distant voice of my mum could be heard through the window, yelling “You don’t smoke a bloody pipe, Mal!”