Yesterday, I ventured east on the A64 to the York Designer Outlet where I met up with my twentysomething son Jonny. An amiable young man, the fact he’s occasionally prepared to read my narratives, when his sister steadfastly refuses, contribute to making the Leeds lad my favoured offspring.

I’m not upset about my daughter Rachel’s stance, but she won’t be laughing (rather like her brother reading my monologues) when my book ‘Cheesecloth Have Feelings Too!’ goes to number one in the bestsellers list under the Cheesecloth Psychoanalysis Fiction category.

Prior to leaving Leeds for the Minster city, I mulled over the motives behind my eldest offspring’s atypical choice of meeting venue. What had driven him to choose this out of town retail oasis on the cusp of the A19. A locale boasting an abundance of big brand clothing stores, coffee houses and kitchenware shops.

Maybe he opined I could do with upgrading the contents of my wardrobe. Or possibly he felt I needed the state of the art spice rack that informs the owner “You’re running low on cinnamon.” if they were …… errr…..low on cinnamon.

An ingenuous technological development no doubt, but a software bug rendering the device unable to advise when the other spice levels were dwindling, for me reduced it’s desirability…… Especially as I rarely use cinnamon.

Potentially he chose the retail outlet as he wanted to show his pater the innovative sandwich maker he covets. A kitchen device which, amongst other insults, yells “Your cheese toastie is ready, lard arse!…. Now go wash your hands, they’re manky!”, when the food was ready to serve. 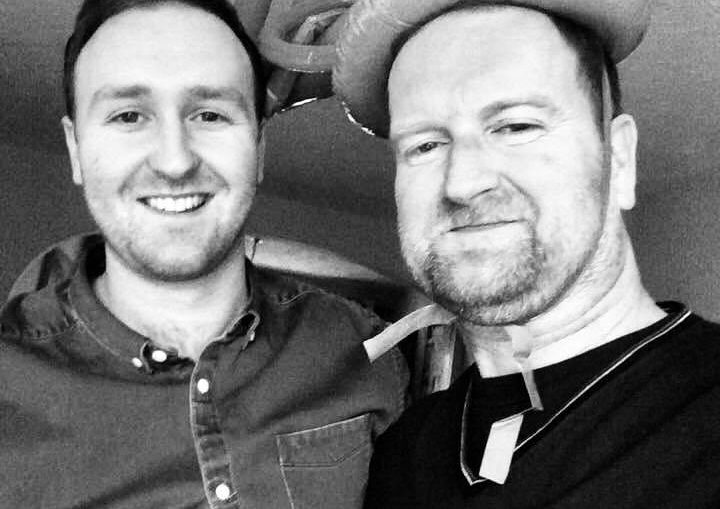 On rendezvousing at the outlet, my boy suggested we lunched first on account he was “starving.”….. I’ve got to say that, following the addition of a stone in weight over the recent festive period, he didn’t look as though he was starving. The fat get!….. An observation the sandwich maker with Tourette’s would have no doubt concurred with.

Prior to leaving home I’d consuming the remnants of a pizza I’d made for dinner the previous evening; consequently, I declined to join his invitation to eat.

When I say ‘made’ the pizza, that’s not strictly true; it was shop bought. I’m unsure what the rules are for claiming culinary credit. However I suspect taking a ready-made pizza pie from a box, putting it in a hot oven and slicing into pieces won’t be classed as making it.

Anyway, I plumped for a coffee to accompany my spectatorship of Jonny troughing a Big Mac meal. With his questionable fast food eating etiquette, I don’t envisage a Jonny Strachan Burger Eating Channel starting on cable TV anytime soon. In the unlikely event it did, during 4D broadcasts viewers may find themselves taking evasive action from burger gherkin shrapnel.

In his checked shirt my offspring looked like a zebra in a checked shirt, devouring whatever zebras eat…..I know that’s a rubbish simile, but hey give me a break I’m not getting paid for this nonsense. The only benefit I get from penning these narratives is the cathartic experience of soul searching. A strategy that enables me to escape from stressful elements of my existence.

As always, Jonny lightened my mood with his ready smile, affable nature and telling me I’m aging horrifically; along with ensuring I possessed the knowledge of my hair’s ever hastening departure.

The lad also went on to inform me of recent work developments, stating he got a lot of job satisfaction from being a fence….. This despite being creosoted once a month!

He also informed yours truly of his intention to get another tattoo, which will incorporate the Latin wording on the Strachan clan coat of arms. I was relieved it wasn’t the dreadful design of the Leeds crest unveiled last week.

Mid-afternoon, after ruling out the purchase of the cursing sandwich maker, we bode each other goodbye and embarked homeward bound.