“Wake up and smell the coffee!” is a comment we could all do with hearing every now and again. I always find being given that piece of advice useful to re-focus on the positive aspects of my life.

That being said, I’m not as appreciative of receiving those words when asleep at 7am after my wife has just broken the seal on a new coffee jar, as happened today! 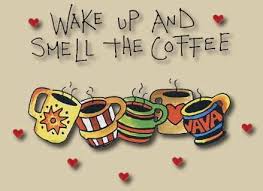 I know coffee is a proven boost to our newly woken being; I just prefer to be raised into the conscious world by drinking the aforementioned hot beverage. I’m less enamoured at my slumber being disturbed by the scent of a freshly opened coffee jar, which has been thrust under my nose like a bottle of smelling salts.

Despite its undeniably pleasing aroma, in my view being woken by anything other than actress Margot Robbie holding a bag of Pontefract Cakes is unacceptable.

Anyway, I promptly got over my spouses thoughtlessness and turned over to try re-establish my dream about Margot Robbie and Pontefract Cakes.

As I attempted to get back to the part where Ms Robbie opened the liquorice sweet bag provocatively with her teeth, Karen wandered back downstairs with the coffee jar singing an out of tune ‘There’s An Awful Lot of Coffee in Brazil”.

Coffee is big business these days. People spend hours and millions in multinational coffee franchises, where they natter with friends/associates, carry out interviews and even make business deals…… Rumour has it that Margot Robbie’s agent secured her role in ‘Pontefract Cakes 2 – The Sequel’ at Luigi’s café in the West Yorkshire town of Heckmondwike.

When I was a kid in the 1960s/70s and 80s our High Streets were bereft of these multinational coffee house franchises. If memory serves me correct there was a café in the suburb of Gateshead I lived called The Griddle, but that was about it.

I’ve no idea if The Griddle is still there as I’ve not walked along Low Fell for about 30 years. It’ll probably be a Pound Shop now, or a Pay Day lender or even perhaps the site of the north east’s first Margot Robbie Liquorice Candy Emporium.

I used to get my lunch at The Griddle when I was at secondary school. As a creature of habit I’d get a ham salad bap every day but didn’t partake in a coffee. 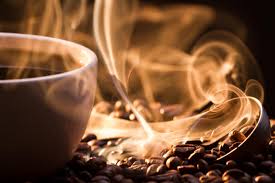 I didn’t then or even now drink much coffee, I prefer tea…… I bet you sleep better tonight knowing the rivetting information in the last two paragraphs; or at least you will until your partner nudges you to say “Wake up and smell the coffee!” at 7am.

In other fascinating news, I do occasionally have a coffee or tea at one of the multinational coffee houses that grace our West Yorkshire Metropolis. I sometimes go wild and partake in a stem ginger cookie as well.

I know it’s hardly the rebellious rock star behaviour of driving a Rolls Royce into a swimming pool, however, I’m not adverse to reckless behaviour…… For example, only last week I had an extra shot in my Americano and I used wifi from the adjacent store!……. Well you’ve gotta leave your comfort zone sometimes haven’t you!

Well, I’m off to put the kettle on and make myself a cup of Rosie Lea!