I started writing this narrative sat in the Oncology Institute at St James’ Hospital, while awaiting Karen’s oncologist appointment. It’s the first of two visits this week as she has her monthly treatment on Tuesday to supplement her daily medication.

When I commenced writing this, I was heartened to see the sun shining outside and the aesthetic beauty of the multi story car park across the plaza. Unfortunately, there was understandably little cheer inside when sat among a number of women suffering from breast cancer.

They are humbling places are oncology unit waiting rooms. They are venues that many in our self entitled and negative times would do well to have exposure to. It might place some perspective on their self-indulgent lives and misguided beliefs that they should never be inconvenienced by anyone or anything.

I admire these women immensely for their outwardly displayed pragmatism when coping with the terrible hand they’ve been dealt.

Like Karen, some of them are incurably ill, but you’d never guess their ‘ticking time bomb’ status (as my missus calls it) from their demeanour …… Not that I have witnessed anyway. They are very brave and inspiring people.

Thankfully our wait wasn’t excessive and by 09.20 Karen had seen the consultant and we were homeward bound, as Simon & Garfunkel once sang.

As I’ve said on numerous occasions, though, I can’t lavish enough praise on the staff at the Bexley unit at ‘Jimmy’s’ for the superb support and care Karen has received over the past five and a half years. 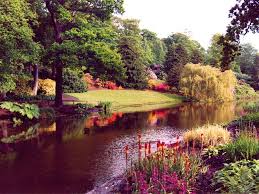 Yesterday, I took a stroll with my wife around the pond at the lower situ of Temple Newsam park in Leeds.

It’s a particularly beautiful area of the park where the water is lined with rhododendrons, azaleas, geums, crocosmia and a host of other horticultural shrubs whose plant genus I’m unsure of. In the absence of their monikers I address them as Norman, Frank and Arthur.

This area of the grounds is a verifiable cornucopia of colour in May and June when the rhododendrons and azaleas are in bloom. That being said, in mid August the majesty of the scene is still one to behold.

During a time of residing on a park bench with my wee spouse, my eye was drawn to a bright glint of sunlight reflecting off the slowly eddying pond water. The flickering of this mirroring of the sun reminded me of a ships signal lantern trying to communicate in morse code.

I tried to make sense of this message, however prolonged exposure to the glare was starting to hurt my optical sight units; making it an even more onerus task.

I never tire of visiting Temple Newsam park. With a Jacobean house as its focal point, it boast acres of open grassland, woodlands, views and vistas that were designed by Capability Brown for the 9th Viscount Irwin in the 1760’s.

Apparently, Brown’s plan was not fully followed, however his concept of a serene picturesque landscape was still achieved…… One of the plan designs dismissed as ridiculous was the idea of planting the rhododendrons upside down.

Capability Brown was a kind of 18th century TV horticulturist Alan Titchmarsh. They both can boast designing innovative landscapes whose flora and fauna bring a serenity and calm to the troubled mind.

Saying that though, to my knowledge Capability Brown never presented ‘Pebble Mill at One’; and son of West Yorkshire Titchmarsh never suggested planting rhododendrons upside down!

So what was the sun reflection trying to tell me with its flickering light communication? Well the truthful answer is I’m not sure. My morse code knowledge is a bit rusty these days and so I can’t believe my interpretation of the pond conveying a 3 for 2 yogurt offer at Sainsburys is correct.

Right, I’m going for lunch; after which I intend to walk up to Sainsburys to see if there’s anything to the 3 for 2 yogurt offer recommended by Temple Newsam pond.