It was a dark unforgiving Lancastrian afternoon. In a scene not too dissimilar to Trevor Howard and Celia Johnson’s farewell in the 1945 movie Brief Encounter, an enamoured couple stood on the platform at Manchester Piccadilly railway station. 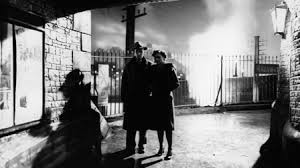 In a matter of minutes the train would leave to distant parts. Tears welled in their ever reddening eyes, as they stood huddled against the cruel Mancunian elements.

With sore eyes, his (Gary) thoughts turned from the inclemency of the weather and impending voyage to wishing the nearby onion seller would stand somewhere else.

The clock on the platform chimed loudly to welcome another hour on this 9th day of March; which surprised the platform manager as it was digital.

A born romantic, Gary not the platform manager (although for all I know he might have been as well), he tried hard to keep their relationship fresh with thoughtful little gestures.

Caring soupçons like delivering the Milk Tray chocolates dressed in all black, were not an uncommon acts in their home.

Although, it has to be said the last time he undertook the Milk Tray delivery it didn’t go to plan. Due to skipping tea, he was so peckish he ate all the chocolates en route.

Karen wasn’t too fussed, though, as they were out of date and the empty box came in handy for storing her ear wax collection. The wax a requirement to eventually open her own version of Madame Tussaud’s.

However, it’s a long process collecting the raw materials that way so don’t expect an opening anytime soon! ……. Unless your really desperate to see a wax model of George Clooney’s ear lobe.

Eventually, a final call to board the departing train came over the station tannoy. The slender figure (cough, cough!) of Gary hugged Karen tenderly and proffered a loving goodbye to his spouse. 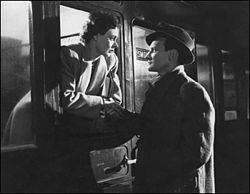 She looked intently into his loving eyes of red, prior to dismissively responded “What the chuffing hell you talking about? You’re on this train as well you silly sod! …… Now get a flaming move on or we’ll miss this train back to Leeds!”

With this, Karen and Gary boarded their carriage for the return train journey from Manchester to Leeds.

Ok then, it was nothing like Brief Encounters station scene, but I’d like to see Trevor Howard maintaining the romance when his eyes are streaming through over exposure to an nearby onion seller.Once inside the carriage Karen complained of how numb she felt from the hyperborean meteorological conditions she’d just braved…… Why she can’t just say “My feet our frozen cause it’s flipping freezing out!” like everyone else I’ll never know.

To try rectify the numbness of her feet she tried rubbing them vigourously. To her alarm she couldn’t feel a thing in her toes despite this therapy. Although, the fact she’d took my shoes and socks off in error and was rubbing my feet probably didn’t help.

Actually when I think about it, I couldn’t feel anything either when she rubbed my feet. So it was either the bloke sat opposites feet, or I need to get the circulation to my extremities checked out!

Apart from initially feeling the cold Karen was in good spirits after attending an Adele concert the previous evening at the Manchester Arena (other entertainment venues are available!).

For the majority of the journey home, my wee Mrs sat happily next to me playing Solitaire on her phone. As we passed Huddersfield, she was elated to beat her record time for concluding the game.

After achieving this, she jumped from her seat in elation and somewhat confrontationally proclaimed “See, I’m not thick, Gary! You contemptible four-eyed mysogonist!”

She then added “One day I’ll prove to you I can be transported back to a time to when dinosaurs roamed the earth!”

I’m not sure where this outburst came from as I didn’t accuse her of being thick. Neither had I proffered she wasn’t capable of going back in time to when dinosaurs roamed the earth……..Although the latter is true.

I also took umbrage at being labelled a contemptible four-eyed misogynist. After all I wasn’t wearing glasses and I’m not a misogynist at all.

It was misleading to announce to our carriage I’ve a mistrust of women; unless you count those who believe they can be transported back to a time to when dinosaurs roamed the earth.

Not wishing to become embroiled in the absurdity of the merits of time travel and me distrusting women, I returned my gaze to my iPad.

My mission was to pen a narrative of such ludicrousness anyone who read it would say “Well, that was absolutely f***ing ludicrous! …… Especially the bits about being transported back to a time to when dinosaurs roamed the earth!”

As much as I respect other people’s right to enjoy it, science fiction holds no interest to me. Science in general bored me at school. Apart from the time someone brought a frog in to try get the teacher to clone it.

Our accommodating biology teacher tried the experiment without success. It was hardly a surprise, though, as his methodology was deeply flawed.

I wasn’t much good at science, but even I knew trying to clone something by putting it in a microwave for two minutes and saying the magic words “Abracadabra!” was foolhardy.

When the frog eventually exploded it blew the door off the microwave, showering Mr Tibbult with green and red. His face resembled the Italian flag until he rinsed away this detritus when the shock eventually abated.

Incidentally, do not try that at home…….. It’s cruel and you may end up covered in frog remnants.

Right, I’ve got to bring this blog to an end. I need to nip down to the garage to buy some reduced price out of date Milk Tray.