The changeability of the great British weather was perfectly highlighted today, when at 11am in Leeds heavy snow started falling; only for three hours later there to be sunshine and predominantly clear paths and roads.

As I write, throughout our metropolis there will be thousands of fed up kids currently on their trek home from school. At 11am today they would have been looking out of the classroom window ignoring Mr Shoes the Maths teacher, excitedly anticipating a tea time snowball fight, or building a snowman prior to dusk’s arrival at around 5.30pm.

After this afternoon’s swift meteorological turnaround, instead it’ll be an early evening shielding their iPad screens from the low winter sun, while playing Grand Theft of Thrones, or whatever the current ‘in’ games is these days.

One person who was really feeling the cold during the snow flurries this morning was a friend (who I’ll call Mr Babbage***) who I bumped into at the supermarket while out food shopping. Despite the best attempts of the early March chill to deflate his mood, he was in the high spirits following a recent sunshine break in Tenerife.

*** Not the Mr Babbage who was the computer on Family Fortunes.

Standing in the nithering conditions close to the store entrance, he “cheered me” with anecdotes of his indulgent vacation. Escapades during a seven day sun drenched sabbatical with his wife, on the Canary island situated off the north west coast of Africa.

He was particularly glowing in his praise of the accommodation, situated close to one of the many volcanic black sand beaches that grace Tenerife. He couldn’t speak highly enough of it’s location, cleanliness and the good customer service of it’s staff.

I can’t tell you how much him telling me “I’d hate to have been here freezing my bollocks off, instead of the wall to wall sun we had last week!” raised my mood.

Being a chap who enjoys his food and drink, Mr Babbage made full use of the ‘All Inclusive’ status of the resort. Evidently, it was the first time he’d chosen this type of holiday package; informing me the concept of ‘filling his boots’ whenever he desired food or drink met his full approval.

I don’t wish to appear envious, but I’m not sure I’d want to stay at a hotel where food is served in footwear not on crockery. To me it seems unhygienic and impractical. I’ve heard of chicken in a basket, but not bolognaise in a brogue or soup in a sandal.

He did have one or two gripes. Despite the aforementioned free all-day access to refreshments, he complained about there being no evening entertainment on offer…… Well, unless you count watching a bloke from Plymouth eat 10 burgers washed down with 12 pints of lager as entertainment.

When I expressed concerns about the health dangers of his overindulgent eating, he explained that to counter this risk he exercised every day, with a view of burning off the calories gained.

I asked if that was during a daily visit to the resort gym, to which he responded “No, I was back and forwards all day to the pool bar for drinks and snacks…… I never stopped bloody walking all week!” 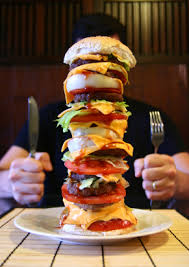 My wife Karen, who’d accompanied me on the shopping expedition, later told me that throughout my chat with Mr Babbage my utter disdain over his gluttony was written all over my face .…… I knew having “You’re a fat greedy tw@t” tattooed on my forehead would backfire one day.

Attempting to  get away from tales of his gorging, I asked if he and his wife partook in any excursions during on their break. Confusingly, he responded that one of the days they’d visited the Leaning Tower of Pisa. 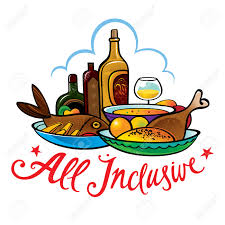 Growing tired now of the stories from the pig trough, in a bid to escape I told Mr Babbage I needed to get the perishable food home for refrigeration. Bearing in mind it was colder where we stood than a domestic fridge, it was a rubbish excuse, however I was starting to feel nauseous with his lamentable litany of lettuce dodging escapades.

After bidding each other farewell, Karen and I headed to pay for the weekly comestibles. Pushing the food laden trolley towards the checkout, Mr Babbage judgmentally shouted  “That’s a right trolley full, Gary!……. Have you ever thought about addressing your excessive food intake?”