During a recent sampling of Facebook’s fare, I was struck by the bizarre nature of some of the apps or themed postings that had rendered on my timeline.

For example, I saw a posting which asked the reader to add in ‘comments’ the main characters name in the last TV show they’d watched. According to the posting, that person would carry out your rescue should you have the misfortune to be kidnapped.

As the last show I watched was uber camp arbiter Judge Rinder, I just hope I never get kidnapped. I don’t wish to be disparaging, but I suspect the ransom would have to be paid if I was reliant on the judge to secure my freedom with violence. 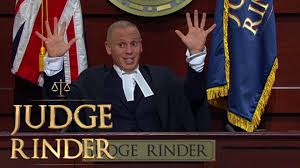 I don’t wish any disrespect to the flambouyant advocate who I’m sure is a decent fella. That being said, though, he doesn’t strike me as is someone who would earn a kidnap victims liberty through the use of force…… Unless I’m snatched by the Chuckle Brothers!

Saying that, though, I could be doing the camp counselor a discourtesy. When his life story ‘Take Them Down!’ hits the book shelves, we may find he’s an ex-special forces member who has gained the liberty of several hostages worldwide.

If you are Robert, my apologies for my uninformed assumption.

It’s nothing like Judge Dredd, though, who patrolled the fictional Mega-City One with a remit to charge, instantly convict, sentence, and execute offenders.

Sometimes I do wish the people’s court eponymous star Robert Rinder did have the power of execution for some of the reprobates he sits in judgement over!

For reasons only known by god and the Controller of ITV (although they may be the same being), he doesn’t share Judge Dredd’s powers. Subsequently, the loser of disputes over basic consumer issues and allegations of negligence can breathe easier!

Generally this genre of programme leaves me cold, so I’m baffled why I occasionally watch this show. All I can say is that it’s a bit like ‘rubber necking’ at a car crash. You know it’s wrong, but a prurient inquisitive side of you emerges for a quick peak.

Obviously, the question on Facebook is very much tongue in cheek and hopefully the chances of me being kidnapped in Leeds are remote…… Even if the Chuckle Brothers play Leeds Grand Theatre.

As a result the Judge can put away his kidnapper extermination gun (yes, I know there is no such thing) and concentrate on serious real litigation issues like whether old Mrs Harker at No.78 is the rightful owner of Tiddles the cat. 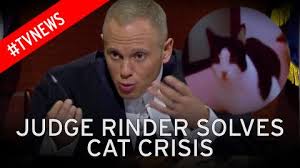 According to the Daily Mirror website “When the real-life barrister (Rinder) married his long-term boyfriend Seth Cummin in Ibiza in 2013, the wedding was officiated by actor Benedict Cumberbatch.” …….. I write some absolutely mad fictional stuff in my blogs but, according to the boys at the Mirror, this is true!

I’m not sure who took whose surname, if at all, but I hope Rinder didn’t take Seth’s!

Apologies for briefly regressing into a ‘Carry On’ movie script writer.

Apparently, Robert Rinder and Benedict Cumberbatch have been mates since they met at Manchester University. The judge was among the three best men when the Imitation Game star tied the knot with long term girlfriend Sophie Hunter.

I’m not sure why Cumberbatch needed three people to help him and his partner tie this knot, but perhaps he should have paid more attention to the practise when he was in the Boy Scouts. 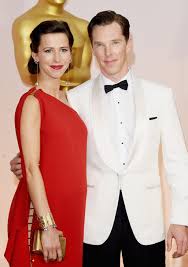 I enjoy a good courtroom drama and was brought up on a diet of shows such as Rumpole of the Bailey, Crown Court and the trailer dwelling Petrocelli in the 1970’s. Additionally, the fictional tales of the legal profession in TV shows Suits and The Good Wife are among my current Netfix box set addictions.

Judge Rinder isn’t a good courtroom drama, it’s tabloid reality TV. However, despite disliking that genre of TV, I find it strangely entertaining.

So much so that if I had ownership disagreements over the cat I know who I’d be straight on the phone to! …… We haven’t got a cat, though, so it’s unlikely to happen!