It was one of the funniest scenes in arguably the best loved British comedy in the last three decades. A lovable imbecile sat in a café with his mates, basking in the glory of his recent award for saving his employers (the local council) money by using the same broom for 20 years.

On cross examination from his sceptical friends, it soon becomes apparent that the broom had been the recipient of 17 new heads and 14 new handles in that time. However, that didn’t stop the amiable simpleton maintaining it was the same broom he received when he started sweeping roads.

Trigger (below) – He only had one broom! 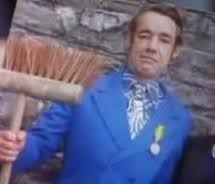 The two minute clip, showing dopey road sweeper Trigger seeking kudos for his frugality from his contemporaries, was broadcast during a 1996 Christmas trilogy of classic comedy Only Fools & Horses.

The popularity of the John Sullivan penned scene ensured its inclusion in one of the ten best Only Fools moments, as voted for by viewers of cable channel Gold.

Apparently, there is a ancient paradox relating to the question of whether an object with all of its components replaced remains fundamentally the same object. Named the ship of Thesus paradox, it has split opinion of ancient philosophers for century’s, including Socrates and Plato, so Trig is in good company.

In the first century publication Life of Theseus, Greek historian Plutarch questioned whether a ship that had been restored by replacing every single wooden part remained the same ship.

I would imagine Socrates, Plato and latterly Plutarch’s discussions, around the validity of this paradox, were probably a notch or two up the intellectual scale compared to Trigger, Del Boy, Rodders and Boycie’s light-hearted banter. However, I suspect they wouldn’t be half as entertaining as the feckless quartet.

Saying that, though, I could be doing Socrates a disservice. For all I know, he may well have been a skilled raconteur whose articulate oration during these debates was laced with humour. A Les Dawson of his generation, intertwining his philosophy about the paradox with mother-in-law jokes and hilarious monologues.

I can see it now, Socrates stood entertaining a packed Athens amphitheatre with gags like  “My mother-in-law says she’s gonna dance on my grave……. So I’ve arranged to get buried at sea!”

Socrates (below) – “My wife sent her photograph to the Lonely Hearts Club. They sent it back saying they weren’t that lonely.” 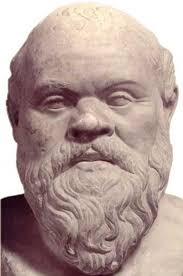 Additionally, Socrates and Plato may have been a double act not dissimilar to late entertainers Morecambe and Wise.

It would be great to think that in between his philosophical discussions with a man with short, fat, hairy legs, Plato would throw imaginary balls in the air and pretend to catch it in a paper bag….. If true, that’s another entry on my time travel bucket list!

So when does an object cease to be the original and become a different object? Well in the Trigger’s broom example, as it had none of the original components, there is no doubt it was new.

In the first century, Plutarch spent hours questioning whether the ship of Thesus would remain the same if it were entirely replaced piece by piece. I’d like to think it was with his mates in his local cafe eating a Full English Breakfast, like Trigger, but I somehow doubt it.

So, to conclude, it appears philosopher’s over the centuries have been divided about the ship of Thesus paradox. Namely what level of part replacement would constitute a brand new item.

With regards to Triggers broom, I leave the last word to cafe owner Sid who in the hilarious scene summed the situation perfectly, after hearing of Trig’s accomplishment:-

“How the hell can it be the same bloody broom then?”

Sid from the café (below) – He’s an astute geezer! 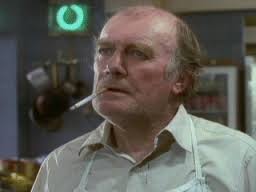 I’ll close with a Socrates gag from when he played Beeston Working Mens club in 410 BC. It was a tough audience but he soon won them over with his whimsical gags and polished delivery:-

“I saw six men kicking and punching the mother-in-law. My neighbour said ‘Are you going to help?’ I said ‘No, Six should be enough’!”