I wrote recently of my scepticism surrounding old wives tales! During that mini diatribe, I carelessly omitted to touch on the comedic value of these superstitious folk tales when misquoted!

As with mixed metaphors and idioms, there is something inherently funny about people attempting to impart words of wisdom, only for them to incorrectly delivered!

I have an acquaintance who can be relied upon to regularly amuse with inadvertently incorrect sayings.  He always raises a smile with musings such as “He smokes like a fish!”, “She wouldn’t say boo to a fly!”, ” I wouldn’t trust him with a barge pole!” and “Ronan Keating wasn’t built in a day!”

Ronan Keyrings – He wasn’t built in a day, apparently! ….. Or have the surname of Keyrings! 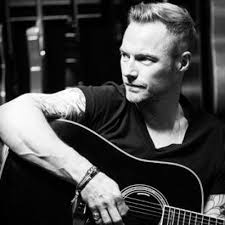 It’s not just misquoted old wives tales, metaphors and idioms that I find entertaining. I’m also fond of individuals who create their own philosophical soundbites! Things such as “If a crow flies west for the winter he’s going the wrong way!”, “Many a fool doesn’t shop at Costco!” and the incomprehensible “A man cannot have too many niff naffs!”

Niff naffs – You can’t have too many! 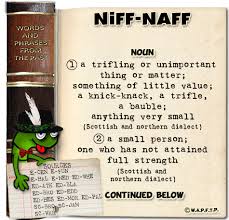 I’m of the opinion it’s ridiculous to try indoctrinate by the use of non-existent, incomprehensible and meaningless platitudes. I feel so strongly about this that I’d go as far as saying “The indoctrination of incorrect idioms is food for the lost souls of Byzantine!”

Despite my thoughts above, there is something inherently endearing about the naivety of the people who spawn such platitudes. The individual generally does so with a belief they are are filling in a knowledge void of their audience. In reality they have only created a comedic talking point!

A lost soul of Byzantine – “Did you say it was that way, mate?!” 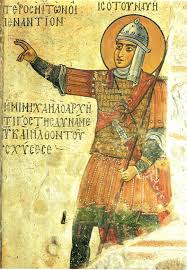 I started writing this narrative in the rest area of the Institute of Oncology at St James Hospital, in Leeds. I always attempt to occupy myself while I’m waiting for Karen to return from her treatment.

It’s important to me I don’t procrastinate during these times. After all,you know what they say, “A Ronan Keating gathers no moss!”

As I sat there seeking inspiration my mind went back to Karen’s philosophical words on the car journey to the hospital. As we discussed life in general and whether buying a pet eagle was a mistake, Karen gave me the following advice, “I always think if you don’t want people to know your business, don’t tell them!”

It was an epiphany of such magnitude it distracted me to the extent I nearly drove through a red traffic light! Never before had I contemplated not telling people things I didn’t want them to know!

My spouses teaching left me with a warm glow of satisfaction, which I imagine was similar to that Moses experienced on receipt of the Ten Commandments at Mount Sinai! …… Although, that might just have been due to the heater in my vehicle being too high! …… That’s me by the way not Moses, who I’ve never given a lift to!

At last I was in possession of what to do if I bump into a person, while out walking the eagle (not a euphemism), who I don’t wish to know my business! From now on, I will just remain aloof and if I mistakenly say too much threaten the individual’s silence with the eagle!

Prior to the start of this paragraph, I took a writing break so that Karen and I could visit my parents in Wakefield.

While we were there a discussion took place surrounding old wives tales. As I expected, my mum didn’t lack a contribution of folk law tales passed on by her mother!

These included jewels such as:-

I was amused by these old wives tales from my maternal grandmother! I never met her a she died before I was born, but it sounds as though she was as mad as her daughter!

I was intrigued to know what kingcough was as I’d never heard of it before, so I googled it! Bizarrely the top entry in the responses was:-

What was Kingcough? [Archive] – Sheffield Forum

Does anyone remember our Mums telling us not to sit on cold steps or concrete as we’d get kingcough in our bums! Dont know what it was …

Kingcough – Chuff knows what it is!! 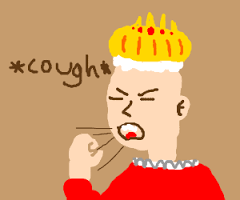 Amazingly, the online question above was almost word for word what my mum had said earlier. Due to its top placement on google, it certainly added to the comedic value of the discussion!

After we all stopped laughing, I was none the wiser as to what kingcough was but we left my parents in better spirits than when we arrived! …… Oh balls, I’ve just realised I forgot to tell them about our eagle!