With an early departure to Birmingham scheduled this morning for the Mally (my dad) and me, I decided an earlier start would be gained by kipping at my mum and dads last night.

During the 16 hours or so at chez Strachan senior, something quite profound dawned on yours truly regarding elderly peoples hearing. After a series of recent inaudible conversations with mon mater and pater, I suddenly realised that the elderly peoples audio pickup may not be the result of the aging process.

It maybe just that their decision making requires re-calibrating so they chose better moments to verbally communicate. My observation is the result of my time at my parents home overnight. It was clear that they always seem to chose an inopportune moment to chat to one another.

Nearly every sentence during my stay had to be repeated. Apparently not because of ear drum deficiency; it was merely they chose to speak when the kettle was boiling, the hob extractor fan whirred cacophonously, someone was vacuuming, or Olympic TV commentary boomed volumously.

At times when background noise was conspicuous by its absence, the dodderers were devoid of chatter. When their distinct Yorkshire tones could have been heard, it was as though we all passed through a portal into Sponsored Silence Land. A place of endless charitable support, audible pin drops and shushing!

Perhaps I’m well wide of the mark, diminishing hearing quality may well be the sole culprit for the requirement of regular elderly responses  of “Pardon?” or “What?” 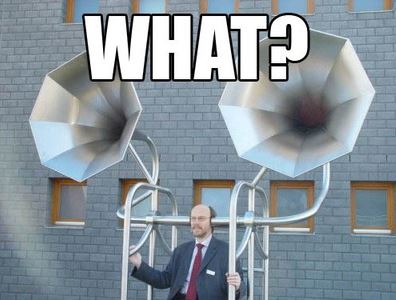 However, from evidence collated when studying Mally and Maggie’s behaviour, it seems pretty conclusive their problems lay with speaking at inopportune moments. Times of background din, that would even interfere with Frank Goodhearing’s ability to comprehend messages. *Frank Goodhearing is a fictional character with chuffing brilliant hearing.

As an old friend who frequently mixed his metaphors once unforgettably proffered, my parents could actually have “Ears like a hawk!”

Anyway this morning, after an inaudible breakfast chat where I haven’t a clue what was said due to distracting kettle noise and cereal box shaking, we were ready to depart for the sunny climbs and endearing tones of the West Midlands.

Prior to departure we did our final checks. Cricket match tickets, Birmingham hotel reservation details, toiletries, my dad’s three coats and two waterproofs, holdalls and a bag full of crisps, Lucozade and fruit gums.

My dad pondered whether to label his holdall; I think he did anyway, however as the cuckoo clock interrupted him mid flow I’m not 100% sure. Eventually he decided he would only have to walk it from my car boot to the hotel room (when he’d have the bag in his hand anyway) so binned the idea……… A decision even the cuckoo concurred with.

So at 07.32 a black Astra left the drive of Chez Strachan senior laden with holdalls, coats, waterproofs, crisps, fruit gums and Lucozade. Unfortunately, the driver was a opportunist thief who’d driven off while we said goodbye to my mum.

I took several lessons from this incident. Firstly, never leave your keys in the ignition of an unattended car. Secondly, if you shout “Come back you thieving bastard!” to a car thief it doesn’t make them inclined to return the vehicle!

Incidentally, the scenario in the last two paragraphs didn’t happen. I added it to lighten the atmosphere of this rather serious narrative.

What really happened was Mally and I left in the black Astra at 07.32. As we left the estate, my dad waved royally to fellow villagers, who’d risen early to see him off.

The audience was predominantly made up of elderly women who excitedly returned the wave  to their heartthrob (my dad not me). As they stood in their bullet proof East Ardsley Bowling Club onesies, my overworked windscreen wipers were forced to remove the collection of items thrown to my lothario pater.

Underwear, outerwear, Tupperware and other things that end with wear (or ware) rained down as I drove slowly through the village. Being a regular occurrence when he ventures outdoors, my dad is used to it and shrugged it off.

However, I found the fact the old dears weren’t fenced in intimidating. Not to mention their gargantuan undies were causing major driving visibility issues.

We eventually got onto the M1 motorway heading south. While listening to a Billy Joel cd, the Sat Nav woman and scoffing cola bottles, Mally and I chatted about old cricketing anecdotes. At least I think we did; I can’t be sure as I couldn’t hear my dad due the Billy Joel cd and Sat Nav woman.

Due to wheel bearing problems on the black Astra around 50 miles into the journey, we never got to Birmingham. As I only had one relay allowed under my breakdown cover, I had to take the unwanted decision to abandon our plans to watch Yorkshire in the t20 Blast finals day; instead returning back up to Leeds.

So my hopes of a cricketing weekend with my dad went pear shaped. Instead we were left with a 90 minute wait for a recovery vehicle and a subsequent journey straight back to my parents.

Although, being annoyed at missing his beloved county cricket team play in finals day, my dad soon cheered up when the breakdown engineer dropped him off at Elsie’s on his way home.

Hmmm…. I wonder if it was Elsie who sabotaged my wheel!!

Waiting for the recovery vehicle outside of Chesterfield