Yesterday, I spent time sat in the recovery vehicle after car troubles meant aborting a journey to the t20 Blast finals. During this undistinguished hour of my life, I reflected on the decimation of my plans for some ‘father and son’ time watching cricket with my old man.

In addition to reflecting, I pondered, followed by a period of mulling things over and finally as we approached our destination in Leeds some deliberating. I’d also wanted to undertake a spot of contemplation, but I didn’t have time before we arrived at my parents home.

During these times of reflecting, pondering, mulling and deliberating, the overriding thing that struck me about the collapse of our weekend arrangements was ‘Why the bloody hell did my dad bring three coats and two waterproofs?’

Noah only took two coats and two waterproofs on the ark when it rained for 40 days and 40 nights! So why the hell Mally needed that much protection from 10 hours of West Midlands precipitation was beyond me.

“Right then lads and lasses that’s the Ark bought. Now onto Next to get coats and waterproofs” 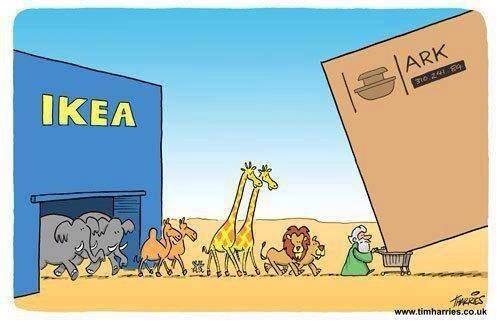 It is written by Pharisees that Noah was disappointed that his pairs of coats and waterproofs did not mate as the animals had. I, though, was mightily relieved that my pater’s protection garments avoided the ignominy of this in my car boot.

Due to their considerable taking of space, I could barely get my holdall into the trunk, that’s without the pater of tiny Regattas in the trunk of my car.

I dread to think how many coats my padre would have took if we’d have gone away for a week, instead of the planned one night in England’s second city.

At one point, as I struggled making a spot spacious enough to put my bag, I thought if Mally insisted on all of this rainproof clothing I’d have to leave the spare tyre!

Things weren’t made any easier by his refusal to compromise on my assertion that he should leave behind his ‘lucky’ bucket. He takes this dinted old tin pail, which he claims were passed down to him by Sioux ancestors, everywhere with him.

I’ve researched the Strachan family tree over the last two hundred years and I’ve not found any Sioux blood, but we like to humour the eccentric octogenarian. I’m not sure how the Sioux tribe got hold of the tin raw material to make it, but some things are best left unasked!

To clarify, I went back two hundred years with my genealogical research, not that I’ve been undertaking my ancestry investigation for two hundred years!……. That would be crazy!…… And impossible! Eventually, with a car laden with coats, waterproofs, holdalls, and ‘lucky’ tin water holders we managed to get away from chez Strachan senior at 07.32am.

I know it was that specific time as although we left the house at 7.30am, before I could start the car ignition Mally insisted on a two minute silence to remember those lost in Meadowhall Shopping Centre car park.

After departing things went swimmingly for the initial section of our jaunt. My dad’s navigation control gene didn’t kick in and he played nicely with the Sat Nav voice.

The only fly in the ointment was him going into a brief tizzy when I refused to stop at Woodall Services, where he wanted to purchase another coat ‘just in case’.

Around 40 mile into the voyage things took a turn for the worse when an intermittent metallic sound began emanating in the rear of the car. Initially, I ignored the sound, thinking it was probably one of the coats zip fasteners vibrating against the tin bucket.

However, when this increased in volume and frequency it became clear there was an issue with the car itself. Either that or one of the coats had a sodding great big metallic zip fastener.

At this point I thought it prudent to leave the M1 motorway, as the section I was driving on was bereft of a hard shoulder making stopping dangerous should the car become undriveable,.

So, convinced the ‘lucky’ bucket wasn’t the culprit of this metallic grinding, I pulled into a nearby hotel off the motorway and contacted breakdown services. An hour and a half later, the car was loaded onto the recovery vehicle, my father and I were in the cab at the front and our cricket weekend was no more.

I have been asked why I didn’t ask the recovery guy to take us to Birmingham to watch the game. That’s simple really, my breakdown cover only allows for one relay. So if we’d have taken the Birmingham option, I’d have had to get the car bearings fixed in Brum, or have to pick up extortionate return travel expenses.

Anyway, we got home safely and my dad is fairly philosophical about the whole experience, opining that “Worse things happen at sea!”

When I asked him to elaborate he responded “Well, a shark could have eaten my coats, waterproofs and lucky bucket!”