I’m having my boiler replaced today. Incidentally, that’s the house boiler not mine!…… I’m not equipped with a boiler; not since I had it removed after problems with my flue!……. Flaming heck I’ve gone into ‘Carry On….’ mode, I best move on quickly!

When I was a nipper, my mum said to me “If you ever go into ‘Carry On….’ move on quickly…… And stop picking your nose you filthy bleeder!”

Above was the first time I’ve gone into ‘Carry On…..’ mode since that advice. Although I’ve been less successful abstaining from the nose picking!

As I write there is a problem with the fitting of the boiler because of a flue problem (no I’m not going there, don’t worry). It looks as though instead of where the current flue is can’t accommodate the replacement flue, so we may need vertical one to feed through the roof…….. Will you stop sniggering! How old are you?

For the uninitiated, ‘Carry On….’ mode is resorting to double entrendre laden jokes, as was the want of the 1960’s/70’s British movies that bore that name.

Those movies, which shot the likes of actors Kenneth Williams, Sid James, Hattie Jacques and Barbara Windsor to fame, achieved cult status and are still watched with fondness by many, despite not standing the test of time that well.

They were crammed with brash gags and Benny Hillesque visual comedy showing scantily clad young women being chased by middle aged blokes, who in real life were predominantly gay.

I loved watching them as a kid, especially the camping one where Barbara Windsor’s bra flew off and you nearly saw her boobs. It was a cheap, but innocent, thrill for this pubescent young lad.

Although still widely broadcast on a variety of cable channels, I struggle watching them these days. On the rare occasion I do view one it’s for purposes of nostalgia, not because I find them funny anymore.

I really have surpassed myself with randomness today. How the heck did I get from talking about having my boiler replaced to middle aged men chasing busty young ladies. Perhaps my wife Karen isn’t being complimentary when she says “I don’t know how you think some of this stuff up!”

Freud would probably diagnose my behaviour as the result of repressed childhood feelings and too much nose picking. But what the hell does writer Emma Freud know about it!

The discussions into the outside location of the flue are still continuing….. You really are a child! ….. A supervisor is now attending chez Strachan to discuss how we progress this things.

To be fair to the engineer, who’s been here since 8 am, he has strove valiantly to find a solution to these issues within allowed regulations. The issue appears to have been a surveying oversight.

The engineer has just told me there is a speccy kid with a red hooped jumper acting suspiciously in the front street……. So now he’s found Wally I hope he can find a solution to my flue problem!

As I write a solution has been found to the conundrum…… Good old Wally! 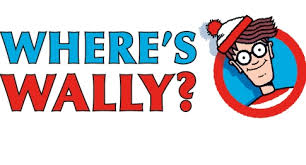