Last year on a break in Lanzarote I purchased a wristwatch that became affectionately known as my holiday watch. I know that affection and watches aren’t normally bed fellows, but any port in a storm and all that…….. No, I haven’t got a clue what that means either!

It’s not a particularly flashy watch. It is unlikely to win me the Institute of Horology’s ‘Flash Holiday Watch of The Year’ award. It’s equally unlikely to make a fellow holidaymaker exclaim to a friend “Blimey have you seen that blokes holiday watch?! It’s bloody brilliant!”

The aesthetic beauty of the timepiece wasn’t a factor I took into consideration when I set foot in the Costa Teguise shop last February. My main consideration was that it had to be waterproof, functional and reasonably priced.

I won’t wear my ‘good’ watch in the pool or sea, even though it is waterproof, so an alternative timepiece was required.

In the end I was seduced by a royal blue watch with yellow numbers. It had a rubber strap, was waterproof up to 100 metres, could light in the dark and was not extortionately priced.

So feeling happy with the selection, I paid the Spanish shop owner, told him “Gracias senor” (you didn’t know I was fluent in Spanish did you?), and left the shop with my new holiday watch fastened securely on my left wrist.

With a misguided sense of pride I strutted peacock like, with my dandy new timepiece, towards the beach. It was there I got my first surprise about this watch, when I found out from the associated instructions that waterproof up to 100 metres meant 100 metres from the shop I bought it from. 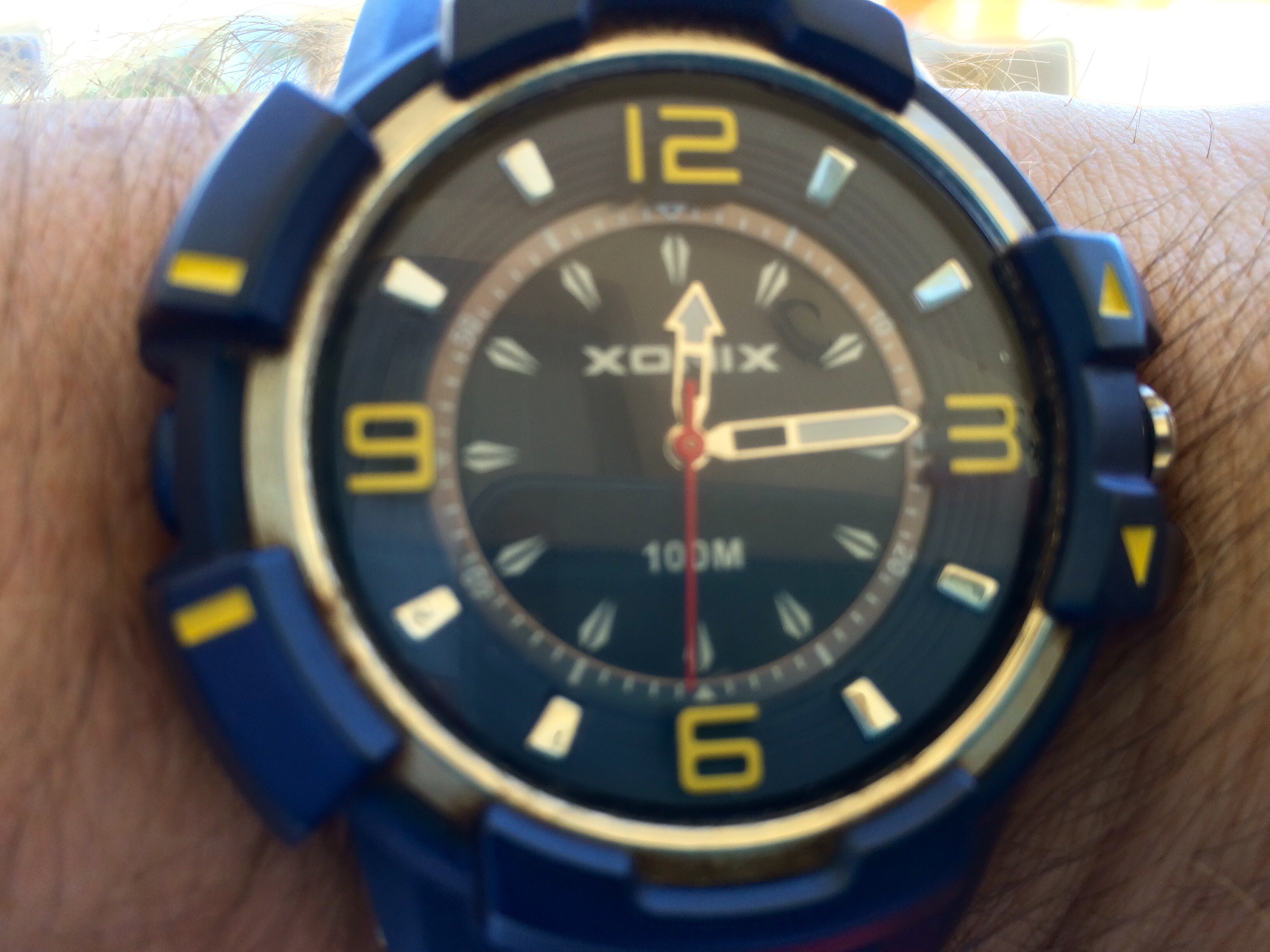 I felt cheated but as in all reality I won’t be swimming with sharks at 100 metres, so paid no further mind to the misleading wording on the watch face.

The reason I mention my holiday watch is that I got my second surprise about its functionality yesterday evening, upon using the button to light the face for the first time.

As my wife and I sat in a bar listening to a talented lady sing songs from the Great American Songbook, Karen asked me the time. I normally acquire this from my phone, however, on this occasion I thought I’d leave it in my pocket and utilise my affectionately know holiday watch.

With it being 10.30pm (I learnt that later), it was very dark and I couldn’t read the face of my timepiece. So with an over the top sense of ceremony, I pressed the yellow button on the side for the inaugural illumination of the face light.

“Well then. What time is it, Gary?”  asked the north east England tones of my spouse, as I sat open mouthed looking at the illuminated wristwatch.

“What do you mean, you don’t know?!….. You lit the watch to see and I know you can tell the time as you were off like a shot when you saw it was time for Happy Hour earlier! ” she exclaimed.

“Yes, but that button only lit up the numbers and not the watch hands. So I know it has 12 numbers on it, however what the hands are pointing at remain a mystery!”

I then took out my phone to let my wife know it was 10.30pm, whilst thinking to myself that no wonder the watch had been so bloody cheap!

What ws the point of lighting the numbers and not the hands. If they’d have designed it to just light the hands and not the face at least I could take a reasonable stab at the current time… Unless I had my wristwatch upside down when 10.30 would read as 4.00.

I felt cheated again by this purchase which was no longer affectionately called my holiday watch, and now went under the moniker of bloody useless in the dark holiday watch!

The only blessing was the fact I didn’t buy this thing to wear 100 metres under the sea, watching Great White Sharks.

Here’s Gaz. He’s got his holiday watch on, he’ll tell you the time! 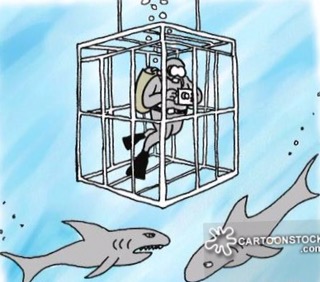 I mean can you imagine a shark swimming up to me in my protective cage, saying “I see you’re wearing your holiday watch, Gaz! …. What time is it mate? I promised the missus I’d be home for tea at 7!”

Only for the ignominy of me having to respond “Sorry, mate the hands don’t light up on my holiday watch…… I can show you the numbers 1 to 12 lit up though if you want!”

I doubt the shark would be impressed and, to be honest, you can hardly blame it!” They cannot wear their own timepieces due to design oversights and they rely on us to guide them when they need to get home, before their missus’ go ape shit for burning the dinner!

Right I’m off as I have company. A fellow holidaymaker has just approached me, saying “I like your holiday watch mate. I see it even has a button to let you see the time in the dark!!……. What do you mean do I want to buy it?!…… I bloody say I do!”