Once upon a time, an England football team being knocked out of a tournament would be the worst thing happening in my life.

Once upon a time, I’d take it personally if my national side failed to progress to the latter stages of the World Cup or the European Championships. Ordinarily, this would lead to weeks of me sulking and feeling unbridled envy of the German, Brazilian, Italian and the Dutch populous, for whom the party went on.

Lee Dixon didn’t say that last night but Roy Keane’s face made me laugh, so I included it! 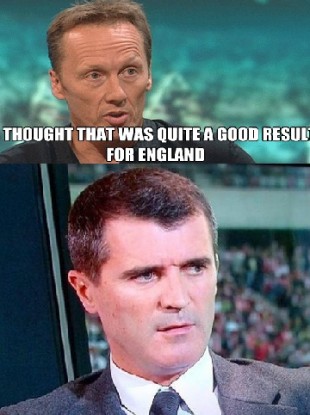 However, times have changed and I woke this morning completely indifferent to the fact that last night in the French city with the Promenade D’Anglais, the Euro 2016 tournament said au revoir Anglais.

I can honestly say that last night was the first time, in many years watching England, that I really couldn’t give a toss about them being defeated.

At the final whistle, following the defeat of our clueless nation against the underdogs Iceland, I sniggered cynically at the ineptitude of the men in white, leading to my wife accusing me of schadenfreude. I disagreed with her, adding that I’m not really sure what the German striker had to do with our defeat.

After I cracked that weak gag above to Karen last night, she accused me of not knowing what schadenfreude meant. I actually did, but thought I’d let her have the intellectual high ground for a bit longer by responding “Is it writer Emma Freud’s granddad?”

“No, it’s the pleasure derived from other people’s misfortune.” my spouse advised me patronisingly.

“Do you mean like laughing at anyone who eats your Sue’s cooking?” I continued, still feigning ignorance.

“Apart from the fact the knife and fork run off when she brings the food to the table?!” I quipped.

“Or the fact her crockery put itself up for adoption so they didn’t have to touch the culinary minefield of her fodder!” I added.

Sue’s crockery and cutlery panicking prior to serving! 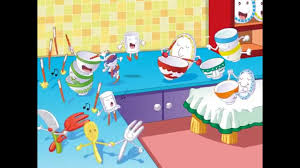 Before my diminutive other half could response to my quips about her sibling, I came clean, admitting I’d known what schadenfreude was all along.

She responded by kicking me in the nuts and, as I doubled over in pain, responded “Good. then you’ll know I’m basking in it it as we speak!

Schaden – Apparently no relation to Emma 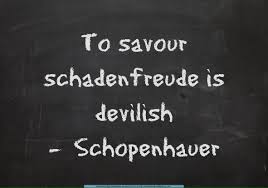 Incidentally, when I said my ‘diminutive other half’ above I meant my wife, not that one half of my body is significantly smaller. For example, my legs aren’t only 10% of my full body frame……. I just thought I’d clarify that in the event you thought I was half dwarf.

Anyway back to the England football debacle in France Euro 2016. Watching them play yesterday evening, a first half incident re-opened old footballing wounds from my childhood.

My earliest football memory is the 1970 FA Cup Final, when my team (Leeds United) in white with red socks, conceded a goal after their blonde keeper (Gary Sprake) let in a soft shot diving to his left, whilst playing a team in blue.

Yesterday, I had a terrible flashback to that final (that we eventually lost after a replay), when England in the same combination of kit conceded after fair haired goalkeeper Joe Hart failed to keep out a weak shot from an Icelandic (in blue) striker.

It’s not the most interesting thing you’ll read or hear today, but I thought I’d share it regardless!

Gary Sprake’s letting a weak Peter Houseman (Chelsea) shot slip through his grasp in the 1970 FA Cup Final at Wembley. 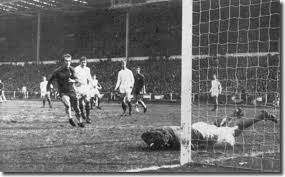 To close, I wanted to share a short conversation I had with my diminutive other half (still the wife, not I have little legs) regarding last weekend’s acts at the Glastonbury Festival:-

Karen – “I was disappointed with Earth, Wind & Fire.”
Me – “Why’s that?”
Karen – “Their lead singer died recently and they just don’t sound the same.”
Me – “That’s a bit harsh. It sounds to me he’s got a bloody good excuse not to sound as good as he used to!”

One last thing, if England losing is worst thing going on in your life right now then count your blessings!