I’m in a high state of alert sitting penning this prose. Yours truly is under strict orders from my daughter Rachel not to move from the living room of maison de Strachan while she’s at work – A consequence of the expected arrival of an urgent package I’m required to sign for on behalf of my youngest child.

No, it’s not the delayed arrival of the  ‘My Little Pony’ we ordered her (as a 5 year old) in 1998, which never turned up…….. Like the horse Shergar, I suspect the pony will never make an appearance after all these years…… Unless it’s in the shape of a ‘My Little Glue Pot’.

I’ve been given orders to stay in the living room all day by my offspring, ensuring the safe recorded delivery of her visa and passport. Her angst exacerbated by the fact it’s only two days before embarking on a trip to China. 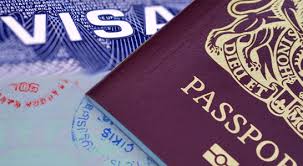 Rachel has been given assurances they will both arrive today by recorded post. However, due to the close proximity to her departure, she remains rather tense about the situation, consequently she’s keen I don’t miss the postman’s knock, as a signature is required.

She didn’t stipulate whose signature, so I’m currently practicing Ainsley Scragg Athletic prop forward Persil Chump’s squiggle…… If it requires signing by anyone other than Gary Strachan or Persil Chump, our Rach might be in stum.

My offspring has placed me under real pressure here!

For example, earlier I was bursting to pee, providing me a dilemma of risking going to the loo – Not to mention which toilet to use.

Do I dare utilise the one downstairs? ….. Located further away from the front door than the one at the top of the stairs, it would be the bathroom where I’d be more likely not to hear the door bell.

Luckily, I managed to stop mid pee and, with as much haste as my bladder would allow without urinating on the landing, answered the phone in my bedroom.

“Hello, Is that Mr Maynard?” inquired the chirpy voice of a polite woman at the other end of the phone.

After I said no, she apologised for troubling me, unsuccessfully tried to sell me a book on the Maynard family history and rang off. Subsequently, I rushed back to the loo, again as hastily as my bladder would allow, concluding the call of nature that had earlier been so rudely interrupted.

Actor Bill Maynard (below) – Have I just had one of his phone calls? 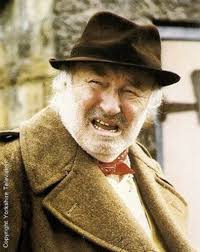 After washing my hands, it dawned on me how unnecessary it had been for me to interrupt a pee to answer the earlier telephone call.

After all, the postman wasn’t going to ring me to announce he was at the door with a delivery I needed to sign for …….. For one thing the postman wouldn’t have our phone number……. If he did, I’d bloody want to know why!

Anyway, I’m currently sitting at the table in the company of my trusty laptop. I’ve one eye looking out of the front window, one eye on the front door and one eye on this narrative……. Blimey, I’ve just realised I have three eyes!!

I don’t know why I’m continually checking out of the window for the postman. After all, as my dad always used to say “A watched kettle never boils.” It was a saying that confused me, as when I watched kettles they always boiled…… Apart from the time I forgot to turn the electric socket on.

Some days, he’d mix his metaphors and say “A watched clock never boils.”, which I can confirm is true …… Incidentally, I have other hobbies that aren’t as boring as watching kettles and clocks seeing if they boil!

Anyway, there goes my doorbell and through the frosted glass of the front door I can see a bloke in a very bright red jacket. It’s either the postman or Santa’s in need of a new calendar. 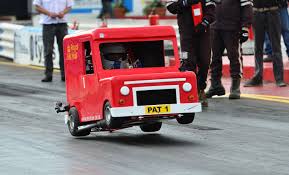