“Right, then, it’s Manchester United versus Spurs in this cup tie here at Old Trafford. And it’s the fair-haired, slightly balding Charlton to kick off.”

Words of commentary delivered with gusto by sports teacher Mr Sugden (played by the late Brian Glover) in a scene from 1970 British movie Kes. His descriptive words not only kicking off a PE lesson football match, but the start of a pricelessly funny and much loved part of Ken Loach’s movie. 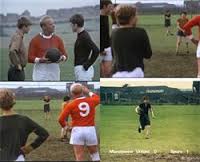 Despite this regular use of humour throughout the movie’s screenplay, a paucity of decency and humanity runs throughout. There seems no escape from the social problems ingrained in this kitchen sink drama that charts the grim existence of a marginalised teenage boy and his eponymously named kestrel.

Like the Nuneaton born director’s equally dark and highly acclaimed Cathy Come Home and Poor Cow the movie was shot in cinéma vérité style. The setting a Yorkshire mining town in the late 1960’s

Even though the film was shot in colour, it felt like it was photographed in monochrome, a metaphor for the unrelenting grimness of this young boy’s life.

The only colour within the movie seemingly the bright scarlet Manchester United football top adorned by Sugden, with its big white number 9 emblazoned on the back.

Below, the class freezes as they wait to be picked into teams 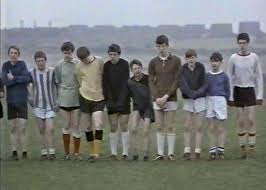 Mr Sugden’s behaviour as the overbearing teacher, who was not slow to hand out corporal punishment, may surprise today’s younger generations. However, from my experience it was a pretty accurate portrayal of comprehensive school life in 1970’s northern England.

I don’t recall ever having a sports master who commentated during PE lessons (although I did accompany the occasional volley with “Clarke, one-nil!”

From memory, no one pretended to be Bobby Charlton during the match either. However, I recollect some were slightly balding whose punishment of choice was a smack with a training shoe.

Teachers can’t punish by training shoe anymore. To school kids these days, a punishment by training shoe would be the ignominy of wearing cheap branded trainers, instead of their brightly coloured Nike’s.

As I said above the cruelty and despair was never far away from even the most light hearted scenes in Kes. During the game of football alone, anyone who crossed Sugden was given a clip around the ear, including two freezing cold fat kids (who hated football) playing ‘slaps’.

For the uninitiated, ‘slaps’ is a game where you test your opponent’s reflexes by attemping to slap their hands before they have chance to move them out of the way.

‘Slaps’ hasn’t the profile of being granted Olympic status yet, or been snapped up by Sky Sports in their never ending quest to fill their schedules. However, it maintains it’s place in British culture, much in the way giving donkey bites and Chinese burns do!

I’ve titled this blog ‘He wants bleedin’ milkin’ the fat get!’ after the cry of the opposing team captain after Mr Sugden had sent him from the pitch for swearing. 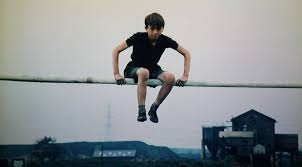 In a further misuse of power by the teacher, main character Billy Casper (played by David Bradley) was forced into a cold post match shower. It was his punishment for conceding the losing goal to Sugden’s opponents (Spurs) due to the distraction of swinging on the goal posts.

It was far from the end of the problems for the young boy, whose only solace from the cruelty of his circumstances was the kestrel he lovingly reared and trained.

The love and care Billy Casper bestowed on his bird of prey was the type sadly missing from his own life. He more or less has to fend for himself due to a missing father, neglectful maternal care and a fractious relationship with his bullying elder brother Judd.

The only person who showed the isolated boy any empathy was teacher Mr Farthing (played by the late Colin Welland). In his BAFTA winning performance, Welland played the only character who displayed any warmth and support to the young lad. 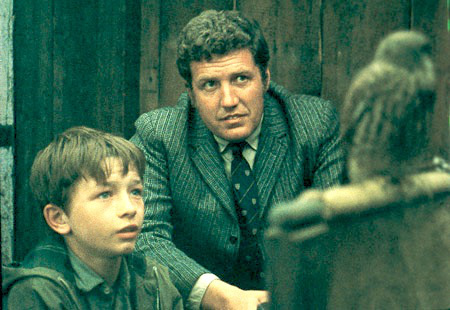 As is a feature in this genre of gritty working class British film set in the 1960’s & 1970’s, the ending of Kes was one of spite and melancholy.

Billy Casper, whose only ambition in life was to avoid working ‘darn pit’, the victim yet again of spite and vindictiveness at the hands of someone he’d expect to fight his corner, his brother Judd.

Below is the equally funny but somewhat less cruel spoof scene from Kes, written and performed by comedians Vic Reeves and Bob Mortimer.