Well, I’ve just blew in from the Minster city, which is similarly mighty pretty! ….. Although, the guy I chatted to outside of Betty’s, who got his dentures from a car boot sale, perhaps needs to get to a dentist pronto…….. Or at least remove the three week old broccoli from the palate.

The Minster city I’m referring to is Yorkshire’s historic county metropolis of York, where I spent a pleasant few hours today visiting my son, who lives close to the city centre. 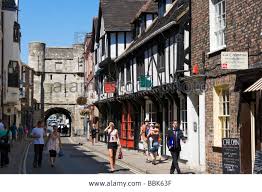 As many people will know, the city was one of many areas of Britain heavily impacted by flooding in December. Parts of the this cosmopolitan city, with history oozing out of every pore, were under feet of water less than two weeks ago.

My wife Karen, son Jonny and I spent some time trampling York’s cobbled streets, which over the centuries have been trodden by royalty, nobility and Look North anchorman Harry Gration.

At midday, we left Jonny’s flat meandering slowly three abreast, making the most of the city’s character and the fact there was an 3 for 2 offer on shampoo at Boyes.

As we walked it was difficult to believe ten days ago Calamity Jane would have been unable to ride the Deadwood Stage into town. Due to the hazardous water levels, Calam would have needed the Deadwood Gondola.

I was also in a state of disbelief at how Boyes can sell toiletries at such low prices.

More importantly, though, it was heartening to see this captivating city on its feet again only a matter of days after partly resembling Venice’s Grand Canal.

With use of candour, I suspect the business as usual appearance was one of swan like deception. By that I mean elegant and beautiful on the outside, but hidden below is something far less aesthetically pleasing.

One of the streets we crossed was Huntington Road, which is about 100 metres from Jonny and his partner Jenny’s flat. It is a long road predominantly made up of Georgian houses (some of which are listed buildings) that was one of the worst hit streets in the city.

I only wandered across the bottom of the road so can’t comment on the whole street. However, from what I saw, it was reassuring to see the imposing town houses stood proudly, despite the interior damage inflicted by their watery foe.

It seemed like the houses were defiantly stood to attention as though on an inspection parade, while awaiting a post-battle casualty roll call.

I’m not naïve enough to think all is back to normal, following the sights on our family’s meander through my favourite UK city that rhymes with pork! …… To clarify, it would be my 2nd favourite if Edinburgh had rhymed with the versatile meat!….. No offence York!

Thousands of people will remain scarred from this devastation by H2O, in many cases not recovering from the damage to their properties for many months, if at all!

Jonny and Jenny were lucky in that the water didn’t breach the perimeter of their abode. Thankfully for them, the River Foss reached its peak with water 10 foot away from their ground floor flat!…… Thousands weren’t so lucky! 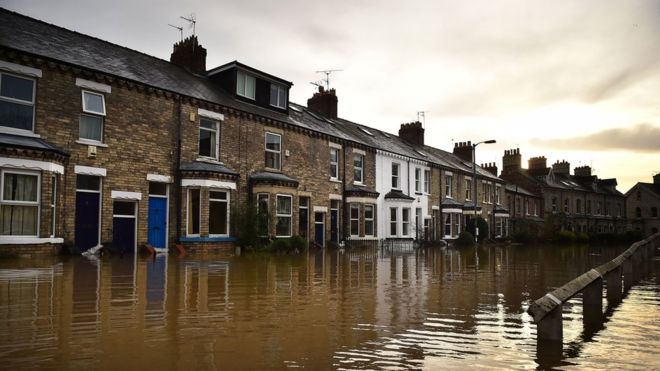 When we arrived in the city centre, it soon became evident that York’s citizens were keen to portray to the world (and a busker outside Next) that it was business as usual.

For lunch we wandered into one of the many eating establishments within the historic walls of the city, where we troughed a very agreeable pizza.

When I say agreeable, there was one stage when I though Karen was going to ‘kick off’ in the pizzeria. This was the result of ordering a Quattro Formaggio (Four Cheese) pizza which, when it arrived, much to her chagrin she claimed only had a three cheese topping!

Thankfully she calmed down when she was advised the fine yellow powder she thought was dandruff turned out to be parmesan, the fourth cheese! I was relieved Karen didn’t make a Calamity Jane like saloon scene as I’d left my Colt 45 at home!

My little Mrs was pleased to get her fourth cheese. However, I think she has missed out as dandruff is a great pizza topping!

It was great to see York portraying such a defiant stance and resilience after nature’s unprovoked assault in December. You need to do better to floor this proud metropolis, which has survived centuries of wars, famine, disease and a visit from Piers Morgan…… It survived those impostors and recovered; it will do so this time.

Without wanting to tempt fate, the message from Yorkshire’s county capital appears to be the audacious “Is that all you’ve got?!” 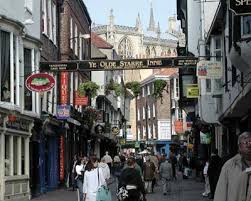