This Saturday morning sees a frosty, unwelcoming and miserable start to the day. That’s not a weather report, I’m referring to the atmosphere in Chez Strachan after my daughter Rachel woke early on her day off!

I told Karen that playing a bugle reveille at the crack of dawn wasn’t a good idea….. Dawn wasn’t too enamoured either!

Rachel’s never good on a morning. A perfect example of this was on Thursday when she displayed disquiet at being inconvenienced while I drove her to work.

The culprit, who had the temerity to ruin her entitlement of a hassle free journey to her place of graft, was the lollipop lady outside the local school. Rach grew ever more impatient during a delay resultant after our vehicle was halted by the authoritative lady with the magic pole.

When I say a magic pole it obviously isn’t magic, it’s just a 5ft long stick with a board at the top with a message requesting that the motorist stops on request. Subsequently, allowing the woman in white to safely guide the local primary school brood over the road to school.

As we ground to a stop and the children, along with their stressed looking parents, commenced crossing the road, my cherubic daughter tutted, sighed and said “Damn, I’ve forgotten my lucky ear protectors.”

I wasn’t able to turn around to get them, so I told her she’d have to do without for today. I have to admit that I really don’t see the need for them in an office environment anyway. …… Well, apart from for her colleagues to negate the sound of her whining!

Additionally, I made a mental note to get myself a pair for my next car journey with the girl my wife lovingly nicknames Polls (as in short for Polly).

As we sat, the somewhat confrontational demeanour of the lollipop lady was further enhanced when I caught sight of the unorthodox wording of ‘Stop or I’ll kick shit out of you!’ on her lollipop board.

A priest who refused to slow down paid unfortunate consequences! 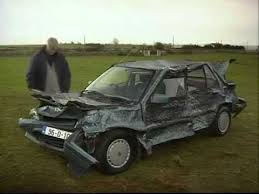 As the last child crossed, she turned around at me and growled, before leaving the road at snails pace to allow me to proceed with my onward journey. That’s the lollipop lady, by the way, not Rachel.

The fact we were now in motion again didn’t pacify my 22 year daughter. As we weaved in and out of parked cars, avoiding flying scooters and rolling Mutant Ninja Turtle drink holders, Rachel was not in the mood to let sleeping dogs lie.

“That was ridiculous!” she exclaimed to anyone who was interested, which I wasn’t. “She let every Tom, Dick and Harry through before letting the traffic move on again!” her tirade continued.

Although tired of her whining, I did know where Rach was coming from on this occasion. After all, the lollipop lady was waiting for individuals who were 50 yards away from her, while she stood in the middle of the road halting the progress of several automobiles.

However, I think Rachel may be ‘wide of the mark’ with her assertion that the woman was only letting kids with a certain name cross. I’m absolutely positive that kids other than those named Tom, Dick or Harry were also being allowed to safely cross for school. In particular the girls! 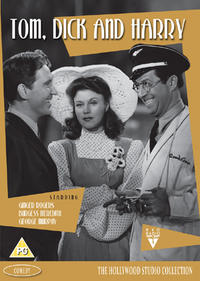 To try and cheer my offspring up, I suggested the remedy to melancholy advocated by Julie Andrews in the movie ‘The Sound of Music’. So, in my best nun’s voice, I started singing:-

However, Rachel must have been really low that grey winter’s morning, as even Julie Andrews helpful suggestions couldn’t lift her from her malaise.

Well I’m assuming she wasn’t appreciative of my attempts to make her feel more upbeat. I’m no human behavioural expert (unlike croupier Billy Behavioural-Expert), but if someone annotates the words “Stop singing Sound of Music songs, or I’ll thump you, dad!”, I’m pretty sure that they aren’t appreciating the melodic entertainment on offer!

Raindrops on roses – Even these couldn’t cheer Rachel up on Thursday morning! 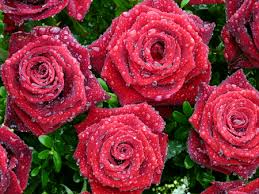 Perhaps I’m being over sensitive and am wrongly presuming my beloved daughters displeasure at my musical attempts to improve her spirits. When I drive her to work on Monday morning, I’ll retry the singing approach just to confirm I’m not misreading the situation.

I realize I’m probably painting Rachel as a moody, spoilt and unpleasant person in this particular narrative. She isn’t

As with my observations of the lollipop lady’s behaviour, they are written with tongue very firmly planted in cheek.

I’m very proud of and love my daughter. That is in spite of her being so high maintenance even raindrops on roses and whiskers on kittens cannot raise her enthusiasm levels on a morning!