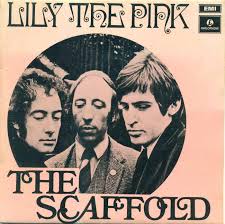 For reasons unbeknown to anyone but God and perhaps astrologer Russell Grant, I can’t get the 1968 song ‘Lily The Pink’ out of my head this morning.

The tongue in cheek song by comedy music group The Scaffold, a former UK chart topper, is currently playing on a constant loop in the capricious corridors of my mind.

Meanwhile, I sit in front of blank piece of A4 paper on my laptop hoping Russell Grant, or even God, will let me in on the secret. I need to rid myself of this unwanted distraction as I attempt to skilfully craft a monologue of erudition.

After all, creating a high quality narrative worthy of both God and Russell Grant’s approval isn’t easy; especially with a comedic 1960’s song looping in the background.

As opposed to concentrating on the job in hand, my neurological impulses are constantly telling me unwanted information, such as Jennifer Eccles having terrible freckles and Mr Frears having sticky out ears.

The Scaffold were a Liverpudlian trio comprised of Mike McGear, John Gorman and Roger McGough.

Mike McGear (real name Mike McCartney) took a stage name as he was keen not to gain success on the back of being the younger brother of Sir Paul McCartney.

I wanted to write that Roger McGough (pronounced McGoff) also changed from his birth name, which was Roger FuGough, to avoid any inappropriate interpretations of his moniker. However, as much as I’d love that to be the case, it isn’t true…….. Although, coming to think of it I have just written it anyway.

McGough was a Beat poet who, along with McGear and John Gorman, started The Scaffold in 1962. In addition to his poetry, McGough lists broadcasting, song lyrics and writing childrens books as his talents. As an aside he also listed eggs, milk, cheese and bread, however as that’s his shopping list I won’t overly dwell on that.

The group was made up by John Gorman. When I said made up I don’t mean the Liverpudlian meaning of ‘made up’, ie very happy. I’m referring to him completing the trio of performers in the band.

Like McGough, Gorman was a Beat poet. He was a sensitive man who claimed to have been made the outsider in the group because his surname didn’t start with Mc, which was vehemently refuted by band mates.

He toyed with changing to a stage name of John McCartney, claim he was Paul’s brother and bask in the reflective glory of being a sibling of The Beatles member. However, after a period of reflection, he decided that was a chuffing ludicrous idea, so wisely dropped it!

Gorman, who once famously told someone to f*ck off, was the brains of the outfit. I don’t mean he was the intelligent group member, I’m referring to the fact he was the puppet scientist in Thunderbirds! 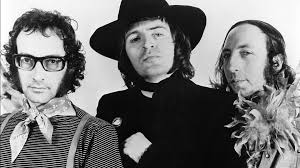 Despite only being five when ‘Lily The Pink’ was released (me, not John Gorman) I remember it as catchy and humourous song that, along with Leeds United’s two cup wins that year, contributed to a happy 1968. I also recall being similarly enamoured with The Scaffolds subsequent offering ‘Thank You Very Much’, released the following year.

I also recollect particularly liking the word efficacious, which was used in the chorus of ‘Lily The Pink’. I didn’t have a clue what it meant and, without Googling it, I’m not even 100% sure now (I think it means has curing powers). I just liked the word, much as now appreciating words like juxtaposition, epiphany and serendipity in adulthood.

As I write, the music in my head has just stopped and the 7” vinyl single has returned to its slot in my cranial jukebox. A calming silence has replaced the quirky song which, like a harridan gossiping over the fence, had spent the morning endlessly regurgitating that brother Tony was bony and Ebeneezer thought he was Julius Caesar.

In this prevailing peace, I now understand this record has been on repeat as an inspiration to pen a narrative about this 1960’s comedy group from Liverpool…… Thank you God and Russell Grant!

Oh, and Russell, as your in charge of the jukebox buttons, can you put something on by David Bowie next please?!