Over the past two evenings I’ve lit two chiminea fires. Occasions where I’d sat contentedly adjacent to the pyre, while warmth from the blaze warmed my short clad legs and cockles of my heart…… Or should that be warmed the heartles of my…….. Ok, ok, stop that right now, Strachan!

There’s fewer endorphin boosting redolences and views than those procured from firewood flames…… Well, as long as that conflagration isn’t an indoor timber sideboard self-combusting, or your shed laden with £1,000’s of equipment ablaze.

Our understanding of how to enkindle, proliferate and ordinarily control this most versatile, and potentially destructive, of natures gifts setting us apart from the animal kingdom. A fact Mowgli in Disney’s classic animation Jungle Book found to his cost, when his assumed secret endangered him; those threats from orangutang, tiger and boa constrictor.

The primate King Louie attempting to corral this mysterious process of combustion from the man cub through refrain. Lyrics which incorporated the following poesy:-

“…..Now don’t try to kid me, mancub
I made a deal with you
What I desire is man’s red fire
To make my dream come true
Give me the secret, mancub
Clue me what to do
Give me the power of man’s red flower
So I can be like you…. “

Sadly for Mowgers, he was only able reveal the ignition process involved Zippo lighter fluid. The vagueness of this revelation irking the orangutang, whose scorn necessitated the boys hasty evacuation from the scene by Baloo bear and Bagherra the panther. 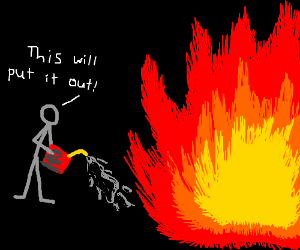 Talking of losing the plot, on I commencing this journal I’d no intention of affording topic space to Rudyard Kipling’s famed storyline of an abandoned Indian boy’s jungle antics. Certainly not to the extent of adding the fictional flannel surrounding the part Zippo lighters played in the tale.

Moreover, my initial objective was to inform of literal torrential rains on my parade; on both occasions just after I lit the chiminea, reducing its previously hypnotic flames to choking dispersed steam.

The cathartic brio consequential of my pyre sight and balm swiftly negated when, from the dry side of the French doors, witnessing this deluge’s disregard for the bonfire.

Trying to take a poetic snippet from these disappointing episodes, yours truly likened the events as a pretty decent metaphor for the fluctuating extremes experienced when troubled by mental health issues.

One minute bearing the swagger, verve and esprit consequential from life enhancing moments. The next enveloped with dark clouds appearing from nowhere; rendering one’s mood the polar opposite of moments prior.

You attempt to console yourself the fire will ignite again, however at this juncture are wracked with uncertainty and angst surrounding how swiftly the rain clouds dispel. Perhaps the lack of control and blindsiding of mood make this tougher to accept mentally than, say, expected fire ignition which maybe can be planned for to ease the mood transition.

Although, in these contemporary times of global pandemic and riots I suppose putting out a fire with water (unexpected or not) is preferable to the approach taken by some who seem determined to extinguish huge worldwide issues with gasoline!