Sunday 8th April – It was a fillip to see my brother Ian at the weekend. A Friday overnight stop at the abode in Gateshead he shares with his fiancée Ann.

Divided by 100 miles of the A1, it was fairly rare quality time I shared with my sibling. As always, occasions where he raises my spirits and I raise his weekly food bill.

Akin to one of mum and sister Helen’s many attributes, our Ian is a splendid host. The warmth he projected from the moment I crossed the threshold of his residential domain until exclaiming “Thank f*** you’re going!” 24 hours later at the train station, cathartically improved the low spirits I arrived in.

He and Anne cannot do enough to make you welcome in their home, with seemingly constant requests if I wanted a cuppa or something to eat. A great change from the experience of a visit to my in-laws (who don’t live far from Ian) whose warmth of greeting extends to ensuring the safety catch on their firearms is secure…. Or so they tell me, anyway!

Ian is my oldest and best friend. My buddy with the calming influence genetically bequeathed from our late father; the voice of reason that counters the capricious nature I inherit from mater. A loving, caring, selfless man who, like me and Helen, frequently puts the priorities of others above him on his existential odyssey.

Also like dad, my brother has small OCD issues. His need for cup mat symmetry on Ann’s and his rustic coffee table being a perfect example. Ordinarily, it’s a harmless enough tick, however the fact there’s occasionally a full cup of tea residing on the mat he’s adjusting does expose him to a scald risk. 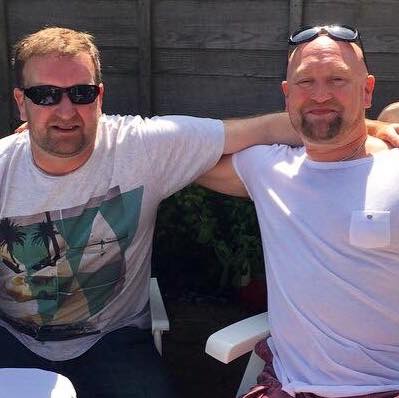 Symmetry seems to play a big part in our kid’s OCD. Like the Great Pyramids in Egypt, very precise longitude and latitude co-ordinates are used during construction work. Not only does his en-suite toilet roll holder point polar north, but the left corner of his cooker hood points directly westward to the Aletaster pub on Low Fell.

Last year he endeavoured to have the house he shares rebuilt so the houses eves pointed 100 miles polar south towards Elland Road, the home of his beloved Leeds United football club. However, fiancee Ann and the people in the semi next door told him to go bollocks!

Ann claims as he’s got older my brother’s OCD has become higher maintenance. Apparently, if his two slices of morning toast don’t pop with forensic synchronicity our kid goes to work in a right old mood. A huff that doesn’t abate until his pencil points have been sharpened to 2.876 mm, and the tea lady has serenaded him with the Egyptian national anthem.

Thankfully, I don’t sharing Ian’s OCD issues – Although I have many foibles of my own. Sadly, these stress inducing ticks can’t be resolved by precision pencil sharpening practises, or even a consequence of a co-worker singing me the national of a middle-eastern country.

Habits that drive me to distraction, which no matter how hard I try can’t desist from undertaking. For example, grinding my jaw; a thoroughly annoying foible that results in me exhibiting the extreme facial contortions of a champion gurner.

According to our kid, when I undertake the habit sitting in his living room armchair, my jaw sways from the north westerly entrance of Luigi’s Pizzeria in Deckham to the south easterly co-ordinates of the 3rd tee at Heworth golf club.

Right, I’m going to bring this to a close now as I’ve just scalded my left hand with tea. A consequence of foolishly attempting to improve the feng shui of the mat where the full mug was residing.