This morning, following cack-handedly spilling most of my coffee in the passenger foot well, I inadvertently stumbled upon an enticing new car air freshener.

I don’t think my accidental discovery will secure me investment backing on TV’s Dragons Den – However it certainly beats the aroma of kiddies vomit in the league table of car interior fragrances.

Everyone loves the smell of coffee, with the possible exception of the Garforth I Much Prefer Tea Association, who allegedly detest being downwind of percolating coffee beans.

The drinks bouquet attracts individuals like a sensory Pied Piper. A comfort blanket to the senses, which on first slurp renders it’s recipient to exclaim “Bloody hell, that’s hot!…. Hey barista, my mouth isn’t lined with chuffing asbestos, you slack get!” 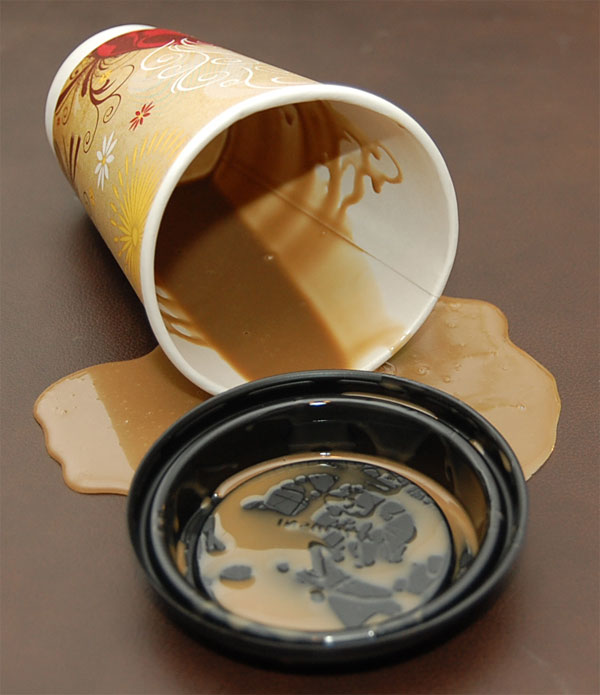 I recently read in the magazine Coffee and Bread Marketing Monthly, a percolating jug of coffee or freshly baked bread are ‘go to’ kitchen aromas when attempting to sell your home.

Be warned, though, it’s not a fool proof strategy. A friend once followed that recommendation and had no luck shifting his domicile. That being said, though, he sold his kitchen for £200,000, so it wasn’t all bad news for the lad.

I’ve never utilised coffee scent as an inducement to buy my house. When selling my last house I went for a harder hitting marketing strategy. When prospective buyers arrived for a viewing, I’d greet them donning a t-shirt adorning the words ‘Buy my house or I’ll kill myself!’

It took a while but this eccentric strategy worked in the end. Although the way Karen attempted to repel those interested I was amazed of it’s success…….. My missus must have liked the old house more than I realised.

The coffee scent that now graces my car interior will not be joined by the equally alluring aroma of newly baked bread. This decision taken after checking with a car dealership, and finding the prohibitive cost of having a bread oven installed in the vehicle.

Changing the topic somewhat, since my father’s passing in October I’ve been having darker humour epiphanies than previously. For example, I recently wrote of wanting to be cremated when I pass; with a caveat of burial if I can think of a funny epitaph, akin to ‘I told you I was ill’ which adorns Spike Milligan’s grave.

This morning, from within my neurological corridors the epitaph I sought manifested itself. For the quip to work, though, I’d still have to be cremated. With this in mind, tomorrow I’m going to have my last Will and Testament amended; specifying I want a plaque on my ashes urn saying ‘I told you the heating was on too high’.

Some may say that my Will change is inappropriate, distasteful and inappropriate. Incidentally, I’m aware I wrote inappropriate twice in the sentence above; that’s to encompass readers who think my comment is very inappropriate!

Today is the 20th December – I’ve six more blogs to pen after this to reach the milestone of 1000 narratives published on writesaidfred.org ; a landmark I’m hoping to achieve before the end of the year.

Recently I decided, following the completion of my 1000th offering I’m going to cease writing blogs, with a view to undertaking an alternative literary project in the new year.

I’m concluding this narrative at this point. I’ll leave you with a topical tune from Francis Albert Sinatra.