Christmas preparations continued apace in chez Strachan today, with my wife Karen provisionally booking a perennial visit by ghosts of Christmas past, present and future on Christmas Eve night. An annual occurrence deemed necessary by my missus for my redemption after a year of being less than chirpy.

Hopefully, when the spectres arrive bearing Christmas fear we won’t have a repeat of last year’s experience. A challenging occasion when the ghost of Christmas present whined endlessly about his awful yuletide journey to our domicile. In a bizarre role reversal, his child-like display resulted in me mentoring the ghoul at adjusting his behavioural traits.

Likewise, last yuletide the ghost of Christmas future (GCF) also displayed inappropriate working practise. He started with his usual self-righteousness, claiming if I didn’t rectify the error of my cynical ways, in the afterlife it’ll be too late for spiritual redemption.

Consequently, my soul would be damned in purgatory for eternity. A dreadful residence where, despite a spacious lounge/diner and central heating, I’d be subjected to the incessant jangling of Jacob Marley’s chains and the ghost of Christmas present (GCP) whinging about congestion on the M1. 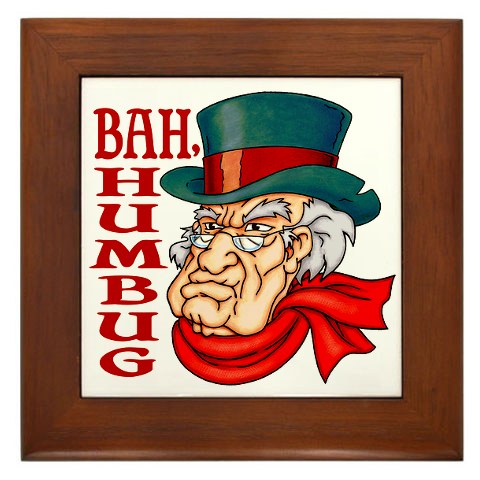 After delivering his damning advocacy, GCF then had the impudence to ask if he could borrow £5 until payday……. The cheeky get! Despite his lack of collateral and gloomy predictions for my future his advice about addressing my frugality hit a chord, so I acquiesced.

Karen wasn’t amused that, in the absence of £5, I pacified GCF with a £10 Boots voucher she’d received as a present from a friend. I’m unsure if there is a Boots store to redeem the voucher where the ghost of Christmas future resides; he does though seem happy enough with the gift.

In her displeasure, my spouse claimed her buddy (whose hobbies include stealing vouchers and staring at cell bars) would have to go out risking theft again to replace it…… Puzzlingly, the missus’ disenchantment led her to admonish me with “It’ll be your fault if she gets arrested and spends Christmas in a prison cell!”***

***  I’d like to clarify, Karen has no friends that steal or indulge in any sort of lawless activity (unless you count watching X-Factor as criminal). The words of whimsy above are merely the consequence of self-indulgence fiction on my part.

“What about your interactions with the ghost of Christmas past (GCPAST)?” I hear a woman in the village of Ainsley Scragg enquire.

Well to be honest, the GCPAST is always welcomed with open arms in chez Strachan. Her recollections of the warmth, love and laughter from fondly held Christmases of childhood, along with the similar ambience we replicated when my kids arrived on the scene, are always warmly received.

With the passing of my father in October, this year’s engagement with the ghost of Christmas past will be more poignant. The family and friends he’s left behind taking a rollercoaster ride of emotions when recalling festive seasons in the old man’s company.

Some people will muse that if the ghost of Christmas past brings nothing but fond recollections of existential yuletides, why is there a requirement for the other two ghosts to make an annual visit?

“Why the cynicism, Gary?…… And, more importantly, where the hell did you get those awful grey cheesecloth trousers, which make you look like you’ve swapped legs with Dumbo?!”

Unlike Ebenezer Scrooge, I’m guilty of occasionally forgetting newly found good traits following redemption. As a consequence, the ghosts who lead us into reflecting on our behaviour remain my perennial visitors, taunting, cadging money and whinging like hell about traffic congestion.