Despite my best intentions, I didn’t write a narrative yesterday. Unfortunately, I cannot express the full reasons behind this lack of Wednesday’s blog in one paragraph. So if you’re interested in the reason for yesterday’s literary absence stick with today’s narrative.

If you’re not interested I’d still recommend staying with this blog as at the end you’ll have the opportunity to win a week in Clecton. For those who haven’t heard of Clecton is like Clacton but with an ‘e’ instead of an ‘a’!

I did start writing a blog on Wednesday, however I foolishly elected to pen this monologue at my parent’s house. My misguided decision resulted in regular loss of focus and concentration due to a myriad of distractions.

Among those disturbances was the Olympic coverage booming on TV and my mum interrupting me to ask if I know any good jokes about ferrets.

I informed her I didn’t; opining she’d made things very awkward for herself by attempting to become the top ferret joke comedian in Yorkshire.

Refusing to deliver gags on any subject other than the domesticated European polecat has certainly made getting new joke material for her act challenging.

I recommended she google it, which may provide her with enough gags for a short stand up stint. However, I’m not anticipating to see my mater on the comedy show ‘Live at the Apollo’ any time soon.

Yours truly’s focus was also being tested by the intermittent cuckoo’ing sound emanating from over my left shoulder. The culprit of this avian interjection being the wooden resident of a cuckoo clock, which was recently purchased by my parents. 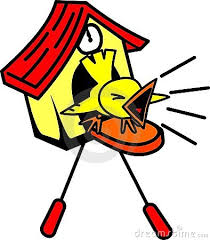 This ‘endearing’ new member of the family chooses to make his (or her) presence known every 15 minutes. I hesitate to speculate on the sex of the wooden cuckoo as I’m not curious or insane enough to check.

I’d guess the guy or woman (I’m not checking that either!) who lovingly carved the wooden replica of the nest thieving bird wouldn’t have given the inclusion of genitals much mind. I would imagine as a carver/sculptor avoiding genital inclusion is preferable whereever possible.

I’ve no idea or want to know what a bird’s penis looks like, however I suspect even carving the Ron Jeremy of the cuckoo world would be a task requiring a neurosurgeon’s accuracy.

Right, I’ve written far too long about the genitals of cuckoos for my liking, I’ll move on promptly.

I’ve just been interrupted again by my mum, who this time felt the need to convey to me that my car looked nice and clean. As she departed the dining room she then mystically proffered “I hope you’re not writing about cuckoo’s willy’s!”

I haven’t washed my car for a while so I’m assuming the heavy overnight rain fooled my mater into thinking I recently given my motor some TLC. I foolishly told her of my laxness re-my car care to which she responded “You lazy little bleeder!”

In the end I gave up writing yesterday as the interruptions and noises were just too distracting. Even the slight clicking of the pendulum at the base of cuckoo clock was irritating me, as my ears went into hyper-sensitivity mode.

At least I’m assuming it was the pendulum and not that I’d got it complete wrong about the size of cuckoo’s willy’s!

Incidentally, the chance to win a week in Clecton was a lie! 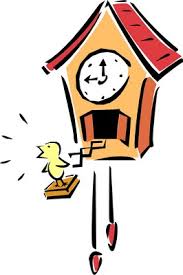