As I write, the unforgiving heat propagates beads of perspiration on my troubled brow, on this scorching East Leeds morning. Unfortunately, I seek inspiration not perspiration whilst sitting unshaven in my trilby at our underused rattan patio table.

I catch a sight of my reflection on the outside of my kitchen window. The face staring back at me exhibits the look of an unshaven bloke in a trilby seeking inspiration not perspiration…… They say a camera never lies; well it appears kitchen windows don’t either!

The reflection displays me an unhealthy looking white of pallor. This the result of my earlier erratic application of Ambre Solaire* factor 20, which has rendered me with a ghostly visage.

(*       Other sun screen manufacturers are available. Although, avoid the old wives tale of using honey as I doesn’t protect from the sun and may result in multiple bee and wasp stings!) 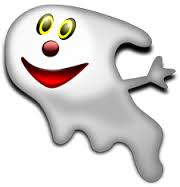 Despite my look to the contrary, I comfort myself with the theory that I can’t be a ghost as I’m casting a reflection. As far as I know ghosts don’t cast reflections in mirrors or windows. Or so I was taught as a child in the Ladybird book of Ghost Reflections.

This book provided a mild introduction to the supernatural in my youth. It told of days of yore when people thought mirrors were the portal used by the afterlife for their return to the living world. Folklore dictated that the reflective room furniture bore major spiritual significance.

It is said there had been many sightings of ghouls returning to carry out mischief, take revenge on their nemesis’ and cancel furniture purchases before the 14 day cool off period expired….. Apart from the mirrors, which they couldn’t return as they were needed as their portal back.

I’d like to clarify that I’m not mocking people who believe in ghosts or the afterlife. I’m open minded about stuff that hasn’t been proved either way.

I don’t know what happens after we pass from this mortal coil. If I did I wouldn’t be sat here unshaven in my trilby, seeking inspiration instead of perspiration to write this inane narrative.

No. I’d be sat here unshaven in my trilby, with inspiration instead of perspiration writing an inane book on what happens after we pop off this mortal coil.

I should really ask Karen’s mum what happens. She has been to see a spiritualist and could no doubt shed light on the goings on at such meetings.

I’m not going into details as she has no recourse to defend herself, however her visit ended up de-stabilising a long standing friendship of mine.

My mantra is that people can believe in spiritualism, the after life or whatever the hell they want. However, if they start mischief making on the back of knowledge acquired it is bang out of order.

Anyway, that’s enough of my bitterness! I love her like the obnoxious mother I never had!

I’ve just caught sight of my reflection in the kitchen window again. I’m happy to report that my façade is no longer all white; meaning my ghoulish appearance is diminishing.

Unfortunately, though, I don’t look any less scary as the sweat manifesting from my brow has amalgamated unusually with the sun screen. My face has the look of a prosthetic mask. A latex visage melting gradually before my eyes in this unforgiving calefaction.

I’m going to give my face some respite from the sultry climatic conditions, grab an ice lolly and mull over what bitterness I can impart tomorrow!

Karen has just walked out of the back door of the house carrying several carrier bags following her visit to our local supermarket.

On seeing me, she announced that I looked like an unshaven troubled man in a trilby seeking inspiration not perspiration. I gave her kudos for her observational skills;  concurring that her sentiments were not too far wide of the mark.

She then opened one of the carriers and threw me bottles of deodorant, shaving foam and a razor, before telling me “There you are. That’ll solve two of your problems!”

Oh, I have one last question. Does my penning of a narrative about spirits and ghouls make me a ghost writer?……….. No, I thought not!