Yesterday, as we ventured into the second half of 2016, this seemingly cheerless year hit us with further sad news, with the announcement of the passing of writer/actress Caroline Aherne, at the age of 52. 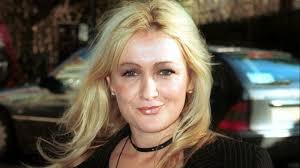 The dismal news was confirmation that the Grim Reaper hadn’t yet finished his 2016 objective of robbing the entertainment world of more creative icons.

His (if it is a bloke) spiteful project has deprived us of the likes of David Bowie, Prince, Ronnie Corbett, Alan Rickman, Victoria Wood, Paul Daniels and now Ms Aherne, in a lugubrious last six months.

Add to their loss, the 2016 passing of sporting legends like Muhammad Ali and Johan Cruyff, several mass terrorist casualties, political chaos in the US and a now splintered UK/Europe, this year will definitely be one to be consigned to Orwell’s Room 101.

From a personal perspective, the announcement of Caroline Aherne’s death possibly made me feel the most melancholic of all of the star losses. As co-writer of The Royle Family she, along with Craig Cash, in my opinion produced the TV best UK sitcom in the past 20 years.

The quality of humour in their scripts, delivered with great skill by Ricky Tomlinson, Sue Johnstone, Ralph Little and themselves, turned their names into a writing ‘brand’ viewers wanted to engage with.

I realise the paragraph above probably sounds like pretentious bullshit; and it may well be. What I’m trying to convey, though, is that after the standout writing of The Royle Family meant a TV station could increase viewers by selling subsequent shows as ‘written by Caroline Aherne and Craig Cash’……. Ok then, it is pretentious bullshit!

Regardless, her portrayal as the bone idle Denise Royle took indolence to a new level. A marker that was only bettered by her equally lazy father Jim.

Denise, whose signature dish was Dairylea on toast and whose buffets consisted of crisps, seemed more interested maintaining a hatred of her hubby’s ex-girlfriend Beverley Macker than cooking him a decent meal. 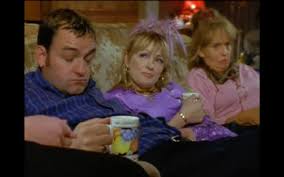 “What was it that first attracted you to millionaire Paul Daniels?” to his wife Debbie McGee.

“You were a right old slapper in the seventies, weren’t you?” to feminist Germaine Greer.

“You are racist, aren’t you Bernard?” to controversial late comedian Bernard Manning. (Incidentally, he wasn’t dead then).

“Is it lovely being up this late?” to a youthful Ant & Dec.

Just some of the potentially inflammatory questions Caroline Aherne deigned to ask as her character the elderly Mrs Merton, in the mid 1990’s spoof chat show of the same name.

Protected by the impunity that comes with her character being a naïve elderly woman, Mrs Merton gave Aherne the opportunity to ask celebrities the questions no other chat show host could. Most of them laughed it off like late footballer George Best, of who Mrs Merton asked:-

“You were a Sixties sensation weren’t you? You know all that marvellous football you played and then of course all the booze. Did you ever think if you hadn’t done all that running around playing football, would you have been as thirsty?”

However, not all celebrities seemed to get the joke. For instance the staid boxer Chris Eubank seemed bemused by the geriatric lady asking him:-

“Chris were you surprised, like we all were, when Steve Collins came up behind you and licked you in the ring?” 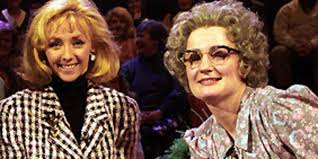 Away from the success, Caroline Aherne faced several tough challenges, including three separate fights with cancer, along with long bouts of depression.

Wringing laughter out of the pain, using it as a viable supplement to therapy is a strategy used by many great creative people. Geniuses such as Stephen Fry, Spike Milligan, Woody Allen and my butcher Frank (with his pork pie juggling act) are just some of the entertainers who’ve adopted this approach in the past.

Did Ms Aherne adopt the same approach to positively channel her pain into making us laugh. I’ve no idea but I suspect at some point this strategy came to pass.

What first attracted me to the very funny Caroline Aherne? ….. That’s easy, my inaugural sight of her as Mrs Merton in the mid 90’s, which she followed with the brilliant The Royle Family.

As I write Paul Daniels, Bernard Manning and George Best will no doubt be up there quaking in their boots in the event they bump into Mrs Merton again…….. Although, I suspect Bernard would have been turned away at the doors!