I commenced this monologue on Friday afternoon on a train bound for the Lake District. My ultimate destination was the town of Ambleside for a weekend away with the lads.

The grey West Yorkshire skies with its blanket covering of Nimbostratus clouds, had hinted at precipitation all morning. Thankfully, though, they abstained from subjecting me to its watery excesses prior to departure.

Only time would tell if the Cumbrian skies would be as accommodating. Perhaps we may even by spoiled by the appearance of the large warm yellow circle in the sky……… That’s the sun by the way not a Teletubby hot air balloon.

Blimey, that last paragraph hardly shifted this narrative to new platitude of interestingness!

I lazily resorted to a tenuous rhyming link between the words ‘pronto’ and ‘Tonto’, in shoddy attempt to raise the literary worthiness of this tome……. Chuffing hell, I was struggling for inspiration at that point!

As I sat in the carriage I gave myself a talking to. “Come on Gary, sort yourself out!…. After all you’re passing through the Pennine Hills, which includes inspiring rock formations created during the Ice Age.”

At this time, to try alleviate the writers block,  I decided to write about what first caught my eye as I looked out of the carriage window.

In the movie ‘The Sound of Music’, Julie Andrews’ character informed the Von Trapp children that when she had writer’s block she sang about her favourite things…… Actually, she really advocated that solution when feeling down not to resolve writer’s block. However, I thought was worth giving it a try anyway!

So perched in seat B2, I commenced a slightly self conscious version of “Raindrops on roses and whiskers on kittens. Bright copper kettles and….”

Unfortunately, despite my best endeavours, the guard wasn’t impressed. Resulting in him asking me to leave the train at the next stop!!……. Surely my singing voice isn’t that bad!

Well not everyone thought so. The train guard may not have appreciated it, however, as I left the train at Stalybridge an Austrian passenger offered me the job of nanny to his seven kids!

On my next train, I wasn’t plagued by writer’s block perhaps singing about my favourite things is a valid solution after all!

However, it was hard to concentrate on the matter in hand due to a cacophonous phone call, by a guy whose voice reverberated around the carriage like a mastodon with a megaphone!

If you can’t imagine the volume of his voice from that description, think of a woodpecker in a biscuit tin!

If that doesn’t help then just think of something really bloody loud!……. It was like that!

If you’re still struggling to picture the audibility of this guys call after that, I’m afraid you’re on your own!

Anyway, the Liverpudlian fellow passenger’s conversation was at such a level the he shared the I depth details of a female friends divorce settlement with the rest of the carriage….. How do I know it was a female friend he was engaging with?…… An assumption I made from him addressing her as Geraldine.

With regards the divorce settlement, its sounds as though Geraldine is milking Trevor (I assume her estranged husband) dry!…… She’s getting the house, the Jag and half of everything else!

Come on Trevor stand up to her! Are you a man or mouse?

I pulled into Windermere station at around 4pm (well the train did anyway). I was picked up by a taxi driver mate here, who is also on the lads break.

It was good to see him and the other lads, although I wasn’t enamoured that he charged me £20 for a 5 mile journey’, the tight get!

Right, I’m off to watch the Australia v England rugby game!……. And think on Trevor, stop acquiescing to Geraldine’s every whim. 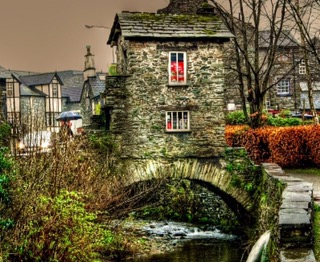