Today is Karen’s second hospital appointment of the week; on this occasion for the receipt of ongoing monthly treatment.

After over five years, she’s become so familiar to receptionists and nurses, they greet my spouse by first name…….. Or they would if her name was Arnold. Seriously though, the engaging manner of nursing staff at Leeds St James’ oncology unit have been a great source of comfort and reassurance to my brave missus.

As I write, Karen is sitting next to me on a sofa playing solitaire on her phone. I hope she finishes the game soon as we need to get the heck out of the furniture department at Debenhams and to the hospital pronto.

In the 1975, US singer/songwriter Neil Sedaka released a song called Solitaire in which he proffered that solitaire was the only game in town.

These days, technological advancements ensure Karen has far greater gaming options at her disposal. According to my missus, her phone also allows the playing of ‘Angry Birds’, ‘Tetrus’ and ‘Pin the Tail on the Honky’

I think she meant ‘Pin The Tail on the Donkey’ when talking about the latter…… I strongly suspect there isn’t a politically incorrect electronic game with a goal of pinning a tail on a Caucasian male in 1970’s Harlem.

I personally find no fulfillment in playing electronic games, be that on phone, X-Box, Playstation or the Babbage Oscillating Interface. My preference laying with old school family pastimes, such as games of ‘Where’s My Slippers?’ and ‘Where’s My Hat’,

‘Where’s My Slippers?’ and ‘Where’s My Hat?’ have been passed down through the family for generations. For the uninitiated, their formats are very similar to that of ‘Hide & Seek’. The only difference being the aim is to find your slippers or hat instead of people.

They are old fashioned games, but the family enjoy them and we find it contributes towards maintaining a cordial home environment…… Well, apart from the time we disqualified my son for finding the slippers when we were playing ‘Where’s My Hat’, when all hell broke loose.

Currently I’m looking out of the window of this 3rd floor waiting room in the Bexley Wing at St James Hospital in Leeds. Presently, there is little to get my creative juices flowing – Wordsworth certainly made the correct call when he chose the Lake District over the Burmantofts area of Leeds to inspire his prose.

Something that does stand out in my panoramic view from this lofty perch, is a couple of grey buildings maybe a mile away. I’m not sure if these grey rectangular structures are offices or residential properties, and ordinarily they wouldn’t be worthy of mention.

The aesthetically displeasing structure only catching my eye due to luminous yellow segments of its facade. A design that make it look as though someone has decorated it with a highlighter pen. 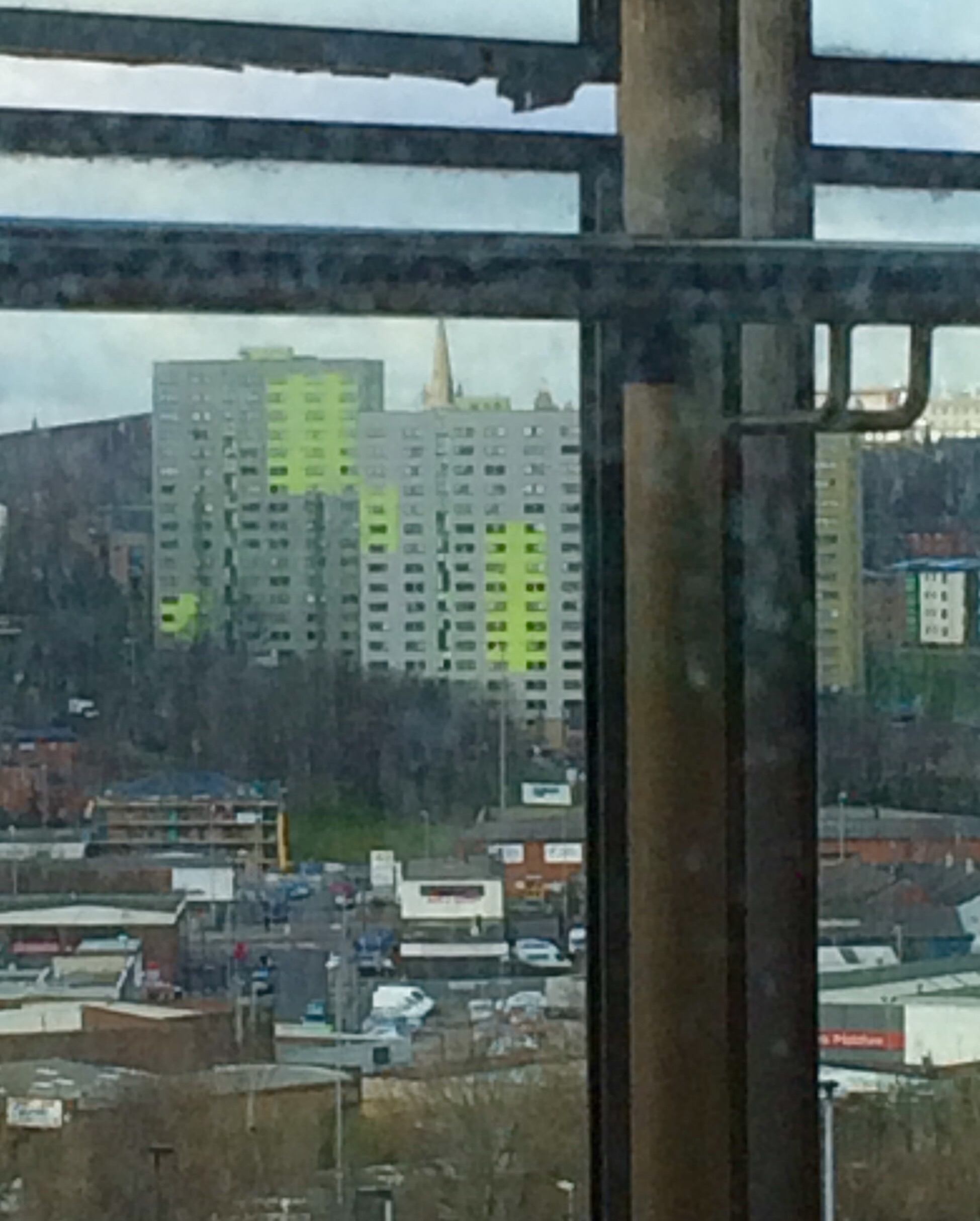 As it would have been too onerous task for the builders to undertake, I’m assuming the construction didn’t incorporate the decorating of the rendering by highlighter pen.

Unless of course they had a giant highlighter pen, but if that were the case the logistics of lifting said pen would raise an altogether different conundrum.

All being said, I can’t deny the unusual design makes this 40-50 year old property stand out. Catching sight of the highlighter pen like decor set me pondering. Thoughts of which other stationery supplies would inspire innovative architectural additions to building design.

A massive metal paperclip perhaps, tippex based rendering or even a bloody big notice board with giant coloured pins.

Despite these ideas sounding foolish, is it any dafter than having a structure looking like it’s adorned by highlighter pen?

If any architects are reading this, my north east based solicitors Haddaway & Ballicks have been instructed to watch for plagiarism of my ideas without suitable recompense to yours truly……… Oh you won’t be!…… Fair enough.