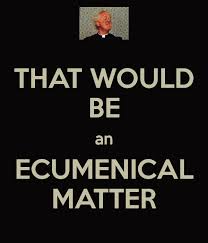 “How did that gobshite get on the TV?” is probably a question most people have uttered about someone or other while getting their daily fix of the goggle box.

On the occasion it was uttered by a normally incomprehensible whisky soaked priest from his well-worn armchair, the target of the addled old man’s barbed question was a young simple minded colleague, fair of hair and vacant of expression.

Taking a brief respite from drinking and retrieving his spectacles stolen by crows, it was a comment from lewd alcoholic Father Jack Hackett, in an episode of the Channel 4 comedy Father Ted.

It was aimed at Father Dougal McGuire, who’d confused him into thinking he was on the telly by placing the frame of a TV screen around his head.

For very different reasons the words of “How did that gobshite get on the TV?”, penned by Graham Lineham and Arthur Mathews, is a comment that has sprung to my mind twice in the last 24 hours.

The first occasion was yesterday when I heard that the actor Frank Kelly, who played Father Jack, had passed away at that age of 77. The veteran artist had been fighting Parkinson’s disease.

Secondly, the same comment sprang to mind this morning when I saw Piers Morgan presenting on breakfast TV! 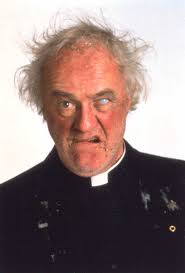 Father Jack Hackett had fewer scenes and fewest lines of the three priests, resident in the parochial house on Craggy Island. However, his sparse vocal input was, in some ways, as memorable as that written for Father McGuire (Ardal O’Hanlon) and Father Ted Crilly (Dermot Morgan).

Although the words ‘Feck’, ‘Arse’, ‘Girls’ and ‘Drink’ were about the limit of his vocabulary, they added intrinsically to the comedic value of the sitcom.

Opticians mused over whether Father Jack required spectacles after he read to the bottom of the chart at his last sight test! 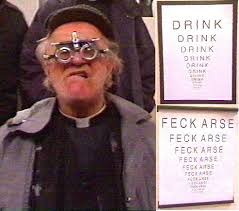 The only occasion I recall Father Hackett straying from those four mercurial words was in an episode when the pugnacious Bishop Brennan was scheduled to visit.

Due to concerns about Jack’s inappropriate vocabulary, Father Ted tried encouraging him to use the catch all response of “That would be an ecumenical matter!” to every question he would be posed!

Ted, working on the premise that it was such a vague answer that it would cover a multitude of religious queries, thought it was the only way to hide his colleague’s deeply unreligious behavioural habits from the bishop. 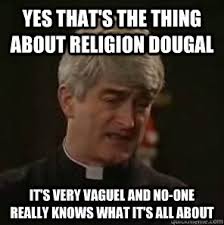 Despite Father Ted’s plan being only a ‘partial success’, Father Jack kept his role as a one of the island’s priests. Not that he knew much about it, as he was sat asleep slavering onto his already grubby clerical tunic.

Father Jack was described by Ted and Dougal in one episode as: “Mid-50s to mid-80s. Tremendous smell of vegetables off him. Angry man, very angry. Hates children. Likes a drink.”

An impressively descriptive and accurate portrayal of their colleague, although I can’t honestly vouch for the vegetable smell. I’d add to that, it just about sums up nearly every bloke I know over 50! 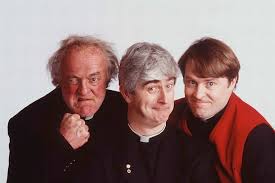 Although predominantly known for his role in Father Ted, Frank Kelly played many other roles, including in the original Italian Job movie in 1969.

Unfortunately for him, it was only a small uncredited role as a prison officer and he didn’t get the chance to “blow the bloody doors off!”……. There’s a gag somewhere about the late Jim Morrison’s band and a groupie, but I’m not going there!

By amazing coincidence Frank Kelly’s death fell on the exact same date (28th February) as Dermot Morgan who played the eponymous role in Father Ted; who died 18 years ago on that day.

Following his sad demise, will Father Jack Hackett be traveling business class to heaven with a bottle of single malt and a packet of cigs, where he’ll hopefully find all the pairs of specs stolen by crows?

Or will his misdemeanours mean a trip below to see the cloven hooved one?

I guess the answer to that is: “That would be an ecumenical matter!”