I’ve just dropped Karen off for her penultimate ‘Hope’ session at the MacMillan Cancer Centre, St James Hospital in Leeds. This is a course centring on coping with the psychological element of living with her rancid, unwanted yet immovable intruder.………… That’s cancer by the way, not me! …………… The course for that is on a Tuesday.

I was pleased she has at last recognised the need to introduce this element into her coping strategy, as she hasn’t acknowledged a need for support in that area since her diagnosis.

To clarify, from a physical perspective she has dealt with everything thrown at her by this risible disease with courage, fight and spirit. Regardless of what treatment she’s received, her mantra has been to contend with it without ‘making a song and dance’.

From a mental coping side, she has employed a strategy of almost denial whilst contending with her nemesis.……….. That’s not me again, by the way!

Unlike my share portfolio, that approach has generally paid dividends. This helped with Karen, the kids and I dealing with the intruder that will now always taint our lives.

Recently, though, it’s become clear to me that her successful coping strategy for the psychological side of things has shown signs of cracking. I believed this needed addressing before it splintered further and cause her even more emotional pain. Hence my delight she was partaking in the hopefully cathartic MacMillan ‘Hope’ course.

When I say there has been cracks appearing, I’m talking about her displaying little signs of discontentment. Clues to this were subtle behavioural changes, such as increased irritability and anxiety. Not to mention appearing to dislike me singing the ‘Good Morning to Karen!’ song to her at the start of every day.

I wrote the ‘Good Morning to Karen!’ song a few weeks back. Luckily she was called Karen, otherwise it wouldn’t have worked so well as a show of affection. For example, if she was called Sue, she would question who Karen was, raising unwanted and unnecessary questions!

The song involves me singing ‘Good Morning to Karen!” repeatedly for 5 minutes over breakfast, to the tune of “Happy Birthday to You!” ……….. You can’t expect me to write an original accompanying score when I’ve spent so much time on the lyrics now, can you!

The actual sheet music for my lyrical masterpiece

I generally find writing lyrics hard as I’m not really that poetic. However, as you can see, with this song the words flowed freely from the recesses of my mind.

My brother Ian is a far better lyricist and has written many songs over the years. Some aren’t the most cheerful ballads, but he makes a few quid from the makers of Prozac for contributing to their sales booms, whenever he writes a new melancholic number.

Seriously, though, he is a far more sensitive, caring soul than his elder brother and his lyrics paint a full and glorious picture on the canvas of his life.

He is particularly adept at portraying emotion through his difficult times. A ballad he penned about the time he ran out of Pinot Grigio, in November 2008, laid bare the very soul of a man in torment.

I know my song needs a bit of work, however I was really quite taken aback by Karen screaming “For gods sake will you stop singing that!”, when I greeted her at the breakfast table the other morning.

For my low maintenance spouse to react like that showed her mind was even more troubled than I’d previously realised. I initially pondered whether the root cause of it all was she didn’t like the song. However, I soon dismissed that as it’s bloody great, so it couldn’t possibly be that!

However, in the remote chance she did find it a tad annoying, I changed the lyrics of the song to “Joyous Morning to Karen!”. When I greeted her with that the following day, she didn’t speak, she just stood up and threw a packet of Crunchy Nut Cornflakes over me……… Followed by a jug of milk!

If nothing else, it proved her change in behaviour wasn’t down to my song. No matter what the lyrics were she was in a low mood, so they couldn’t possibly have been the culprit.

As a result, I’ve concluded her apparent display of aggression, by throwing cereals over me, may just have been the result of running out of bowls; not a show of anger at all.

Right, I best go as I have to pick my little Mrs up from her ‘Hope’ session. She will be nicely relaxed now, so hopefully won’t react badly when I sing the lament ‘Happy Homeward Journey to Karen!’ on the drive home.

The song will be available in good music stores and on iTunes from next week! 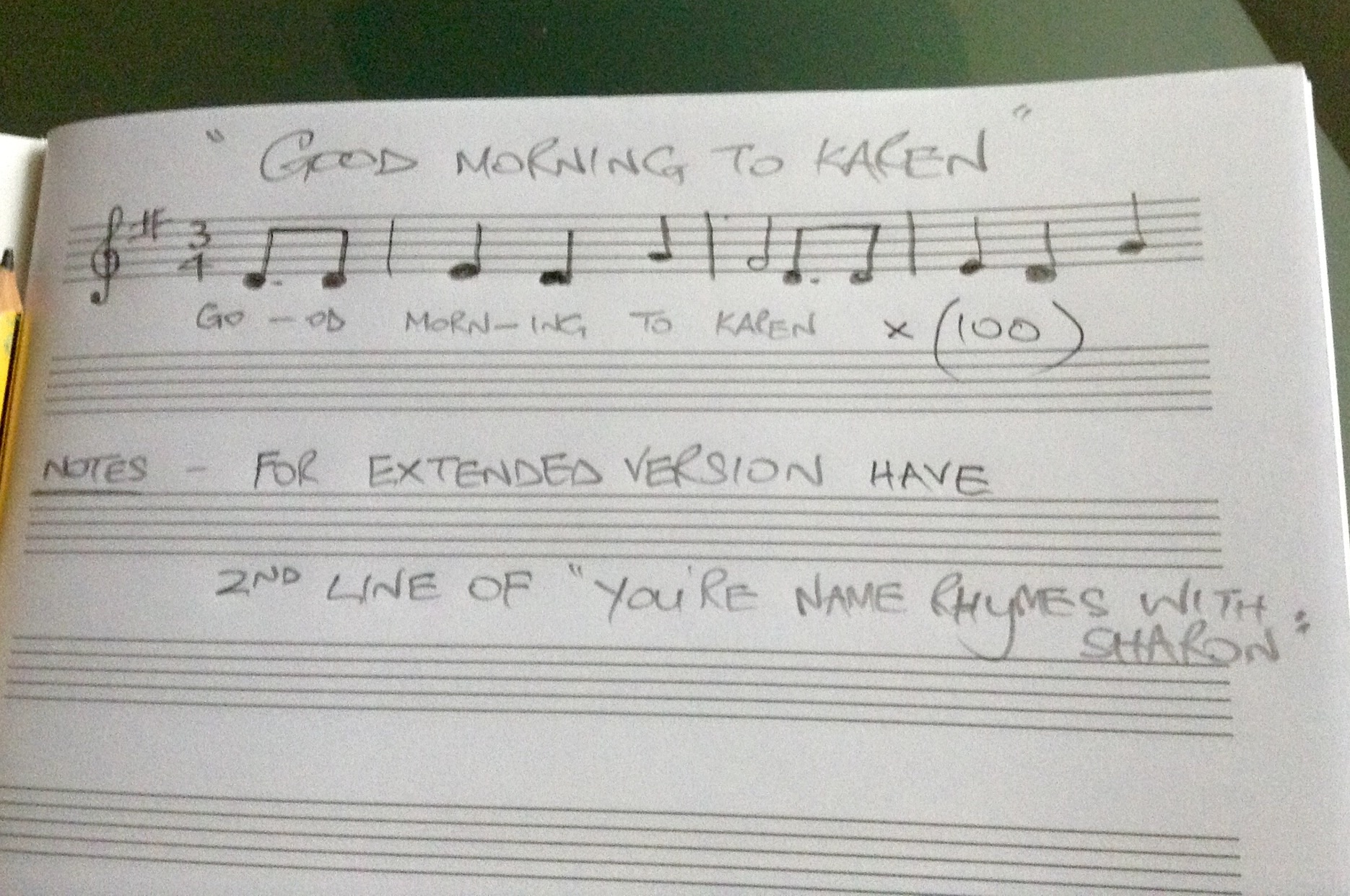