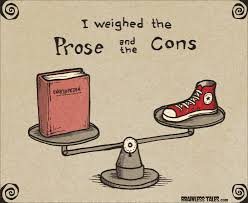 While sat this morning in front of a blank Word document seeking inspiration, I felt the terrible need for a sugar kick. As I walked into the kitchen to seek to solve this craving, I passed on this information on to Karen.

Unfortunately, she misheard it as “I need a kick”, so she stopped embalming the red mullet she got for tea and hoofed me up the ass.

I’m not sure why she was embalming a red mullet! I’m assuming it was something she’d read in the ‘Recipes for Taxidermists’ book I recently bought her!

Nursing my recently kicked posterior, I looked in the cupboard where we keep sweets (if we have any) and biscuits. The first items that caught my eye were a couple of fig rolls. They had fallen out of their packet and had obviously seen better days……….. Probably around the signing of the Magna Carta in 1066 by the bloody look of them!

There were a few other biscuits and crumbs in the adjacent biscuit tin. However, as I have a rule that if you don’t know what your eating give it a miss, I passed on the opportunity of replenishing my sugar levels with such questionable delicacies.

I rummaged further in the cupboard, where I happened upon a Christmas list from 1997 and something that was probably edible at one time, but now resembled a prosthetic nose.

I was dumbfounded by what I was uncovering in this cupboard, especially, according to the list, the news that at Christmas 1997 I’d asked for the gift of a Tony Blair soap on a rope!

Just as I was about to resign myself to having to forgo a confectionery boost, I stumbled upon a small Tupperware box right at the back. It was hidden behind a discarded toothbrush that had half a fruit gum attached to its bristles. I bore it in mind for if I get that desperate!

I clasped the box firmly in one hand, placed it on the kitchen bench and, like an excited puppy, hurriedly attempted to open the lid. My over eagerness to get into the tightly secured box, of about 8 inches square, was a particularly ham fisted affair.

It wasn’t helped by being distracted by Karen playing a drum roll to accompany the attempted box opening …….. God knows where she got the drum from!

Eventually, I managed to jemmy the lid off with a drum stick I snatched for my diminutive Mrs!

The contents of the Tupperware box were now free. Their escape lacked the drama of Steve McQueen’s gaining his liberty by motorbike in the movie The Great Escape. However, now they were now free to roam as they pleased! Until I ate them of course!

The fact they were free range would help ease my troubled conscience about consuming them!

As I looked down into the exposed box, I was greeted with the sight of a packets of sherbet sweets called ‘Love Hearts’ and a couple of boiled sweet lollipops. 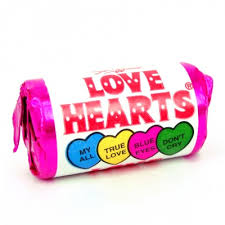 After a discussion with Karen, the consensus of opinion was that the contents of this box were left overs from Halloween! We weren’t sure which Halloween, but needs must and all that!

I snatched a packet of ‘Love Hearts’, put the lid back on the Tupperware box and returned into the living room, where my laptop resided, with my glass of water.

I sat back in front of my blank sheet at my desk. I took a sip of water before placing the glass on the yellow ‘Bovril’ coaster on the table, before unwrapping my newly acquired packet of sherbet sweets. 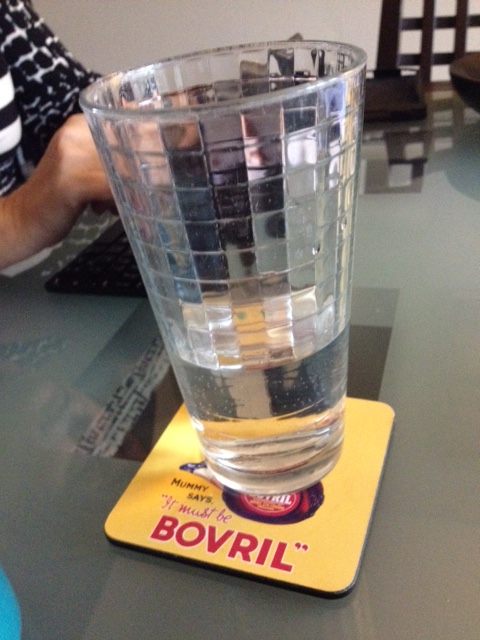 For those who don’t know, ‘Love Hearts’ are sweets that resemble the size and shape of ant-acid tablets. On one of the sides of the sweet, is emblazoned little messages to relay to your partner, to show what they mean to you and make them feel special.

I couldn’t believe how realistic these messages were and how many of them Karen or I had utilised over the years! A good sign that romance wasn’t dead after over 27 years marriage.

I’m talking about romantic soliloquies designed to move the stoniest of hearts. Utterances that once relayed to your love they are rendered defenceless to your advances. Prose of sensitive, selfless, caring words that melt the heart of your intended. Poetry so powerful you might even be allowed to watch the ‘Match of the Day’ rerun in bed on Sunday morning by its very use!

Emblazoned on the surface of the candy are messages of such emotionand eloquence its as though they were the work of the Bard himself!

I thoughtfully handpicked sweets with a message that I felt most apt to the status of our long standing marriage.

When she entered the living room, a few minutes after picking her candy, I handed her the message laden confectionery.  Her face was a picture when I handed her the sweets. She didn’t speak but was so overcome with emotion she wept and ran upstairs without a word!

I underestimated the power of these candy based soliloquies! “Empty the Dishwasher”, “What time does Tesco shut?”, “I’ll do it later!” and “Have You Seen My slippers?”certainly seemed to move my spouse!

“You smooth talking sod, Gary!” I thought to myself, while exhibiting a self satisfied grin. I’d obviously touched Karen’s heart with my smooth talking eloquence. 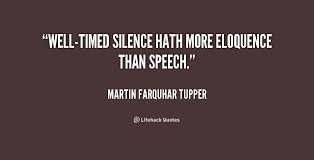 After Karen vacated the room, I ate the remaining two candies, as they were appropriate to give Karen and I didn’t want to appear crass, thoughtless and vulgar!

My sweets were adorned with the questions “Why have you not eaten me by now? Halloween was f***ing ages ago!” and “Do you want a soap on a rope for Xmas again?”

Anyway, my ‘Love Hearts’ have now been consumed and Karen sounds as though she is getting a case out of the loft, for some reason. When I’m finished this I best go check why!

Right, I’ve had my sugar kick! Now what can I write about today?!