I’ve a few days of decorating to ‘look forward to’ next week.

Put off by the upheaval caused from the necessity of emptying rooms of bric-a-brac, not to mention lugging around heavy furniture along with the decorating itself, it’s a chore disliked by many.

Many decry it as a cumbersome task, avoiding it like the plague due its tedious nature. In particular, the forensic precision required while undertaking the time-consuming element of ‘cutting in’ the corners with an emulsion laden brush.

Although not undertaking this home improvement work as regularly as I did in my 30’s and 40’s (when I tended to decorate two rooms a year), it not a chore that ordinarily fazes me. With cousins on both sides of my family plying their trade in the decoration game, perhaps not minding undertaking this type of labour is a consequence of genes.

Some may opine “If you’ve got so many decorators in the family, why not get one of them to do it? – You chuffing idiot, Gary!” An observation that isn’t completely without foundation. Mulling it over, I suppose the reason I tend to undertake the job myself is simply that I find it gratifying to see a room I’ve just freshly painted.

It’s not unknown for me, after clearing up and washing the brushes, to stand at the jobs conclusion with a well earned beer admiring my handiwork with emulsion and gloss. Raw materials bequeathed to us for small recompense by the god of DIY, Micky ‘The Masking Tape’ Magnolia.***

I find it heart-warming to witness the room re-invigorated now the walls adorn Dulux’s ‘Majestic Rhubarb’ matt emulsion (other paint colours are available), along with the chaste brilliant white gloss on the woodwork. With the chamber looking clean and re-vitalised, in between large sips from a cold bottle of Birra Moretti, I experience the juxtapose warm glow from my achievement.

Akin to a paint roller taking onboard Dulux’s ‘Majestic Rhubarb’, I like to absorb this aesthetically pleasing sight. Only leaving the newly made over room if I run out of beer, or start to feel faint from excessive exposure to gloss fumes.

I’ve learned it’s important I don’t overdo the beer consumption. This a consequence of the occasion I’d over-imbibed where I found myself admiring the paintwork of a room I’d not decorated for two years. I was embarrassed at being such a klutz, however on the plus side at least on this occasion I hadn’t exposed myself to black-out inducing gloss vapours. 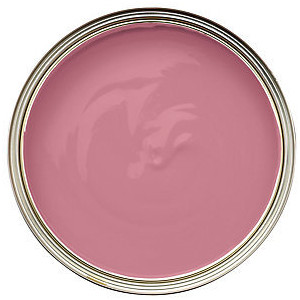 One of my dad’s cousin’s Steve is still plying his trade with brush and roller in his 60’s. His dad, my great uncle George, was also a decorator. According to family folklore, George was as big a joker as his brother (my granddad Jack).

Legend has it that one working day, in retribution for one of his workers drinking the previous day’s bottle of milk (which the team of painters used to infuse their mid-morning cuppa) he filled the empty bottle with white emulsion. After tipping off everyone but the milk thief, they watched in amusement as the culprit (thinking it was milk) drank a mouthful of emulsion from the bottle.

I’m unsure if the story is genuine, but if George was anything like my granddad Jack it probably was. Equally, if it was true, I’m unaware as to the milk pilferers well-being after imbibing emulsion paint. Hopefully, though, he didn’t suffer any long term medical issues from being the victim of my great uncle George’s prank.

*** – Despite having a name that may contradict the theory, Micky ‘The Masking Tape’ Magnolia has, as far as I’m aware, no links to the criminal underworld. He is merely a purveyor of cheap decorating materials and current holder of the title ‘West Yorkshire’s Crapist Nickname’.