I’m not the sort of guy who can knock up a nutritious, low fat, healthy and low cost meal with a lobster, a tub of creosote, anchovies and seasoning…… Well it would be low cost if you caught your own lobster; otherwise you’d need a second mortgage!

I have to say, if I was given those ingredients to create a culinary gem on TV’s Masterchef I’d immediately bin the creosote and the anchovies. Leaving me to create a simple homard avec assaisonement (lobster with seasoning).

I’m not picky with my grub, but I hate the over salty taste of anchovies so they’d be immediately discarded. I’d do the same with the creosote as I’m reticent to include any type of fence preservative in my recipes. Especially, the cheaper end preservatives like creosote!

Mr Creosote from Monty Python’s movie ‘The Meaning of Life’ I’m not sure if Masterchef hosts Jon Torode or Greg Wallace allow the omission of ingredients, but if they don’t then it would serve them right when they tasted my completed creosote marinated lobster and anchovy surprise.

I can cook and do so regularly. However, although my meals are generally perfectly palatable, I’d be the first to admit that my culinary repertoire isn’t extensive.

My dad Mally and brother Ian are both good cooks who will experiment with their menus to expand their aptitudes culinaires (as the French would call it). The Luddite in me ensures I play it safe with my cuisine, which generally means ‘old school’ offerings from yours truly.

Amongst his repertoire, Mally makes a mean coq au vin, along with an exceptional pork and cider dish from scratch. Our Ian similarly embraces my dad’s reticence to utilise jarred sauces to enhance his meal and is a big advocate of utilising chickpeas in his cooking.

There are times, though, it is good to let a person carry out culinary experimentation. For example, through my younger brother’s research I now know you can’t cook an unpunctured egg in a microwave.

Many years ago our Ian tried this method as an alternative to boiling an egg. It wasn’t long before the egg exploded with such force it blew the microwave door open covering my shocked sibling with egg yoke and shell fragments.

It was a rare culinary failure for my inquisitive brother.

I wish I had his and my dad’s love of creating a meal from scratch. However, I’d rather be creative at my laptop keyboard than in the kitchen wearing lycra cooking shorts, a red camisole top and a chef’s hat! ….. What do you mean that isn’t normal attire when preparing food!…… Bloody hell, I best pass that onto Mally and Ian pronto.

The only menu I’ve invented is a breakfast dish, which came to me one day when all we had in the pantry were a tin of beans, crumpets, a jar of marmite and a tub of creosote (I’m going to have to stop storing wood stainer in the kitchen cupboards!).

From those meagre ingredients I whipped up a reasonably healthy brunch, exquisite of taste and kind on the pocket……. Unless you include lobster to my recipe. See above for the cost implications of adding lobster.

As I looked down on that inaugural attempt at the dish, which I imaginatively called ‘Marmite on Crumpets with Beans’ (you’ll note I omitted the creosote again!), I welled up at the thought I’d created a new meal.

I now knew how Scotsman Frank Ready-Brek felt after inventing porridge when he inadvertently spilled hot milk onto his oats (not a euphemism).I was so inspired by this I vowed to write a recipe book with the working title of ‘Gary Strachan’s Recipes Without Creosote’.

‘Marmite on Crumpets with Beans’ – A Utopian Breakfast 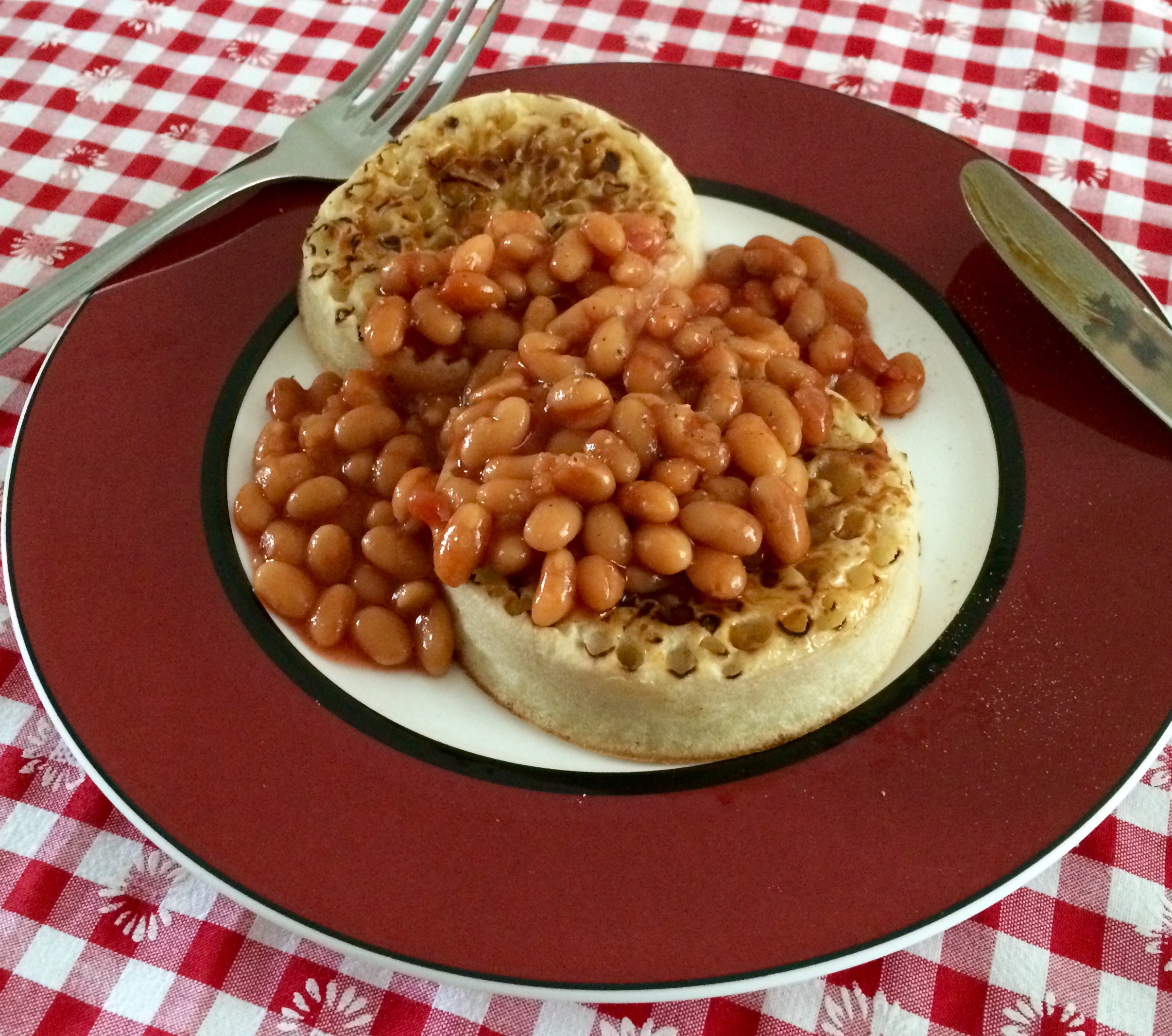 Unfortunately, I haven’t yet got any other recipe to include in my culinary guidance tome, so ‘Marmite on Crumpets with Beans’ currently sits in isolation amongst the books guilded pages.

I was going to add another innovative recipe idea, which was porridge with creosote, instead of hot milk……. I got this idea when I spilt creosote onto my oats (again, not a euphemism), while carrying the stainer tub from a kitchen cupboard to the garage.

However, due to it to presence of wood preservative in that recipe, I am unable to include it in a book called ‘Gary Strachan’s Recipes Without Creosote’. So it’s back to the old culinary drawing board!

Anyway, I’m off now as I have an unerring urge to shout “Bollocks!!” really loudly outside of my back door!