I watched the movie The Limitation Game yesterday evening. The 2014 espionage drama, based on a true story, earned Benedict Cumberbatch a best actor Academy Award nomination.

His portrayal of the social awkward mathematical genius Alan Turing was certainly worthy of that recognition. Unfortunately for Cumberbatch, he lost out on the Oscar that year to fellow Brit Eddie Redmayne for his portrayal of the equally clever Stephen Hawking in The Theory of Everything.

The story touched on Turing leading a team of crossword puzzle, Jenga and Kerplunk enthusiasts, as they sought a method to crack the German Enigma coding machine that wreaked havoc on the allies during WWII.

In addition the movie broached his public exposure as a homosexual (when it was illegal) in the early 1950’s, along with its repercussions.

I’m not going to spoil the plot for you, other than to give you the good news that Britain and its allies won WWII. 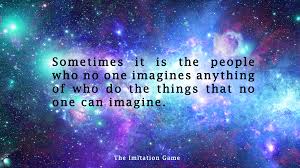 The level of intelligence on show from the main protagonists was frighteningly impressive. As a contemporary intellectual comparison, it was like watching all of the brain box Chasers on the TV general knowledge show The Chase trying to decipher the brilliant mind of 9ft tall TV clever shite Richard Osman.

As I watched the movie, all I could think of was I’d bet these lads and lass (Keira Knightly) would have a good chance at winning the Great Missenden Cricket Club’s Tuesday night pub quiz.

That being said, I think Alan Turing and his cohorts (were they around today) may not possess the intellectual wherewithal to beat the Eggheads quiz team, on the TV quiz of the same name.

If I was giving a review of the movie for the advertising poster blurb it would probably look something like:-

“A socially awkward genius who fought the odds to help defeat evil! But enough about Barry from Eggheads…… The Limitation Game is better than watching Philomen’s Tuck!”            ***

“My aunt Ada likes Philomen’s Tuck but prefers The Limitation Game because Sherlock’s in it!”       ***

Barry from Eggheads – Fighting evil from behind the buzzer! 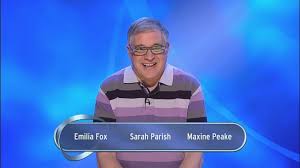 After the movie concluded, Karen and I stood and sang the National Anthem as her traditional values dictate. I sang God Save The Queen, however my missus chose to sing the German anthem of Deutschlandier. After watching an espionage movie about WWII, I started getting concerned about where her loyalties lay.

I could help thinking after we’d finished the anthems and had sat back down, that I wish Alan Turing and his team were still here. I really could do with a machine to decipher what my father-in-law in trying to verbally communicate.

He communicates in a sort of British version of old wild west frontier gibberish that I find hard to understand. I’m growing tired of disingenuously smiling and pretending I’ve understood what he has said to me, resulting in me seeking a solution to the conundrum

With the help of Turing and his cronies I might have been able to find out what the words niff nafs, toodly woodlies and snagpots actually mean!

Never mind, I’ll have a word with Richard Osman, CJ, Barry and that fat Chaser to see if they can assist.