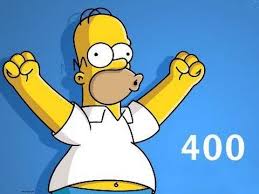 The number 400 is not an overly special number for anything in particular. At least not for any one thing that immediately springs to mind.

The only thing that immediately jumps out at me, apart from Karen who’d for some reason was hidden in a cupboard, are 400 metres is the distance of the circuit of an athletics running track.

I suppose an HTTP Error 400 when attempting to connect to a website is a reasonably common occurrence. This response, I’m told by a technical acquaintance, refers to your browsers request message being unrecognised by the destination webserver…… No I’m not sure what that means either!

Thinking about it, this year the number 400 has had a special place in the hearts of the fans of playwright William Shakespeare. All over the developed world and Birtley, celebrations have been held to commemorate 2016 being the 400th anniversary of the Bard’s death. 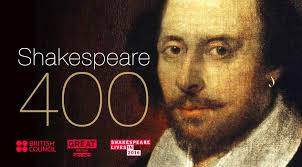 The numeral 400 also has visibilty in the book ‘Around the World in 400 Days’, which was the lesser known sequel to Jules Verne’s ‘Around the World in 80 Days’. I’ve not read the sequel, however I’m told that the second journey took five times longer as a result of Phileas Fogg foolishly employing my wife as navigator.

So I suppose there are a few more special uses of the number 400 than I first thought. None of them are particularly startling, but it goes to prove that particular numeral does have a place in our culture on some level.

Well the simple answer to that question is that today’s narrative is the 400th blog I’ve published on my website writesaidfred.org …………… Incidentally, in future can you ensure when asking a question you’re not eating a sandwich at the time. I could hardly make out what you were asking; not to mention you covered me in chewed organic flatbread!

Some might say my soliloquy in the previous paragraph was a tad confrontational. Statements delivered in an unnecessary aggressive manner. A friend did once mention that on occasion the person I portray in my writing doesn’t reflect the relatively quiet guy he knows.

To be honest he was right. I occasionally put on the confrontational demeanour in my ramblings to enhance the grumpy middle aged man caricature I attempt to portray in my monologues. It’s a trick employed by many writers, including late comedian Les Dawson.

Does my trick work? Well if you think I’m a grumpy bugger after reading the pieces of work, I’d say it did…… If I don’t exhibit this lack of generosity of spirit, then it doesn’t.

I wanted this ‘special’ blog to be one of my more accomplished efforts. After all, it’s not everyday you’re sat in your dining area, drinking water, admiring the red begonia tubs outside, eating cola bottles, wandering what’s for lunch and reaching the landmark of 400 blogs written.

However, I feel distinctly under-whelmed by the whole experience. Self-doubt haunts me. Thoughts rattle around my sleep-deprived mind that hundreds of hours in front of my laptop over the last 16 months have been wasted.

I thought I’d re-read some of them and hopefully gain some re-assurance that my creations are better than I give myself credit for. So with this in mind I entered writesaidfred.org into my browser.

A second or so later my hopes of seeking some literary redemption were foiled when a ‘HTTP error 400’ appeared on my laptop screen, instead of my website!…….. Aaaarrrrggghhhh! 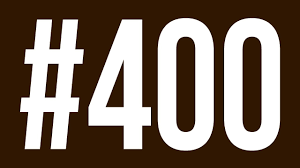