I’m home alone today as my wife and daughter are in London. They have ventured to where the streets are paved with gold to take in the Saturday matinee of a West End show.

There seems to be a disparity in the level of thoughtfulness, not to mention generosity, shown by my daughter to her parents. For example, at Christmas Karen got a Faberge Egg from Rach; while I got an aerial photo of my house and a Flanagan & Allen CD boxset.

For those unfamiliar with Bud Flanagan and Chesney Allen, the duo rose to fame with their music and comedy double act during World War II. Bud Flanagan was also famously the vocalist on the theme tune of the BBC TV comedy ‘Dad’s Army’

To make the aerial photo an even less palatable present it turned out that it wasn’t even my house on it! That honour went to our local ‘Pets At Home’ store. 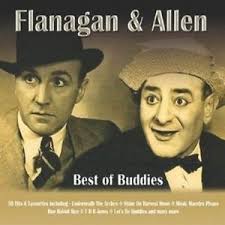 Earlier this year I was given a well meaning tip by a friend on how to deter cats defecating in my garden borders. Voices in his head (which he bizarrely took to be the spirit of late singer Prince) told him to strategically hang up his CDs on canes amongst my shrubs and flowers. The theory being that the reflection on the CD would frighten off the moggy.

I’m not sure why Prince’s spirit was advocating only using his cd’s (unless he wanted to post humously boost record sales); however as I don’t own any of his CDs I thought I’d improvise.

As I didn’t intend to utilise the Flanagan & Allen CDs for their intended use, unless they were manufactured to frighten the crap out of cats, my other present from my daughter was utilised as a scarecat. 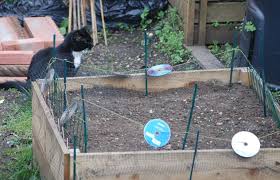 Unfortunately, the tip wasn’t fit for purpose; when two hours after I’d put the reflective discs in my border, one of the neighbourhood cats was sat in the border ‘doing his business’. As the moggy let nature take its course, he looked on disdainfully at the nearby disk, which was flapping like a metronome in the mid-winter breeze..

To be honest, I don’t think the cat was paying much mind to his reflection during number two. Moreover, he was probably thinking that he’d have been more scared if I’d have played the CDs, rather than use them as some half-assed attempt as a reflection deterrent.

I did have the last laugh, though, when the metronomic movement of the disk became more exaggerated with a particularly strong gust of wind. This caused the disk to flap in the direction of the cats head and he was off like a shot!

So, through serendipity the CDs did work at frightening the cat; however, I’d be reticent at using Prince’s cat deterrent strategy on a day of little breeze.

Due to creative differences, Rachel refuses to read my blogs. I’d like to say, though, that on the off chance you are reading this, Rach, I expect a better present for Christmas this year.

In particular, I don’t want any framed photographs taken from the air….. Unless you can get one of the Next store at Colton, which I’ve heard is impressive from the sky!

Talking of deterrents, as I’m home alone I best go set up an elaborate series of traps to dissuade these guys burgling my house! 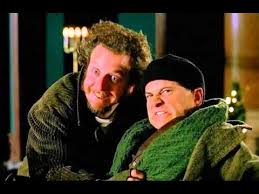 Hopefully, I’ll return tomorrow with another blog; so long as Harry Lime & Marv Merchants don’t get past my various torturous traps and steal my laptop!…… What do you mean “Good luck Harry and Marv!”?

By the way, does anyone want to buy an aerial photo of our local ‘Pets At Home’ store?